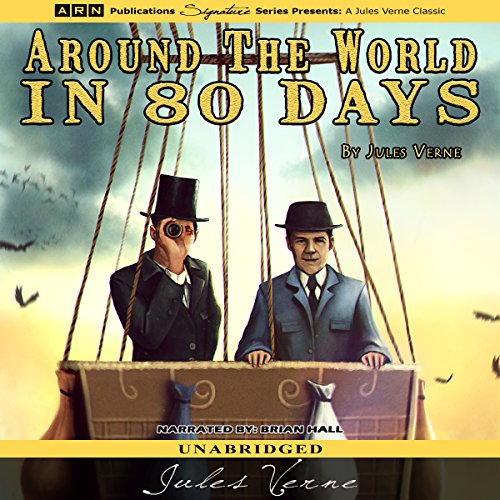 Around the World in 80 Days

Nowadays, it would not seem an insurmountable task to make it around the world in 80 days. Yet, when Jules Verne published this novel in 1873, this was a phenomenon that many doubted was remotely possible.

We are at first introduced to Phileas Fogg, who lives in London and has just fired his valet for silly reasons. Fogg then hires Jean Passepartout who, at the time of hire, has no idea of the adventure that his new boss will take him on. Fogg learns that it is now possible to travel around the world - starting and ending up in London - in only 80 days. Though he believes it is impossible, he attempts it anyway and takes Passepartout with him. Their initial itinerary features eight total stops around the world and, with each stop, there is a new set of challenges and escapades that face the two of them.

Around the World in 80 Days is a listener's ticket to some of the most intriguing locations throughout the globe. Verne allows us to cheer on Fogg and Passepartout as they rescue a young woman in India, encounter structural dangers in San Francisco, and endure a string of missed connections between their destinations. And while their journey is emotionally gripping, it is nothing compared to the very end of the novel.

What listeners say about Around the World in 80 Days

Loved the book, I enjoy this very much. Mr. Brian Hall is brilliant to listen, too. Thank you!