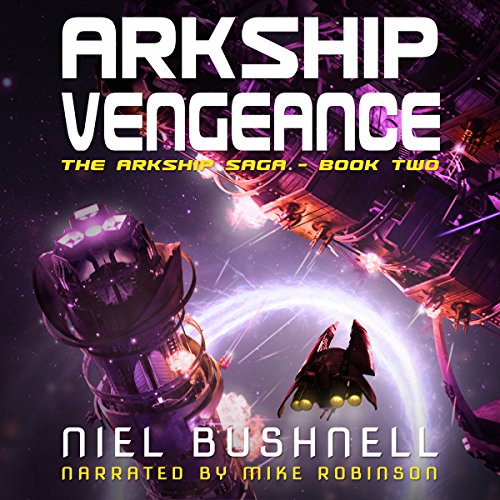 By: Niel Bushnell
Narrated by: Mike Robinson
Try for £0.00

"Bushnell knocks it out of the park again with Arkship Vengeance!"

Earth has been destroyed, the entire solar system turned to dust by a cataclysmic event known as the Fracture. Now, the last survivors of humanity live on vast arkships drifting through the Cluster, fighting for survival in this hostile, ever-changing environment.

Having spent two years in hiding, Wynn is desperate to test out his newly constructed arkship, the Vengeance, and put a stop to the expansionist ambitions of the House of Draig. But Wynn's first skirmish exposes his lack of experience, and his plans for revenge soon lie in ruins. Hunted, outnumbered, and on the brink of extinction, Wynn must find a way to save his family and friends before the House of Kenric is lost forever.

Arkship Vengeance is the second book in the highly acclaimed Arkship Saga series. If you liked Battlestar Galactica, Isaac Asimov's Foundation series, or The Expanse, then you'll love this saga from award-winning author Niel Bushnell.

What listeners say about Arkship Vengeance

Wynn is back and badder than ever

Arkship is one of those series that continues to improve as it goes along. Granted, there are only two books in this series, but the progression in both the writing and narration is clear. I really respect that things continue to improve. I hate it when a writer or narrator is satisfied with the status quo.

This book picks up two years after the first book. There has been a time of repairing and rebuilding, and our man Wynn finds himself in a leadership position. The problem is, he lacks the experience to pull off the job and soon his hopes for stopping the House of Draig are dashed on the rocky surfaces of an asteroid shore (metaphorically). He has a lot of things to deal with such as spies, betrayal, and space battles that really amp up the tension and the sense of danger that Wynn and his family is in. The real test comes from Wynn having to learn to overcome these adversities and making survival a priority over vengeance (not his ship, the "I shall Avenge you" kind of vengeance). Bushnell's writing is deft and tight, and filled with action and drama.

Robinson has made great strides since the first book. He is confident in his tones and adds more emotion than ever when events unfurl that need a bit of excitement. As a newer narrator he seems to have found that solid ground that is needed to allow a performance to come out naturally. He is comfortable with his characters, and you can sense their emotions as he speaks for them. I have noticed a lot of improvement, particularly in his pacing. I can see a lot of big things coming in his future. I thnk his female voices have improved a lot since the last book, too. I feel he is a really good fit for Arkship.

I look forward to more in this series, as it is really shaping up to be a grand adventure. One thing I love is that this is not recognizable as a sort of Star Trek or Wars universe. The closest thing I can see as a parallel is Battlestar Galactica, and that only insofar as that series dealt with the survival of humanity as well.

Niel Bushnell have done it again !!!

I could summarize it by just saying “perfection ‘ ,
But it deserves more,:
Truthfully I couldn’t see how the author can top Arkship Obsidian but somehow he managed to pull it off.
Excellent continuation to book one, beautifully written and excellent performance.
This is exactly what we all wish for in a series and so far it’s working beautifully, so good that I can’t wait for number 3 to come out !

I really enjoyed the book and I can pretty much guarantee that all SiFi fans will so I absolutely recommend this book !

I have the first book as well. The series just keeps getting better and I look forward to when book three comes out!

Sci-Fi at its best

I didn't know if I would enjoy this book because I'm not really a sci-fi future fan, but this book had all that you could ask for in mystery and romance. I would recommend this book and the series.
I received this free for an honest review from the author or narrator.

This is the second book in the Arkship Saga. The families continue their war. It contains much destruction and betrayal as well as finding true friends.

This book was well written. The narration was great.

Maturity of characters is slow but progressing. I hope the following books are soon available in audio also.

I received this audio book for free in exchange for my honest review. This very excellent story is well written and accompanied by stupendous narration. I'm sure you will enjoy it.

Just as good, if not better than the first

If you enjoyed the first Arkship book, this one is just as good if not better than the first in the series. If you haven't read/listened to the first one, pick it up first. This book is a continuation of the first and I think it would be confusing to start with this one. I really enjoyed the book and the narration is spectacular. I wouldn't hesitate to read/listen to more books by this author or this narrator.

House of Kenric had spent the last two years rebuilding under the protection of the Church and though they needed more time to rebuild and test out their ship it was not given to them. The House of Kenric and the House of Draig must meet up, step-brothers must finally confront each other in war. This is a fast pace but so totally enjoyable Sci-Fi novel which keeps you listening to the wee hours of the night! The author,Niel Bushnell, once again weaved a fabulous story and the narrator, Mike Robinson, once again portrayed each character perfectly! Bravo to you both.