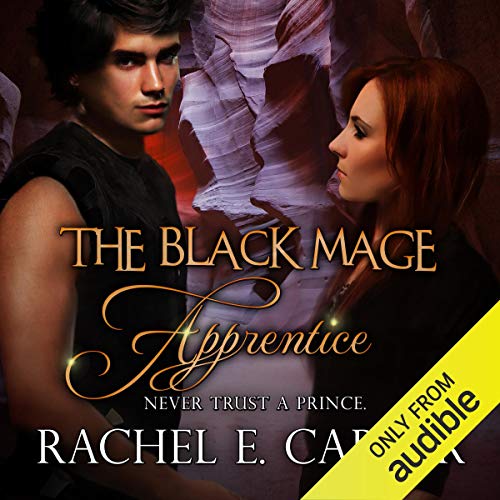 By: Rachel E. Carter
Narrated by: Melissa Moran
Try for £0.00

She survived a trial year at the Academy, but that was just the easy part....

Now 16-year-old Ryiah is an apprentice of Combat, her school's most notorious faction of magic. When she finishes she will be a mage, but in order to do so she has to survive four years with a training master she hates and her old nemesis, Priscilla. To make matters worse the unwanted attraction Ry feels for her sometimes-friend-sometimes-rival Prince Darren is at an all-time high - even though he is betrothed to the very girl she can't stand.

Really, the only bright spot to Ryiah's new life is the time she spends with her friends, including an older apprentice named Ian, who she finds herself thinking about quite often.

Just when things start to get comfortable they take a turn for the worse. An apprentice is killed in a rebel attack and several mages end up dead. Unwittingly, the apprentices find themselves in the midst of a budding unrest between Jerar and its northern neighbor, Caltoth. For Ryiah the impending conflict means many things, but as her apprenticeship draws to a close she finds her biggest problem at home.

Unfortunately for her, Darren's not going anywhere.

What listeners say about Apprentice

What was most disappointing about Rachel E. Carter’s story?

The twist at the end made no sense even after they explained it. It made Ryah seem weak and not like the Black Mage she wants to become. I don’t think I will read book 3.

Would you listen to another book narrated by Melissa Moran?

No. Her voice is so monotone

The book had its high moments but the love story was very broken and unsatisfying. It also does not match the kindle version on the book. In this version the Ryah seems weak and love sick. In the Kindel version she is much stronger and stands up for herself where Ian and Darrin are concerned. I didn’t enjoy this book. There was also a lot of things going on behind the scenes with rebels that that the book did not go into. I wonder what’s really going on in the kingdom.

I read a lot of books and I dont find many that keep my interest for long ut this series has done it in spades. love all the banter and great story building.

I admire the writing of young adult and children's books, as I feel they are held to a higher standard, but I especially like them when I forget they are targeted for young adults or children, particularly the former. This book served up many reminders that it was (very) young adult, with a stunning amount of teenage angst. It was a jolt to be reminded of how young the characters were, when they were constantly in brutal, adult combat, when not suffering excessive angst. I don't know whether or not I will read the next in the series--this was certainly readable, but I don't care a lot about the characters now.

The narrator was fine for all characters except Darren...it really influenced how weird I thought he was. The cover is quite bad.

Terrible terrible cover, but awesome book! One of the best mage books I’ve read in a while.

It was a good story that I really liked. I want to continue this series.

While I enjoyed the first book very much and plan to continue the series, this one seemed like a whole lot of filler. The timeline was a little confusing, until I realized that the author was trying to cram the next four years of Riyah's Mage training into a single book. As a result, it felt rushed and awkward to me. On top of that, the love triangle was infuriating. It seemed out of character to me that Riyah would be so immature, indecisive, and obliviously hurtful to a friend. I would recommend the read solely for the purpose of keeping yourself abreast of events if you plan on continuing the series.

why so much time on the whole ....he loves me, he hates me and I need a man. ugh

I was intrigue by the first book. But the second book made it hard to continue.

I like the books a lot. yet this one had a good amount of crying and pining, i think it is a set up to the next book. so give it a chance

Have you ever looked over something, and you thought it was one thing and it turned out to be something else? That’s what this series is, it looks like a sword and sorcery novel but what it really is, is a romance series with elements of sword and sorcery thrown into it. Now I’m not against romance as part of the story but in a fantasy genre it shouldn’t the whole story. With that said I can’t recommend this book nor will say not to purchase this book. I say that because, it has some elements I like but not enough and sadly the main character might get on your nerves a bit, but I will let the buyer decide.