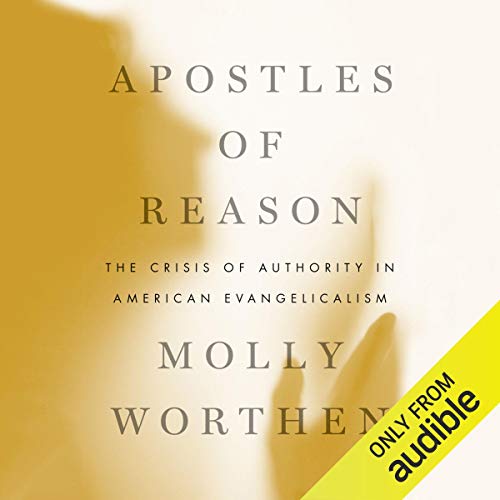 By: Molly Worthen
Narrated by: Stephen McLaughlin
Try for £0.00

Evangelical Christianity is a paradox. Evangelicals are radically individualist, but devoted to community and family. They believe in the transformative power of a personal relationship with God, but are wary of religious enthusiasm. They are deeply skeptical of secular reason, but eager to find scientific proof that the Bible is true. In this groundbreaking history of modern American evangelicalism, Molly Worthen argues that these contradictions are the products of a crisis of authority that lies at the heart of the faith. Evangelicals have never had a single authority to guide them through these dilemmas or settle the troublesome question of what the Bible actually means.

Worthen chronicles the ideological warfare, institutional conflict, and clashes between modern gurus and maverick disciples that lurk behind the more familiar narrative of the rise of the Christian Right. The result is an ambitious intellectual history that weaves together stories from all corners of the evangelical world to explain the ideas and personalities - the scholarly ambitions and anti-intellectual impulses - that have made evangelicalism a cultural and political force.

In Apostles of Reason, Worthen recasts American evangelicalism as a movement defined not by shared doctrines or politics, but by the problem of reconciling head knowledge and heart religion in an increasingly secular America. She shows that understanding the rise of the Christian Right in purely political terms, as most scholars have done, misses the heart of the story.

The culture wars of the late 20th century emerged not only from the struggle between religious conservatives and secular liberals, but also from the civil war within evangelicalism itself - a battle over how to uphold the commands of both faith and reason, and how ultimately to lead the nation back onto the path of righteousness.

What listeners say about Apostles of Reason

I heard this book touted as possibly the best book on evangelicalism written in the past twenty years. It was definitely enlightening & thorough, well worth the listen!

The narration was adequate for the most part. I must say I was disappointed, however, to find the work of a female scholar narrated by a male voice. Since patriarchy & the silencing of women's voices is a strong undercurrent (if not major theme) in parts of evangelicalism, I would very much have appreciated having this book read in woman's voice, instead. (Also, the narration had some rather startling mispronunciations, notably of Goshen College & Bill Gothard.)

Apostles of Reason have been so helpful to me for understanding the development of both global Christianity, and my own knowledge of evangelical organizations in the US. Dr. Worthen's breath of knowledge of the Christian world in the last 100 years, and the behind-the-curtain goings-on is remarkable. I’ve dealt with many of the groups discussed in the book, but always from their own points of view which, of course, tend to be negative to others. It's wonderful to hear a view from the outside without any conflicts of interest.

To me, the title captures only partially what the book is about. It's much more than just examining the role of logical thought, and I would not let the title dissuade you from listening, The book does make a point by surveying others and their histories, that modern evangelicals have made reason prominent in their presentation of the faith. Worthen shows that many other groups don't put such importance on logic and debate, and this has caused division. Maybe there are other books that cover the history and styles of modern evangelicalism, but I haven’t found them. I hope you listen, will find some truth, and are enriched!

Apostles of Reason should be required reading for anyone going into full-time ministry. Her descriptions of the movements and personalities that have shaped American Evangelicalism are dead-on.

Interesting history of Evangelicalism in the 20th Century

A through and relatively engaging look at the history and intellectual influences of the Evangelical church. Now the most engaging topic but for those who lead in the church this is a book worth reading.