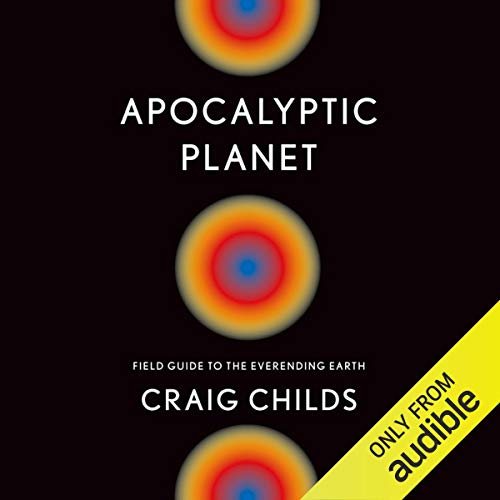 The earth has died many times, and it always comes back looking different. In an exhilarating, surprising exploration of our planet, Craig Childs takes listeners on a firsthand journey through apocalypse, touching the truth behind the speculation. Apocalyptic Planet is a combination of science and adventure that reveals the ways in which our world is constantly moving toward its end and how we can change our place within the cycles and episodes that rule it.

In this riveting narrative, Childs makes clear that ours is not a stable planet, that it is prone to sudden, violent natural disasters and extremes of climate. Alternate futures, many not so pretty, are constantly waiting in the wings. Childs refutes the idea of an apocalyptic end to the earth and finds clues to its more inevitable end in some of the most physically challenging places on the globe. He travels from the deserts of Chile, the driest in the world, to the genetic wasteland of central Iowa to the site of the drowned land bridge of the Bering Sea, uncovering the micro-cataclysms that predict the macro: forthcoming ice ages, super-volcanoes, and the conclusion of planetary life cycles. Childs delivers a sensual feast in his descriptions of the natural world and a bounty of unequivocal science that provides us with an unprecedented understanding of our future.

What listeners say about Apocalyptic Planet

Travel-log of the maybe apocalypses

Yes, depending on the friend.

What other book might you compare Apocalyptic Planet to and why?

Nothing I have ever read, very strange but interesting combination of investigative journalism, environmental doomsday, and travel-log.

Which character – as performed by Craig Childs – was your favorite?

I found this book very interesting and can imagine this being a favorite of some people. It is an unusual combination that mostly worked for me. I am of a scientific bend and found this light in that department, little on the fear-mongering side for my taste but only just. I would recommend giving it a try for the novelty if nothing else and you may love it.

Another captivating book by Craig Childs

I came away form reading this book with a new perspective on earth. Will the world end in fire or ice was Frost's question. Here are some viable answers.

Anyone who has ever read Craig Childs writings will love this audiobook. The work itself is a wonder of global exploration that reads like science fiction. Maybe even to much so. That this world that we know has died and been reborn many times the story provides cold comfort. At points during these stories my feelings alternated between a profound depression and a deep sense of relief. Yes, this planet will go on beyond the injury done to it by we humans but the probable extinction of my own kind or at least the civilization that we have built weighed heavy on my soul.

Childs prose reaches the level of poetry often in the stories presented. Word pictures painted by the mind of an artist are sometimes lyrical and at other times horrifying but always edifying. His reading his own work was superb. I hope he will consider putting his other works into audio for those of us that love to hear the spoken word.

I recommend this audiobook.

You will not want to pause this book.

authors own ramblings about his teenage travels.

nothing of scientific value or insight here. this is a road travel diary. i wasted my credit for nothing.

If you’ve listened to books by Craig Childs before, how does this one compare?

What aspect of Craig Childs’s performance would you have changed?

The editing was odd. I heard him pausing, taking breaths, etc. That stuff should have been edited out. It's like they rushed to get this published instead of doing a few extra takes and editing together the best reading.

Not my favorite. Could have been condensed or could have included more research, but then it wouldn't have been an adventure story.

I’m a long time Childs fan but never got around to this book until now. I’m glad I waited—reading it during the coronavirus pandemic was the perfect grounding mechanism for my soul. I was glad to be immersed in a much longer timeframe and the expanse of associated thinking. Sure, it’s apocalyptic but that’s what I expected—I didn’t expect to end the book feeling hopeful about the future! It was lovely to get lost in the adventures that Childs narrates.

This audiobook transports readers to extreme, otherworldly environments on Earth that most folks don't get to experience firsthand. It puts into perspective the fascinating history and future of the planet, which will continue with or without us.

Listening to this may be difficult for anyone who’s ever suffered through a long monotonous poetry reading. Craig Childs goes for “literature” and overshoots. It is written like a prose poem, distractingly wordy. It’s also written in first person, present tense, which, at least in nonfiction, never fails to sound pretentious – this is not an exception.