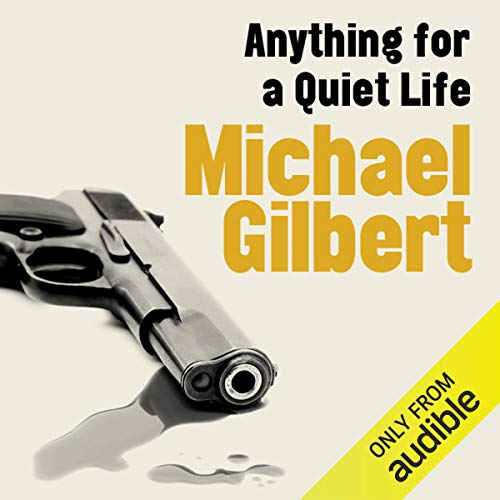 Anything for a Quiet Life

By: Michael Gilbert
Narrated by: Christopher Scott
Try for £0.00

Jonas Pickett, solicitor and commissioner of oaths, leaves London to set up a practice in a genteel Sussex resort. This collection of nine inter-linked stories tell the stories of his clients: from a retired Admiral to the queen of the gypsies.

Michael Francis Gilbert (1912- 2006) is recognized as one of the most versatile British mystery writers. He was a lawyer in London for many years and at one point had Raymond Chandler as his client. He wrote almost every sort of mystery and thriller. He wrote police procedurals, spy novels and short stories, courtroom dramas, classical mysteries, crime novels, and almost every possible combination of these, all with the same competence and dry, detached wit. Gilbert was a founding member of the British Crime Writers Association, Named Grand Master by the Mystery Writers of America and was named Number 24 on The Telegraph's "50 crime writers to read before you die".

What listeners say about Anything for a Quiet Life

This was a Michael Gilbert book new to me. The linked short stories worked well in audio format and I very much liked the narration.

A great collection of short stories by Michael Gilbert, one of the great writers of detective fiction - in fact one of the greatest. As a barrister he was excellently placed to write court-room and police procedural novels.
His characters are very well-drawn and his plots are gripping. Rather more modern than Agatha Christie, I find his work infinitely more believable and cannot understand why so few of them are available on Audible or Kindle.

I have listened to other Michael Gilbert and enjoyed them, but this is my favourite, the narrator is clear and easy to listen to.
Sorry there are no others by this author on Audible.

These connected stories are amusing, elegantly-written, and engrossing. Michael Gilbert is one of the very best of the Brits, not nearly well enough known. His books encompass every kind of mystery and thriller: these are legal conundrums, far more interesting puzzles than Rumpole ever constructed, and told with cool detachment but no lack of suspense. As story follows story, Jonas Pickett's new life unfolds and complicates and resolves. High recommended—and great re-listening, too.

Anything for More Michael Gilbert

Engaging as mysteries, these stories also stand up well as stories, pure and simple. Their interconnected narrative gives you a three-dimensional view of the sleepy Channel-side hamlet in which each is set; the characters and their interactions entertain and intrigue just as much as the accompanying murder, mystery and mayhem. Another reviewer (Marina) prefers these to the Rumpole stories and I couldn't agree more--their underlying bonhomie trumps John Mortimer's practiced cynicism.

Christopher Scott's impeccable performance shines through a somewhat creaky recording quality—a low-level room tone runs throughout and, in one story, the level dips and rises for a few seconds like a cork in a duck pond. But the excellence of the content overrides these distractions. Encouraged to buy this on the strength of his Smallbone Deceased, Michael Gilbert did not disappoint. Surely, he deserves more attention, and more recordings.

Successful, middle-aged solicitor Jonas Pickett decides he's saved enough money from his north London practice to support him for the rest of his life and that qualifies him for semi-retirement somewhere more relaxing. He takes himself off to Shackleford, a quiet beach town not far from Brighton, and sets up in a practice that he hopes will be only successful enough to keep him from getting bored.

Pickett has his acerbic secretary, Claire, his super-competent but somewhat contrary partner Mrs. Mountjoy, and his general factotum (and sometime bodyguard) Sam, all of whom seem sometimes to be conspiring to turn the new practice into a full-time job.

This is a collection of nine interconnected stories that were originally published in the Ellery Queen Mystery Magazine. Stories cover such subjects as hostility toward a gypsy encampment, crime associated with the annual August fun fair, treasure trove sought on a local farm and more. Michael Gilbert's dry humor is in good supply, the stories are entertaining but not too mentally taxing, the good guys are vindicated and the bad guys vanquished. What's not to like?

Excellent narration by Christopher Scott. Minor issues with the production value. There is a faint hiss and a couple of times (especially toward the end of Chapter 7), the sound is muffled for a few seconds.

I have this book in my collection and just plain love it. That's why I was so glad to see Audible had an audio copy of it on their site, that way if I ever get the hankering to follow Jonas and his solicitoring adventures, its only a few clicks away. Though I do wish Audbile could separate the audio files by chapters instead of having it in one large chunk of audio. Oh well.

The reading of the book is done very well, and I enjoyed every second of it. The reader changes his accents and voice to help the listener differentiate between characters, which was something I had worried about before getting this audio book.

The book is about Jonas Pickett and him giving practical legal advice to the citizens of Shackleton, a resort town, but for the most part the book focuses on the mysteries of the events and the characters themselves. So no worries for those that are thinking this is heavy with legal jargon, its an easy and delightful listen.

Written in the 80s I think, and very English with clever plots, engaging characters, perfect atmosphere and excellent dialogue. These short stories or chapters of the same story are as good the second time around as the first. Highly recommended.

I love Gilbert and these stories are vintage. Please produce the Calder and Berens ones on audible as well!

The main character is a viewer rather than much of a participant. These where a collection of short stories, and maybe I would try a novel by the author. But I have to say that other authors do this kind of story much better. Agatha Christie,David Rosenthal, and a new author I just found Peter Grainger.