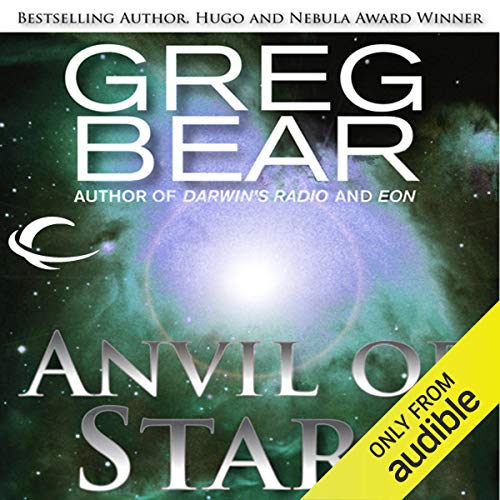 By: Greg Bear
Narrated by: Stephen Bel Davies
Try for £0.00

The Forge of God described the destruction of Earth itself by self-replicating robots, Von Neumann machines designed to use the planet's mass to create more robotic creatures and spread throughout the Galaxy. Only a few humans have survived, aided by a mysterious alien race known only as “The Benefactors”, who arrived at Earth too late.

Now the small group of human survivors is determined to track down the criminal race who launched the planet killers. Humanity is given a starship by The Benefactors, and driven only by revenge they set out to find the unknown beings who are responsible for the destruction of Earth, and many other worlds.

What listeners say about Anvil of Stars

20 years on and still brilliant!!

After I read 'Eon', almost 25 years ago, I immediately became a hooked on the science fiction of Greg Bear and read them all!. 'Anvil of Stars' was always my favorite and I was so pleased to see so many of his older books suddenly available in Audible. I downloaded this one immediately! Do you need to read 'The Forge of God' first? Well... yes... probably best... if only for continuity, but this really is a stand alone story. With echoes of 'Lord of the Flies' and 'Enders Game' it mixes the super science and colossal scope from the likes of Alistair Reynolds and Peter Hamilton with the social and moral plight of a group of children (reminding me of Orson Scott Card) as they journey to avenge the desctuction of the Earth. Loved it!

I’d rather read a book on tax law

This is without a doubt the worst book I’ve ever read/listen to... I tried both in an effort to give it a chance.

The characters are lifeless and uninteresting, and the dialogue gives the impression it was done by a monkey smashing a keyboard.

After the Forge of God, this is an utter disappointment. I strongly recommend that anyone that might have done the first book leave it at that. This will only be a waste of time.

approached one of my favourite books from the 1990s with apprehension, but was very pleased; unabridged, the reader did very well, different characters (and species) get distinctive recognisable voices, interesting story well paced

the story reads like a TV series, I found the dialogue dry at times and a little cliche.

One of the few i listen every few years A+

It is a mix of lord of the files, aliens encounters and capital punishment, ie how can you be sure. Particularly interesting aliens introduced, that form never seen elsewhere, its well narrated too.

Where does Anvil of Stars rank among all the audiobooks you’ve listened to so far?

This book has some interesting ideas about technology and how advanced alien races would defend themselves. It ranks amongst the top ten SciFi books I've read so far.

The action parts where stuff is happening and techno babble is on rapid-fire.

Long winded, but worth it

Very long and winding story. Very different than Forge of God. If I didn't know better, I'd think this was written by a different author. Took me several months to get through, because finding my place again was difficult each time, do to very long chapters. Great dialogue and character development. Hard to track at times. Conclusion well worth the wait. 👍

What happens if you mix Forever War with Lord of the Flies? This thing, apparently. While it carries over many of the weaknesses of Forge of God - most notably terribly annoying characters - Greg Bear remembered that a novel ought to have an actual plot, and so included one this time. Even if it is more than a little contrived. There is also somewhat more character development this time around. I'll also have to add that the "society" depicted on the ship is pretty cringe, including the whole Peter Pan motif and the religious subplot. On the plus side, I felt it evoked a decent "space exploration" feel, and the aliens depicted were interesting. Unfortunately, the narration tends towards the overly dramatic and theatrical at times, and is way too quiet at others - the narrator sometimes yells at the audience, and sometimes is a barely audible whisper. If I have to fast-forward because you're annoying me, or rewind because I couldn't understand what you said, you're not doing a very good job. It's a pity, too, because otherwise the narration could have been quite good. The book works well enough as a stand-alone, so if this series interests you at all, skip the wholly forgettable Forge of God and just get this one instead.

Truly this is an underrated masterpiece- and I don't use that term lightly or often.
Two aspects of the novel keep me returning to it in both audiobook and print form: the insights into the realistic applications of warfare between civilizations and the murky morality in revenge over the span of lightyears and centuries.

The Forge of God was a page-turner. It's hard to believe Anvil of Stars is by the same author. The first six hours of the book is agonizing. It is virtually all angst and neurosis of the main character, Martin. What do his lovers mean to him? How is his affair with the boy different from his affair with the girl? What does it mean to be a leader of young adults on a mission to avenge mankind? In terms of plot, very, very little happens in the first six hours. I could literally say it in a sentence, so I will: In the fifth year of their mission, the children think they have discovered the killers of mankind, and launch the attack. You might think I'm leaving out a ton of plot turns and twists, but I'm not. You could say I've left out a training exercise (boring) and apparitions seen by a few of the crew (even more boring). And of course the ship divides as planned, but that's it. I'm not going to bother with the last two installments. In fact, I've already read the Wiki summary. The narrator is good, and even though I found his "voice" for at least one of the characters irritating (an uptalker? you know, when everything they say rises in inflection like a question?), I would have to say his narration kept the otherwise moribund story on life-support. Sadly, when nothing of consequence had occurred by the end of the first six hours, my interest expired, and the plug had to be pulled.

Cons: Near constant violation of writing maxim "show don't tell", unlikable/uninteresting/cardboard characters with behaviors/reactions consistently begging the question "why?", rife with deus ex machina (ie. significant plot elements/events appear from nowhere), the "sci-fi slang" and general speech patterns are distractingly off (sounding like they were written in the 1930s).

Not sure what to say

I loved forge of God so was excited to read this one. somehow though this book just seemed off to me, it was OK but left a lot to be desired and has filled me with questions. Also I'm over reading about women's breasts so much.

What was that all about?

I made to the end. I kept thinking I would find out what it meant. Maybe it was just above me. I feel like I just wasted so very many hours. So sad!

Always detailed characters you can love and hate against a rich background of altiverse. fantastic book

Still as good as I remember it

I originally read this story back when it came out and I was just a teenager and now when I listen to it again 25 years later I think I enjoyed it even more.

I also have to give credit where credit is due. When I listened to Forge of God I did not care for Stephen Bel Davies performance at all. I thought it was bland and a struggle not to put me to sleep. But, in this book he was so much better. I almost could not believe he was the same narrator. He did an excellent job of giving the characters life, and especially with all of the strange alien voices.