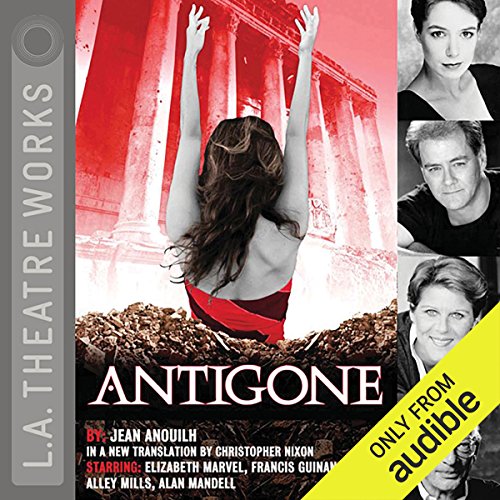 By: Jean Anouilh
Narrated by: Elizabeth Marvel,Full Cast
Try for £0.00

The body of Polynices, Antigone's brother, has been ordered to remain unburied by Creon, the new king of Thebes. Antigone defies the law, sealing her fate. Originally produced in Paris during the Nazi occupation, Anouilh's Antigone was seen by the French as theatre resistance and by Germans as an affirmation of authority.

What listeners say about Antigone

What made the experience of listening to Antigone (Dramatized) the most enjoyable?

The listener is drawn in to an alien but compelling culture. The resolute determination of a strong female protagonist permeates the drama.

Antigone's refusal to abandon convention in the face of death.

over-acted, impossible to get through

What was most disappointing about Jean Anouilh’s story?

The story is great, the audio is the problem

Would you be willing to try another one of Elizabeth Marvel and Full Cast ’s performances?

Again I love the story, I just cant listen to the actors. I couldn't even get through scene 1

A classic is given a fabulous update!

I picked up this play because I am currently directing Antigone by Jean Anouilh (but a different translation). I wanted to get an idea of how this story was changed from the original by Sophocles. And I was so delighted to find the adaptation fresh, new and alive. The LA Theatre Works' actors do such a stellar job that while I was listening to the play I found myself closing my eyes to imagine the how the actors where moving on stage. If you are a lover of myths, classics, and/or theatre then you MUST listen to this play.

I can't recommend this play enough! It is incredibly deep in its ideas and its emotions and there is just enough humor to keep it from being depressing. The actors are all fantastic and their voices fit their roles perfectly. You won't regret buying this one.

This is a deeply beautiful rendition of the play!! That acting is superb, the pace perfect and even the music is quite interesting!

They took one of my favorite stories...

and added humor, I want to cry. I first read this in college, as an undergraduate, and I felt that the heroine explained how I felt about what was happening in the world politically. I have re-read with other administrations, each time feeling that this play sums up how I feel. In this version much if the glory, the grandeur, the gravitas has been removed. Antigone is somehow lessened, a selfish child being scolded by her betters. It was numerous small ways but together they had their effect and I am disappointed. Imaging for a moment Macbeth where instead of, "Out damn spot", someone says, "Guess I'll use shout on the spot". Same general message...very different feeling.

Completely useless destruction of the original

Renders the original Sophocles down to elementary school drivel, this is completely useless for any academic purpose.

Drummed down translation for people who want a generic, 4th grade rendition of this story. Followed by a discussion by the actors who rave about it. Truly pitiful.

A new spin on this timeless tragedy

This was very different than I expected...in all the best ways. Basically it sounds like a recording of a live performance, and that works as a good listen here. But the dialog in this new "translation" is much more modern and really allowed me to relate to Antigone as a contemporary character for the first time. The self-destructive righteousness of her arguments hit home in new ways listening to this play, particularly in her final exchanges with King Creon. Definitely worth a listen if you're studying Greek tragedy and need to find a way to connect to the story - but it's also worth listening to if you want to gain a little insight into what people refer to as the millennial mindset.

An excellent performance of a tragic tale

Antigone is one of the great Greek tragedies, and this reimagining by Jean Anouilh is excellent - historically known during WW2 as a performance which fuelled the French Resistance (through the strong-willed Antigone) and the Nazi occupiers (through the role of the king and the play's notions of obedience to society's laws). This performance stands out as being sophisticated, well produced and excellently cast. It will reward multiple listenings, and sustain your interest over those repeated hearings. Go ahead, Antigone's tale awaits in a new and vibrant form.

I was expecting this to be a translation of Sophocles and discovered it to be a different version. Very disappointing.

Outstanding play. I am going to hear this more than once. My first Antigone play.