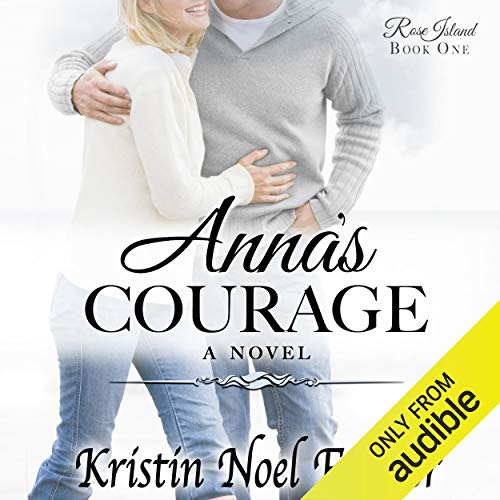 By: Kristin Noel Fischer
Narrated by: Rebecca Rush
Try for £0.00

Anna's Courage is a heartwarming love story about having the courage to be brave in spite of your fears.

Helicopter pilot Anna Morgan hasn't flown since her husband's death several years ago. Instead, the young army widow has sought refuge with her son on peaceful Rose Island. Surrounded by family and friends, Anna vows never to do anything more dangerous than arrive late to a PTA meeting.

All that changes when Captain Nick Peterson comes to the island to take custody of his orphaned nieces. Anna feels compelled to help Nick with the girls, but what is she supposed to do about her growing attraction to him? And will the disappointments in Nick's past prevent him from embracing the power of forgiveness and family?

From the author of A Mother's Choice, comes a new series filled with romance, faith, and healing. Told with humor and sincerity, Anna's Courage will have you yearning to visit the peaceful community of Rose Island again and again.

What listeners say about Anna's Courage

This is an emotional story about loss, fear, forgiveness, courage, love, faith and taking chances.

The narrator did a great job bringing the story to life.

Anna is a window and has been raising her son alone for seven years. Her husband was killed in the line of duty. She has vowed to never get involved with a military man but her heart has other ideas.

Nick is a single man and although he has vowed never to have kids of his own finds himself in unexpected situation of caring for two precious kids. There are ups and downs and Nick has big decisions to make regarding his life and the precious kids he loves so much.

Great clean christian romance. Military wives sacrifice a lot and you get a glimpse of what they can go through and how difficult their lives can be. Faith can help them deal with the hardships of loosing a husband.

This audiobook was provided in exchange for my honest and unbiased opinion.

Anna's Courage by Kristin Fischer is a love story that makes you believe in love the second time around. Anna is a military widow raising her son on Rose Island amidst a host of in-laws and her parents. She has decided that she will live a safe life and stops flying helicopters and is hyper diligent with her son. Her next door neighbors throw a New Year’s Eve party and she meets his brother and share a kiss then runs away. A year later the brother is back due to the tragedy of losing his brother and sister-in-law in a car accident. They have left him in charge of their ten year old daughter and less than eighteen month old daughter. He has never wanted kids because his mother abandoned him and his older brother and his father was a present in body but absent in spirit father and he does not believe he can be a father. The story goes on from there. They are thrown together in his effort to take care of the girls and suddenly they are running into each other or calling on each other for help. Both fighting what seems to be what both need. Each other.
Nick tries to get the girls adopted but can’t let them go and he procrastinates constantly. He finally has two experiences that let him know he not only can’t let the girls be adopted but that he needs and wants God in his life. Anna realizes that she is the witness that God is using to help bring Nick back to Him and also to provide the girls a stable home and reunite with his father.
My favorite quote from the story is “You can’t outrun God. When He wants you He will get you.” The whole story made me more aware of my faith walk with Christ. God is with us even when we try to run away and He is always loving on us.
"This audiobook was provided by the author, narrator, or publisher at no cost in exchange for an unbiased review courtesy of Audiobook Blast."
Find this and many other reviews at believersaprilbookreviews.blogspot.com

Anna, an army widow, and NIck, recently taking custody of his nieces, help each other with parenthood, faith, trust, and love. This is one of those feel good, romance stories that makes you smile at the end.

Rebecca Rush was a wonderful narrator. Her voice is pleasing, and I loved the way she did the children's voices.

Get lost on Rose Island.

What did you love best about Anna's Courage?

I loved listening to Anna's Courage, it was so easy to get lost in the story. I had read the book when it first came out and enjoyed listening to it on audio.

What was one of the most memorable moments of Anna's Courage?

I love the part in the Story where Anna and Nick on New Years where he helps her celebrate a family tradition her son is not there to do.

Rebecca Rush made it so easy to get lost in the characters with the voices she gave each one.

Take a leap of faith.

Widow Anna Morgan, has kept mostly to herself since her soldier husband was killed seven years earlier. Dedicated to raising her son, Travis, Anna, has given up flying helicopters and retreated to her “fall back” job of being a hair stylist, until she happens to meet her neighbor’s brother at a New Year’s Eve party . . . and share a kiss at midnight. Months later, when the couple, who have two sweet kids, are suddenly killed in a car accident, the brother, Nick Peterson returns to learn that the couple have named him as guardian of their two young daughters. But Nick is a soldier, stationed in Germany. How can he possibly take care of two kids? As Anna helps Nick in the interim with the girls, their attraction grows. But Anna holds fast to her mantra: Never fall in love with another soldier. And Nick is faced with his own fears and his plan to remain a bachelor and put his military career first. This is a sweet, clean and faith filled listen. You won’t want to miss it.

Take a chance on me !

What a great love story . They author knows how to draw the reader in from the first chapter .
Nick’s brother and sister in law are in a car accident and do not survive . So Nick is named as the girl’s guardian.
He is a military officer and really does not want to give up his career but he did not know that these two little girls would change his mind .
Anna is a widow after her husband is killed in Afghanistan.
She left to raise her son Travis . She can’t date or marry another military man . The rule holds and that’s it .
What the reader learns that Anna has a secret and this might be the real reason why she shuns away from military men.
The book will pull at the reader’s emotions .
I laughed and also thought about shredding a tear .
I like how god is mentioned through out the book .
With god life can make better sense even for Nick and Anna .
The writing is smooth and keeps the reader wanting to read .
This is a clean romance.
Five stars ⭐️⭐️⭐️⭐️⭐️
The narrator did an amazing !

Such a lovely story of courage

Anna had lost her military husband leaving her with a young son. Nick had lost his brother and sister-in-law to a car accident leaving him with two young nieces. Did Anna have the courage to love a military man again. I loved this story of love and courage.

More than just another romance.

This story was so real to me. I found ways of relating to the characters that are not present in other books of this genres. I was most impressed by the underlying lessons that encouraged me and surprised by the help I found to see something within myself that needed seeing.

Love the storyline. I listened to this book on audible and I couldn't turn it off.