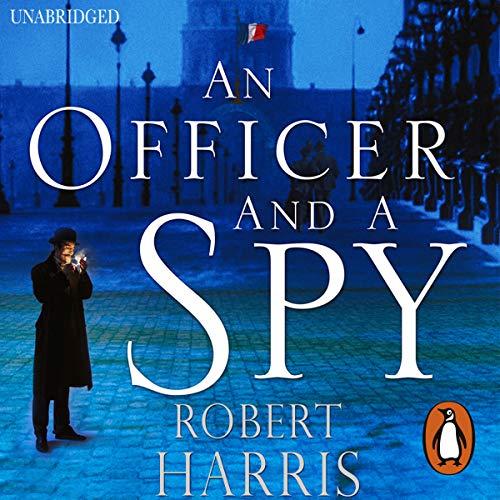 An Officer and a Spy

By: Robert Harris
Narrated by: David Rintoul
Try for £0.00

They lied to protect their country. He told the truth to save it. A gripping historical thriller from the best-selling author of Fatherland.

January 1895: On a freezing morning in the heart of Paris, an army officer, Georges Picquart, witnesses a convicted spy, Captain Alfred Dreyfus, being publicly humiliated in front of 20,000 spectators baying ‘Death to the Jew!’ The officer is rewarded with promotion: Picquart is made the French army’s youngest colonel and put in command of ‘the Statistical Section’ - the shadowy intelligence unit that tracked down Dreyfus.

The spy, meanwhile, is given a punishment of medieval cruelty: Dreyfus is shipped off to a lifetime of solitary confinement on Devil’s Island - unable to speak to anyone, not even his guards, his case seems closed forever. But gradually Picquart comes to believe there is something rotten at the heart of the Statistical Section. When he discovers another German spy operating on French soil, his superiors are oddly reluctant to pursue it. Despite official warnings, Picquart persists, and soon the officer and the spy are in the same predicament....

Narrated by Picquart, An Officer and a Spy is a compelling recreation of a scandal that became the most famous miscarriage of justice in history. Compelling, too, are the echoes for our modern world: an intelligence agency gone rogue, justice corrupted in the name of national security, a newspaper witch hunt of a persecuted minority, and the age-old instinct of those in power to cover-up their crimes.

What listeners say about An Officer and a Spy

Robert Harris really knows how to create tension in a historical novel, where at least in general, we must know what the ending is. This is a beautifully crafted and fast-paced novel, which brings to light one of the great scandals of the19th century and exposes the French officer class as corrupt, paranoid and deeply anti-Semitic. If I could criticise at all, the courtroom scenes do drag on a bit, but for those familiar with Imperium and Lustrum, the wealth of detail revealed will compensate. Also the reader is excellent, perfect pace and very believable accents, including the very difficult (for a man) women's voices.

This book takes you immediately into scenes from history text books but in such a way that it becomes immediately engrossing and relevant for today. The subtle details which pave the way for the central character's change of heart are fascinatingly drawn for us. I also very much enjoyed the insight into the life of an early spy.
Although, I remembered vaguely what the Dreyfus Affair was about, I had to restrain myself from looking up the details to find out what became of them all! This ought to be compulsory listening for anyone studying the literature or history of that period as it brings it all to life in such a meaningful way.
The narration of this compelling story was excellent, with superb vocal characterisation.

Fascinating and compelling - a great listen

If you could sum up An Officer and a Spy in three words, what would they be?

Which character – as performed by David Rintoul – was your favourite?

If I had the time, yes

I'm sure the bare facts of the true story could be quite hard reading, but Harris has really brought the fascinating story of Dreyfuss and Picquart to life in this intriguing novel. The most unbelievable elements are ctually the facts about how the most senior officers in the French Army along with senior members of the government conspired to hide the truth - as unearthed by Picquart. Thoroughly recommended.

This was a really fantastic listen. It is a novel woven around the actual events of the Dreyfuss affair and combines historical accuracy with vividly imagined emotions and behaviour of the key characters involved. The construction and then unravelling of the military intrigue is gripping as is the personal story of Picard and the consequences of his actions on those around him.

David Rintoul's narration was perfect for the novel and I will certainly choose further audiobooks on the basis of his narration.

This book is great for those who like political thrillers or historical novels with a strong basis in painstaking factual research.

I listened to this while carrying out a particularly dull administrative task and it kept me at my desk far beyond midnight and consequently completed project ahead of target.

A dark episode in history brough vividly to life

Where does An Officer and a Spy rank among all the audiobooks you’ve listened to so far?

What does David Rintoul bring to the story that you wouldn’t experience if you had only read the book?

David Rintouls narration is eloquent and easy to believe you are listening to the real Picquart, albeit without a french accent.

I quickly realised this was a book to savour so rationed myself to a chapter a day to make it last.

Facinating story from a different perspective

Would you consider the audio edition of An Officer and a Spy to be better than the print version?

Many of the names of people and places are of course French. The David Rintoul's pronunciation made it all the more real.

What was one of the most memorable moments of An Officer and a Spy?

There are many memorable moments, but the way in which the duel was read was excellent.

I really felt for Georges Piquant throughout as I found I knew him so well.

An excellently crafted narrative of a shocking historical conspiracy, superbly brought to life by David Rintoul. I was gripped from start to finish.

Truly outstanding. Encapsulates all that is best in historical fiction. Vies with 'This Boy' as my audiobook of 2013.

the most enjoyable way to learn history

What made the experience of listening to An Officer and a Spy the most enjoyable?

The portrayal of the characters, their depth and the fact that the story is true, incredible though it may seem.

Have you listened to any of David Rintoul’s other performances? How does this one compare?

The best thing you could say about this historical fiction novel, is that it spawns so much other research into associated subjects. The history of the 1870 Franco-Prussian War, the history of anti-semitism, Devils Island stories etc.
And, it renews faith in humanity to see how some people resist corruption no matter what and at considerable risk.

Great book, well written and narrated. Harris at his best.
A shocking story that is amazing and based almost totally on actual events. Don't hesitate to get it.

I enjoyed this book immensely. It appeared to be well researched and meticulously written. It was very credible and placed me in the period well. The theme of whistle blowing and the trauma that ensues for the whistleblower was consistent with my understanding of what happens.
The storyline is excellent and at times, I could not stop listening.

All in all, I highly recommend this audiobook.

The Best Book I have ever Listen too

Robert Harris is a fantastic writer and I can't wait to listen to 'The Ghost'. I read his 'Fatherland' years ago but wasn't too impressed, however this book is a must. Spies, military, government, 1895, France, Germany, intrigue it has the lot. This story would be unbelievable if it wasn't based on a true story.
David Rintoul is fantastic narrating this noveltised version of events from the intelligence officer who discovers the truth and then falls foul of the hierarchy cover up.
Damn good story this. Bought the printed copy for my mother to read.

Superb narration, I have seldom heard a book so well read; accents, names and locations are spoken so well it is a shear pleasure to listen to David Rintoul. The book is similarly outstanding, a marvellous read that I savoured with every passing hour. Bravo!

Beautifully narrated, this story is an evocative picture of society and the culture of the French army before the Great War.

This is an excellent book, providing a strong insight into the politics of this time. It would be interesting enough if it were a work of pure fiction, but the historical base and accuracy make this both a thoroughly interesting listen and a story with an important lesson to learn. Highly likely that you'll go and research the facts of this case, if you haven't done so already. The performance is excellent as the narrator has an attractive reading voice and a real knack for accents. Very highly recommended!

Would you listen to An Officer and a Spy again? Why?

Possibly, in many years time. Knowing the story would lessen the experience. .
A larger part of this book’s quality is the story line rather than the characters. I’m not suggesting the characters do not have “character”, they do. But the actual story and relevance in a tense pre-war Europe is remarkable.

This is a dramatization of history “The dreyfus affair”. It’s a spy thriller and a courtroom thriller. The key points of the book are true. In between the author has made a gripping story with the main character having an admirable personality. If not a bit overdone towards the end

Have you listened to any of David Rintoul’s other performances before? How does this one compare?

I have not heard a better narrator than David Rintoul. .
I often wonder if he has to rehearse or if he can do this off the bat.In my opinion this is one of his best performances. Also because there are few female characters and no love scenes. They always sound sickly from any male narrator

Don’t research the history of the The dreyfus affair before listening. .
Surprised the author didn’t lean more on what a flash point Alsace Lorraine was and the paranoia between France and Germany before WW1

The story is well described and one can imagine how it was. Having no military knowledge or much of an interest it managed to keep me interested for 2/3 of the part. I believe I'm not the main target audience for the book as I would prefer a little more romance. However I think it's a great book for people with an interest in history and how France's military/ court work in the late 1800 onwards.

A story you have heard about but never in depth. This case explains so much which happened afterwards. Great fascinating book.

What did you love best about An Officer and a Spy?

I couldn't listen to it

I can't explain it and don't remember all of why I stopped early on. I couldn't get into the style, with so many minute details and moment by moment description, some of it creepy. I suppose there could have been a good book waiting later, but I couldn't stomach it to find out.