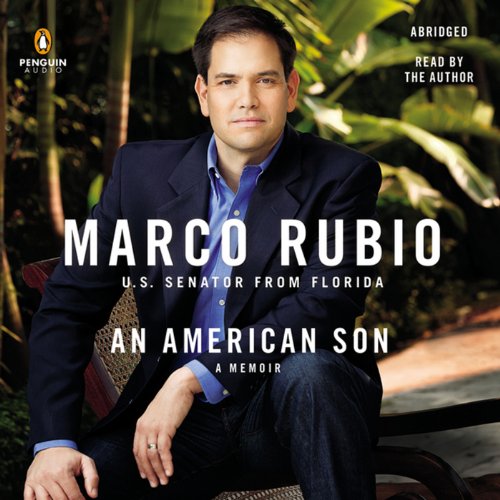 Few politicians have risen to national prominence as quickly as Marco Rubio. At age 41 he's the subject of widespread interest and speculation. But he has never before told the full story

That journey began when his parents first left Cuba in 1956. After Fidel Castro solidified his Communist grip on power, Mario and Oria Rubio could never again return to their homeland. But they embraced their new country and taught their children to appreciate its unique opportunities. Every sacrifice they made over the years, as they worked hard at blue-collar jobs in Miami and Las Vegas, was for their children.

As a boy, Rubio spent countless hours with his grandfather, discussing history and current events. "Papa" loved being Cuban, but he also loved America for being a beacon of liberty to oppressed people around the world. As Rubio puts it, "My grandfather didn't know America was exceptional because he read about it in a book. He lived it and saw it with his own eyes."

Devastated after his grandfather's death, Rubio was getting poor grades and struggled to fit in at his high school, where some classmates mocked him as "too American". But then he buckled down for college and law school, driven by his twin passions for football and politics. He played football at a small college in Missouri, then came back to Florida to attend Santa Fe Community College and the University of Florida. He went on to earn his law degree from the University of Miami and took a job at a law firm, which paid him a handsome salary that allowed his father to retire.

As a young attorney he ran for the West Miami City Commission, a role that led to the Florida House of Representatives. In just six years he rose to Speaker of the House and became a leading advocate for free enterprise, better schools, limited government, and a fairer, simpler tax system. He found that he could connect with people across party lines while still upholding conservative values.

His U.S. Senate campaign started as an extreme long shot against Florida's popular incumbent governor, Charlie Crist. Undaunted by the early poll numbers and the time away from his wife and kids, Rubio traveled the state with his message of empowerment and optimism. He upset Crist in both the primary and a dramatic three-way general election, after Crist quit the GOP to run as an independent.

Now Rubio speaks on the national stage about the challenges we face and the better future that's possible if we return to our founding principles. As he puts it, "Conservatism is not about leaving people behind. Conservatism is about allowing people to catch up."

In that vision, as in his family's story, Rubio proves that the American Dream is still alive for those who pursue it.

What listeners say about An American Son

Good info, not too fluid

Annoying that it wasn't chronological. But he seems like a good dude and this book is a nice explaination for how he became such a tea party phenomenon without being too radical.

Biography did not flow smoothy.

Time was well-spent for the overall message.

I prefer UNABRIDGED and it should follow a proper time line.

What aspect of Marco Rubio’s performance would you have changed?

The Authors performance was good, he is easy to listen to.

What else would you have wanted to know about Marco Rubio’s life?

He should go deeper into his patriotisim.

Would you listen to An American Son again? Why?

No, but I would recommend it to others to read

Next to Marco? There are so many - probably his grandfather and Marco's wife

What does Marco Rubio bring to the story that you wouldn’t experience if you just read the book?

He has a great reading voice - I felt as if he was telling me his story.

If you could sum up An American Son in three words, what would they be?

Marco Rubio. He just proves to me haw anyone can achieve the American dream if they just put their mind too it and accept the things that come your way without complaining and move on to the next step.We all have stumbling blocks along the way but we need to figure out our next step and move on without whining . Very inspirational man.

Have you listened to any of Marco Rubio’s other performances before? How does this one compare?

First one I've listened too. He is very good reader.

There were many. I think his love and respect for his family especially his grandfather.

This book has really made me see Marco Rubio as a perfect example of a person who is living the American dream and has not lost sight of his humble beginnings. Really respect this man.

Would you consider the audio edition of An American Son to be better than the print version?

This is a great title for listening as you drive, or do other tasks. The structure is somewhat convoluted, as it isn't a straight time-line. It was probably easier to follow the storyline and to maintain interest in audio that it would have been in print.

Would you recommend An American Son to your friends? Why or why not?

There could be some interest in this story simply as biographical material on Cuban exile and migration resulting from pressures of the early Castro regime. Its primary appeal would be to those interested in the current political scene.

Which character – as performed by Marco Rubio – was your favorite?

Rubio's father and grandfather were appealing characters because of the obstacles that they doggedly worked to overcome. The development of Rubio's personality and values is of interest as viewed in light of his recent arrival on the national political scene, and as he is being considered as a possible Romeny VP running mate.

The tenacity of Rubio's parents and ancestors in working to secure freedom and a reasonable life station for their children is particularly moving.

The story is seemingly edited to bring some focus to Rubio's stance on immigration issues. It attempts to clarify statements he has made regarding whether his parents actually had to "escape" Castro's Cuba. It seems that they were already in the U.S. when Castro came to power, but that his mother faced some challenges in being allowed to return to the U.S. after a visit with her ailing father in Cuba.

Can't wait to hear the rest

If you could sum up An American Son in three words, what would they be?

What other book might you compare An American Son to and why?

Reagan In His Own Hand...Both are chock full of logic and inspiration.

What does Marco Rubio bring to the story that you wouldn’t experience if you just read the book?

I can hear the earnestness...the words ring true.

I could not afford that luxury, but I can't wait to get back to it.

For the pessimists among us who worry about the future, Marco is a bright shining light that radiates hope.

Good book about Marco .. He tells in detail his story , political and the one of his life and family ... A son of immigrant he became someone .. A powerful message

The chapters of this book were not numbered correctly, so were not read in the proper order.

Sequence of chapters jumbled? Downloaded twice to see if the download was corrupted. A decent story. Execution = poor at best.

While I realize cutting down a book is difficult, I can't help but think there could've been a better way. It went and forth too much in terms of timeline that it was distracting. But still, rubio's story is incredible.