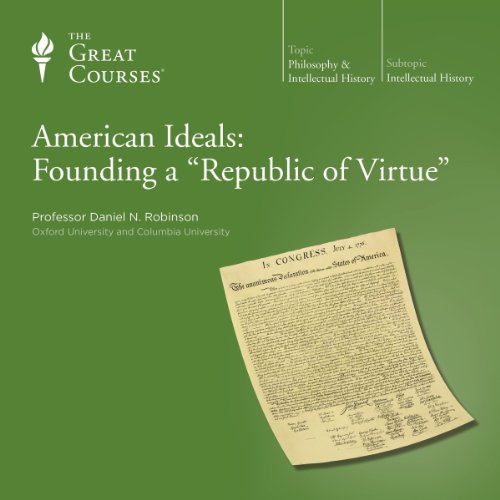 What is the significance of the phrase "the pursuit of happiness" in the Declaration of Independence? Why does it read "We the people" in the preamble to the Constitution? What were the philosophies and social forces that made this country unique - that enabled it to become the first successfully self-governing republic?

Answer these questions and more with this insightful 12-lecture course, which explores the principles that guided the founding of the United States, the conditions that led to the break with Great Britain, and the creation of such founding documents as the Declaration of Independence and the Constitution. You'll deepen your understanding of fundamental ideas that inspired American independence and that continue to have a profound influence on American thought. You'll also receive insight into what historians call "the long conversation" in American society - questions that have been the focus of debate and controversy since the nation was born.

As the world's oldest democracy, the United States stands as the "test case" for those who regard self-government as inherently unstable, inherently self-destructive. Examining the founding documents, such as the Articles of Confederation, the Declaration of Independence, and the U.S. Constitution, Professor Robinson considers the principles under which the United States evolved.

What listeners say about American Ideals: Founding a 'Republic of Virtue'

I'm sure the Professor has his fans and I can tell he is extremely brilliant and has in-depth knowledge in alot of areas but when I finished this course I found myself asking "What exactly was this course about?" What is frustrating is there were times (especially lectures 4-5, and 8-9) in which he provided some really good insight and I began learning but he would just lapse into his bizarre style of....

1- Not providing any kind of unifying theme for the course; Was this a history of self-government? Was it supposed to be about the origins of American ideologies? Was it a history of early America? The origins of our founding documents? None seemed to fit and he never explained the course's intent or goal! The lectures seemed to have little sequential cohesiveness

2- The professor could not stay on topic! He would digress into weird side discussions and at times have to catch himself and get back to the topic at hand

3- There seemed to be no preparation here; Yes, the professor has amazing breadth of knowledge but the lectures felt like haphazard free-styling sessions in which whatever came to his mind he would say; The conversation was scattered all over the place

4- This was an advanced course and not for beginners wishing to learn about the facts of how the United States of America was formed (what I thought I was getting); He assumes you have in-depth knowledge of everything from the Classical world to French essayists

5- What in the world was the last lecture? Discussing two authors' takes on comparing the American and French Revolutions seemed out of place here...again is this course about ideologies? American history? I wish the course description from the TGC would've been clearer but perhaps even they do not know!

So much more than anticipated

A wonderful ride thru the birth of the USA.
What lies behind the constitution and how did it come about.
A convincing and engaging narration. Will look for more audibles by Prof. Daniel N. Robinson.
Thoroughly enjoyed it.

As always just beautiful! Delivery is flawless. Mix of philosophy and some comparisons with present times was really informative.

I think this is the second iteration of this lecture. Prof. Robinson is an old school (compliment!) erudite intellectual who knows much more than he can possibly convey in a lecture so he gives the information with just enough background to support his thesis. He also does not let politics or pc intrude into the delivery.

Mr. Robinson is a pleasure to listen to, his presentation and asides make one feel he is in the lecture hall.

Fascinating presentation that ended too quickly.

The lectures flew by, even after listening to large parts of them more than once to better understand it all.

This one was not nearly as coherent as Great Ideas in Philosophy. I did learn a lot but had more trouble following the timeline.

This course was just a meandering series of quotes from the forefathers followed by vacuous reverence. It felt like the professor just threw something together at the last minute.

I’ve listened to dozens of the great courses and of the 12 lecture selections this has to be my favorite.

Loved the material, the presentation, understanding of the challenges the framers of the constitution had, yet they made it work.