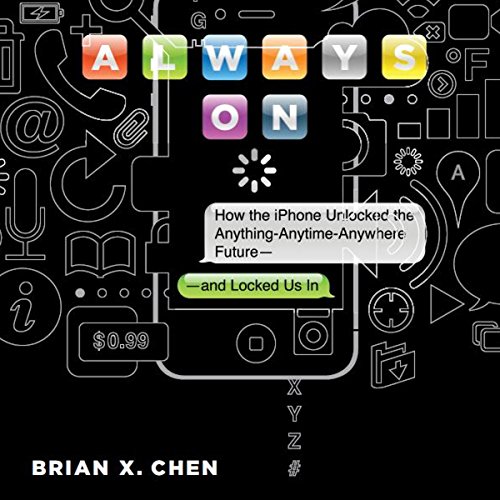 Even Steve Jobs didn't know what he had on his hands when he announced the original iPhone as a combination of a mere "three revolutionary products": an iPod, a cell phone, and a keyboard-less handheld computer. Once Apple introduced the App Store and opened it up to outside developers, however, the iPhone became capable of serving a rapidly growing number of functions - now more than 350,000 and counting.

But the iPhone has implications far beyond the phone or gadget market. In fact, it's opening the way to what Brian X. Chen calls the "always-on" future, where we are all constantly connected to a global Internet via flexible, incredibly capable gadgets that allow us to do anything, anytime, from anywhere. This has far-reaching implications - both positive and negative - throughout all areas of our lives, opening the door for incredible personal and societal advances while potentially sacrificing both privacy and creative freedom in the process.

Always On is the first book to look at the surprising and expansive significance of Apple's incredibly powerful vertical business model, and the future it portends.

"A swift, engaging analysis of how the iPhone is changing the way technology is integrating contemporary society." (Kirkus Reviews)

What listeners say about Always On

Like so many books these days, what would have made an excellent magazine article has been fleshed-out into a full 400 odd page book; after the first few chapters, which are quite interesting, we get into what is clearly padding and it becomes boring stuff. Also, the narrator is the chap who wrote the book and he should stick to producing the words as unfortunately his voice is monotonous and nerdy.

"Always On" Is Surprisingly Good

Always On is one of those books that I flirted with buying (downloading?) for a few months. Up until last week I could never convince myself to pull the trigger (add to the cart?).

The book seemed to have a few things going against it:

Turns out, I should not have waited to read Always On - and neither should you.

Give yourself 5 hours and 42 minutes to read Always On (the length of the audiobook … you will read it even faster if you use your eyeballs and not your ears), and you will learn some new things. Brian X. Chen is not an Apple fanboy or an unthinking iPhone evangelist. Rather, Chen (who now writes for the NYT Bits blog) is a thoughtful critic of the costs, as well as the benefits, of our always connected and hyper-networked society. Chen's thesis is that the combination of 3 technologies - the smart phone, ubiquitous bandwidth, and Web 2.0 social tools - have fundamentally changed how we structure our professional and personal lives. Mobile information abundance, combined with always available digital communication, equates to the need for new structures around our work, education, and social lives.

What Chen is advocating is that we take seriously this shift from information/communication scarcity to information/communication abundance. He asks, what would higher education look like if designed around the capabilities the iPhone and mobile apps, and he wonders how the institutions that do not evolve will remain relevant. Chen also recognizes the costs of living in a world where e-mail, text messaging, Twitter, Facebook and the entire Web are always with us.

Chen does not shy away from detailing the dangers of our mobile web addiction. He worries that we will misuse the technology of smart phones, ubiquitous networks, and social tools to avoid rather than develop authentic relationships. And rather than offer any simple fix-alls or advice, Chen takes the route of detailing how the iPhone and the web has provided both benefits and costs in his own relationships.

The other strength of Always On is Chen's analysis of the pros and cons of Apple's closed iPhone ecosystem. Most writing about Apple's walled garden tends to be either strongly for or strongly against vertical integration. Chen takes a middle path, pointing out the benefits for both companies (profits) and consumers (quality/integrated product experiences) that vertically integrated platforms can create.

The iPhone and a Mac may (I'd argue do) provide a better use experience than non-closed platforms, but this comes with a set of very high costs around control. The birth of the computer industry owes much of its early growth from the hacker ethos, from young technologists being able to re-program their machines and re-write their software. None of this is possible on an iPhone or iPad. Apple approves each app, and each app must conform to all of Apple's programming policies and guidelines. In Always On, Chen gives this tension between vertical vs. horizontal / open vs. closed platforms considerable attention, complementing his opinions with thorough (but concisely reported) research and analysis.

Any complaints about Always On? I think that the book could have been even more condensed into the length of Kindle Single, but maybe the iPhone, apps, and the web are contributing to my shortened attention span. This complain should not deter you from reading Always On, as I'd like to chat with you about your reactions to the book.

It's almost like he took a couple of blogs and expanded them to book length form--no great new insights here. There is a good chapter about Apple vs. Google vs. the wireless carriers that is interesting. The author is not a great narrator.

A disturbing look into the future

There are many great things we have enjoyed as a result of technological advantages, but I am not sure I am ready to completely meld with technology itself. I love my Ipod and my two laptops,but I would still much rather interact with a real human being. There is something disturbing about our addiction to media. Computers are reshaping our thought processes. As Brian alludes to, we are relying too heavily on media to think on our behalf. What happens when the computers can read our minds? Will we cease to be human or become some sort of cyborg like beings? It seems Brian is able to keep tech in perspective and perceives its value without being dependent on it. This book has made me aware of my addictive habits and how they are isolating me instead of connecting me with the people I love.

Very Good Book, but the Audio version not so Good

The book is really good, cause give us an excellent overview about the smartphones impact over our lives. However, the narrator (the author himself) is not so good. For foreigners like me, it affects the listening. I suggest you to hire a professional one.

Whats to say about how we are tethered to our electronic devices. There is nothing new that this book adds....

I did not enjoy this material. The author was ranting. I wanted information I could use. The material was true but did not help me.