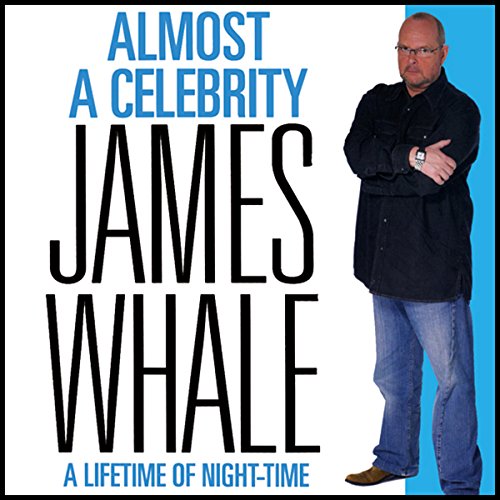 Forget the wannabes. Discount the twenty-something reality-TV stars. Here, for a change, is the story of someone who's actually lived a life... and it makes for one hell of a listen.

Almost a Celebrity is the no-holds-barred autobiography of radio megastar James Whale, a man who, for over 30 years, has never been afraid to say the unsayable.

Written (and now spoken) in his typically deadpan style, Almost a Celebrity charts James' rise to the top – with plenty of trademark rants along the way – from his Surrey childhood, where he avoided school by hanging out in Soho strip joints, through his humble beginnings in local radio, via the eponymous TV which made his name, to his current status as late-night king of the airwaves. Whether discussing his encounters with celebrities or his involvement in tabloid scandals, the book is crammed with extraordinarily frank revelations. There are also unexpected twists: James' former career as an international spy and a dark family saga that brought him into contact with a hit man.

Yet James is no stranger to controversy. His outspoken opinions have led to numerous TV and radio watchdog enquiries, death threats, and even his arrest. In 2000, he confronted his toughest opponent so far when he was diagnosed with cancer and given only months to live.

An inspiration to millions, James Whale is a genuine man of the people. And – as usual – there's no stopping him from telling his story in his own engaging, inimitable way. Although slightly abridged, this audio edition contains brand new asides and off-the-cuff additions from James in the studio – nothing less than you'd expect from the radio master!

"Whale's been the subject of many a Watchdog enquiry, death threats, and at least one arrest... an entertaining read." ( Zoo magazine)

What listeners say about Almost a Celebrity

What made the experience of listening to Almost a Celebrity the most enjoyable?

James does the audio himself.

What other book might you compare Almost a Celebrity to, and why?

No other book compares.

Which character – as performed by James Whale – was your favourite?

James Whale at his best.

As a fan of the Whale you could say I am going to rate this high anyway, but it is just a really interesting book and very well read. When you have had a life like him and met so many people, its going to always be good. The best autobiography I have so far.