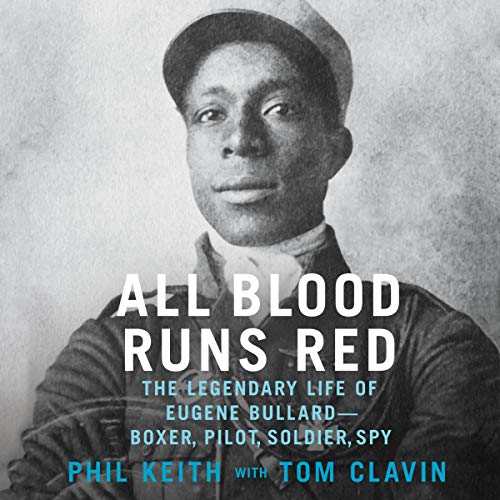 The incredible story of the first African-American military pilot, who went on to become a Paris nightclub impresario, a spy in the French Resistance and an American civil rights pioneer

Eugene Bullard lived one of the most fascinating lives of the 20th century. The son of a former slave and an indigenous Creek woman, Bullard fled home at the age of 11 to escape the racial hostility of his Georgia community. When his journey led him to Europe, he garnered worldwide fame as a boxer, and later as the first African-American fighter pilot in history.

After the war, Bullard returned to Paris a celebrated hero. But little did he know that the dramatic, globe-spanning arc of his life had just begun.

All Blood Runs Red is the inspiring untold story of an American hero, a thought-provoking chronicle of the 20th century, and a portrait of a man who came from nothing and by his own courage, determination, gumption, intelligence, and luck forged a legendary life.

What listeners say about All Blood Runs Red

An eye opener and an inspiration

Full respect to him for all the hardship that he faced and still kept going. Would recommend this to those who enjoy learning about the lives of others.

I enjoyed this book, very informative - but racism described is sad as it always is when I read about or see it or hear it. The historical work on this book is interesting, verifications on anyone’s life is difficult because their memories are just that memories which many times are flawed. Autobiographical material is always somewhat flawed depending on the person. Still I thought this work is wonderful and fits our times - I like the slogan All Blood Run Red - it’s fitting - it feels right to me.

This book fills in the details of Bullard’s life, well beyond his exploits as a WW1 aviator. A must read / listen for anyone who is interested in early aviation. But also an excellent tale of life in America prior to the Civil Rights era. Enjoy.

The life of Eugene Bullard writes itself. The fact that his life story hasn't been turned into a movie (other than a fictionalized representation in the movie Flyboys) only serves to demonstrate just how much Hollywood lacks imagination. Destitute stow-away on a German Freighter. Professional prize fighter. Highly decorated and severely wounded infantry soldier during World War I who became the first black fighter pilot. Successful nightclub owner who rubbed elbows with the likes of the future king of England, Duke Ellington and Louis Armstrong and who Ernest Hemingway wrote into one of his novels. Successful jazz drummer who recorded and toured with Louis Armstrong. Member of a French spy network who almost died in a gunfight in his own nightclub while tangling with gangsters. Unofficial "soldier" in World War II and wounded fighting the Nazis. Refugee who barely escapes occupied France with his life. A larger than life character who also had many faults (drinker, hair-trigger temper). Devoted father who raised his two daughters pretty much as a single parent. The story is almost too incredible to believe.

Now, that being said, this audiobook has its faults. The authors' attempts at dialogue are choppy and probably should have been avoided.

James Shippy has a nice voice but also has a Shatner-esque cadence that at times drove me mad. Take this little gem from chapter 24, "...even met with the legendary commissioner of baseball, Kennisaw Mountain Landis.......to push for inclusion......to no immediate effect." Furthermore, he is often inconsistent with his French.

If you haven't read this book, I highly recommend it.

While I enjoyed all the information, it was at least 13 sentences too many about other people ie Paul Robeson.

This is a wonderful book with an inspiring biography about a true American hero. I had never heard anything of him before, and was completely captivated by the ingenuity, grit, and sense of duty of Eugene Bullard. Shippy did a great job with the narration. This is a great read.

One of the best biographies I've ever listened to

Very interesting! Once started could not stop!

Loved it! Amazing story and life about a man determined to become the best version of himself! Inspiring story! This should be a required reading for every African American preteen and teen.

Wow this man’s life story is absolutely incredible. He knew everyone who was anyone. I really would love to see this made into a series. It’s sad that I’ve never heard of him or his history before. He deserves his place in history. The only thing I’m knocking off one star is the reader does not have a very good French pronunciation.

This book was a joy to listen to

The book opened my eyes to how much hard work pays off and never giving up on your dream no matter how challenging it may be.

This is the story of an amazing American who ran away from home as a child, went to France and did all the things that the publisher's teaser said he did-on a second grade education. The book is well written and an easy listen. One theme in Bullard's life is flexibility and adaptability. Anther is the ugly face of racism. Good book!