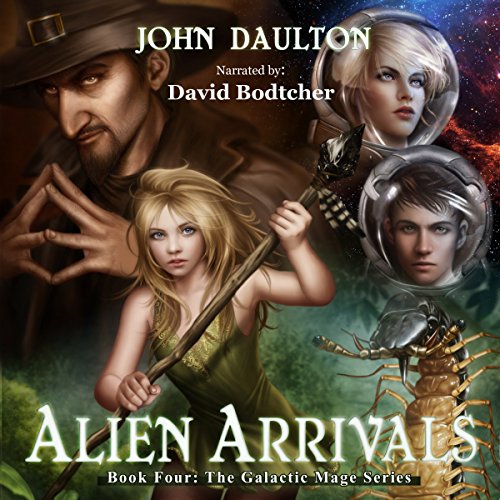 The populations on several worlds have discovered themselves to be but part of a galaxy filled with other sentients. Book 4 of the Galactic Mage series begins a new phase of existence for the people of those worlds, and it follows the lives of Altin and Orli, Roberto, Queen Karroll, Blue Fire, Shadesbreath, and, of course, Pernie as they begin to discover what roles they have in the redefined universe.

Other familiar characters also appear, including the return of Black Sander and the ever-malignant marchioness. Their motives and machinations become increasingly clear, and their ambition, patience, and cunning will be put in pursuit of greater power and influence. It's a new world in the wide, wide galaxy, and the opportunities are endless...for everyone.

Alien Arrivals is the fourth in the series.

What listeners say about Alien Arrivals

come on another cliffhanger

I was hoping for some happy ending but I got a to be continued. now I have to wait for the next book when it comes out in audio, and I really don't want to read what happens next.
anyway good story, good narrator and poor Pernie I do hope for a happy ending for her.

great book from one of my favorite series.

If your looking for adventure and action the galactic mage saga is definitely for you.