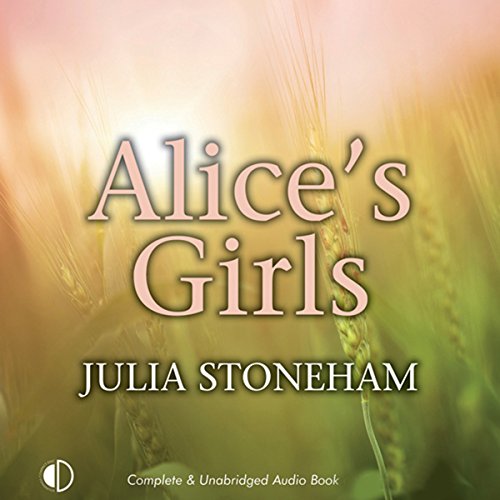 In the last months of World War II, 10 Land Girls are serving at Post Stone Farm under the watchful eye of their warden, Alice Todd. The local Land Army representative had at first been reluctant to give Alice the warden’s job, and Roger Bayliss, the farm’s owner, seemed not to have any confidence in her at all. But she proved herself more than capable of the job and she has won the girls’ admiration. Recently divorced and with a 10 year-old son to bring up, Alice fears for the future.

When peace is finally declared and all of Alice’s girls make plans for their lives after the Land Army, she, too, has a decision to make.

The very best of the Trilogy tying up all the ends

Please read the first two, Muddy Boots and Silk Stockings and Girl at the Garden Gate before listening to this Alice's Girls. Julia Stoneham makes all her characters come alive and I can imagine them all still living somewhere happily leading their lives. Patience Tomlinson is the best narrator, she always pauses between paragraphs and chapters making a good clear definition. Is this the best of the Trilogy? Difficult to say.I enjoyed the first two so much and have re listened again and again. Only by chance found the third book! I have spent the past 3 days listening and loving every moment. The characters lives well defined and so interesting. Land girls and their work well explained. Some sadness, some happiness, some puzzles. A wonderful book to listen to hope you enjoy it as much as I have.

Excellent stories- have read all 4 now :0)

Definitely recommend, even purchased the four books for a Mother's Day gift for my mum to read.

What was one of the most memorable moments of Alice's Girls?

All the girls stories are memorable, Evie's story is my fav I think.

The story of mayble and Evie and the outcomes, really nice.

Made me laugh and cry, can't wait for a 5th book hopefully from Julia stoneham.

I'm not very good with words as I'm dyslexic, so love the audio books especially the four books in this Julia stoneham series.

Since I have come across the audible books I have listenend too 11 books in 5 weeks. When I last picked up a book to read it took me about 3-4 weeks to read one book because of my dyslexia.