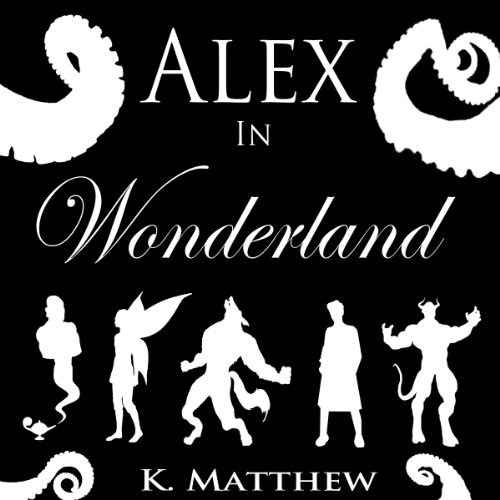 By: K. Matthew
Narrated by: Hunter Milbrook
Try for £0.00

Six tales of titillating monster mayhem wrapped into one. Follow international thief Alex Finch as the White Rabbit teaches him a lesson he won't soon forget. The moral of the story: Don't steal unless you want to put your ass on the line.

Alex and the Genie (Book 1): Alex Finch was a world-renowned art thief with an impressive resume. He had stolen some of the most highly regarded paintings on the face of the planet, from The Mona Lisa, in the Louvre, to The Starry Night, in the Museum of Modern Art. Nothing was too big of a challenge for Alex.

Alex and the Tentacle Monster (Book 2): Alex awoke to the cool night's breeze, knowing that he had to press onward in his journey to meet with the Demon of Hearts. Soon, Alex stumbles upon a garden of flowers. While seemingly innocent, there's a predator lurking within who is hungry for the pleasures of his body.

Alex and the Fairy (Book 3): Alex's luck seems to change when he wakes up in the safety of a fairy city. While he's tempted to stick around, his quest for the white rabbit cannot be delayed. The only way out of the fairy village, however, is to seduce a very sexy fairy prince. This is one notch on Alex's bedpost that he's actually going to enjoy making as he allows the young virgin to pretend he has control.

Alex and the Werewolf (Book 4): Darkwood Forest is not known for being a friendly place. While Alex knows that werewolves are out there, avoiding them is a completely different story. When a pack gangs up on him, there's nothing that Alex can do but succumb to their desires or be killed for his reluctance.

Alex and the Vampire (Book 5): Despite all of his efforts, Alex cannot escape the grasp of the vampires. Their leader seems disinterested in Alex's quest and far more interested in his body.

Alex and the Demon (Book 6): The exciting conclusion to the Alex in Wonderland series. Alex is finally presented to the Maze of Blood Roses, which is much more sinister than he could have ever imagined. Will the Demon of Hearts grant Alex permission to return to his world? Or will he end up stuck in Wonderland, forever a sexual slave to the monsters' desires?

What listeners say about Alex in Wonderland

Unquestionably because of the phenomenal Narration... the story is only so so, but the narration by Hunter Milbrook made it just everything...

What was one of the most memorable moments of Alex in Wonderland?

The scene where Alex experiences his first penetrative experience. Hunter made this scene...

What does Hunter Milbrook bring to the story that you wouldn’t experience if you just read the book?

He brought everything to this audiobook. I will admit I'm not the biggest fan of the supernatural genre, because it can be really cheese if not done well. The story is above average, but Hunter's narration really pushed everything over the top.

Yes! But I've had to listen to it in sections.

If you could sum up Alex in Wonderland in three words, what would they be?

What other book might you compare Alex in Wonderland to and why?

None that I'm aware of.

Have you listened to any of Hunter Milbrook’s other performances before? How does this one compare?

This is the first. Mr Milbrook is one of the better narrators I've listened to. He deserves to read more popular books. He'd be great for Dreamspinner Press or other M/M erotica. He is head and shoulders above many narrators chosen for some of Audible' s offerings.

The author has a good imagination. I wasn't expecting much but I liked it more than I thought I would.