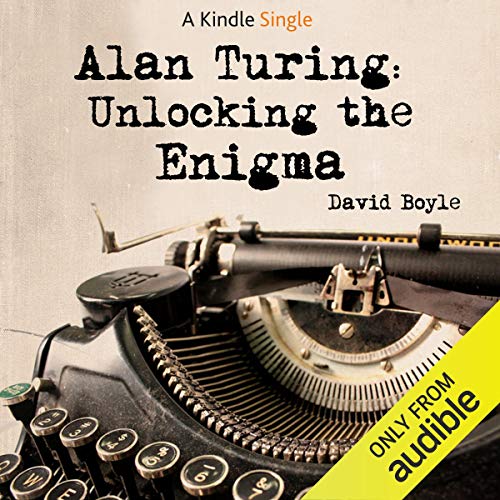 Alan Mathison Turing. Mathematician, philosopher, codebreaker, a founder of computer science, and the father of Artificial Intelligence, Turing was one of the most original thinkers of the last century - and the man whose work helped create the computer-driven world we now inhabit.

But he was also an enigmatic figure, deeply reticent yet also strikingly naive. Turing's openness about his homosexuality at a time when it was an imprisonable offense ultimately led to his untimely death at the age of only 41.

In Alan Turing: Unlocking the Enigma, David Boyle reveals the mysteries behind the man and his remarkable career. Aged just 22, Turing was elected a fellow at King's College, Cambridge on the strength of a dissertation in which he proved the central limit theorem. By the age of 33, he had been awarded the OBE by King George VI for his wartime services: Turing was instrumental in cracking the Nazi Enigma machines at the top secret code breaking establishment at Bletchley Park during the Second World War.

But his achievements were to be tragically overshadowed by the paranoia of the post-War years. Hounded for his supposedly subversive views and for his sexuality, Turing was prosecuted in 1952, and forced to accept the humiliation of hormone treatment to avoid a prison sentence. Just two years later, at the age of 41 he was dead. The verdict: cyanide poisoning.

Was Turing's death accidental as his mother always claimed? Or did persistent persecution drive him to take him own life?

Alan Turing: Unlocking the Enigma seeks to find the man behind the science, illuminating the life of a person who is still a shadowy presence behind his brilliant achievements.

"The tone of the book may be gloomy but there is plenty of entertainment value..." (Anne Ashworth, The Times
"He tells these stories, on the whole persuasively and with some startling asides." ( New Statesman)

"A book that is engagingly sensitive to the sentiments of what is sometimes called 'middle England'" (Dominic Lawson, Sunday Times)

What listeners say about Alan Turing

Short but succinct and intriguing

Yes, it's a fascinating taster about a complex individual and it raises philosophical questions as well as looking at code breaking and AI. It's made me want to know more about the man and his work.

It's a biopic about Turing.

What does Barnaby Edwards bring to the story that you wouldn’t experience if you had only read the book?

Relaxed and easy reading style made for enjoyable listening.

Yes, I did. At only 2 hours, it rattled along and packed in a lot.

read while exercising. enjoyed. would have liked a little more detail on his creative thoughts and on his collaboration on both sides of Atlantic

I’d been hearing Turing’s name a lot since the release of the movie, The Imitation Game, but I really didn’t know much about him. That changed after reading this book. Though it is not very long, it is a wonderfully in depth look at a fascinating man. Very well-written and presented.
I listened to the audio version and the narrator, Barnaby Edwards, did such a fantastic job. He made it even more interesting. If you are a history buff, particularly regarding the history and early development of computers, I think you will enjoy this book.

Both the machine and the man

The only thing that I knew about Alan Turing before this book was a few things about his role in cracking the Enigma Code in WW2. This limited biography explores his role in advancing the computer sciences and development of A I. There is also detailing of his being persecuted by his own government because of his homosexuality.
Barnaby Edwards is very good as narrator.

I appreciate this short and informative education on a great person who helped make our world a better place.

The information was interesting but there could have been more about the theories and applications of his work.

He helped to finish World War 2, and the co!mputer of today, A great man

What made the experience of listening to Alan Turing the most enjoyable?

What other book might you compare Alan Turing to and why?

I can't think of any right now.

A wonderful book if you have any interests in technology and/or gay rights.

Just saw the movie and enjoyed it very much.
The movie, while very appealing as an engrossing story took considerable liberty with its portrayal of Turing the man, choosing to emphasize the persecution of Turing the homosexual.
While as a physician I am uncomfortable with the idea of chemical castration as a criminal punishment, I certainly have many patients who have had "chemical castration" as a part of their treatment for prostate cancer. No such symptoms as portrayed by Benedict Cumberbatch in "The Immitation Game" occur in my patients. The symptoms of Turing the actor are consistent with those of a man under extreme duress and in the midst of a nervous breakdown. Perhaps in this case a distinction without a difference. 😱