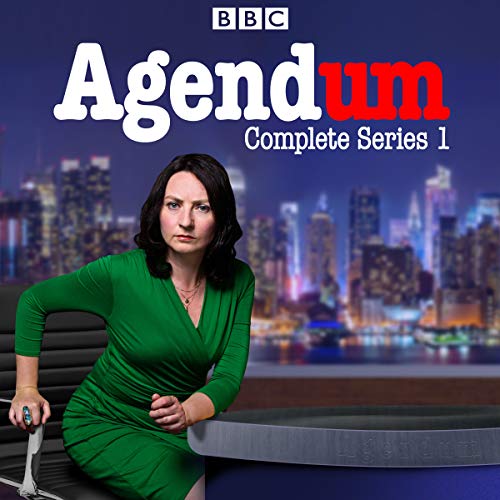 A current affairs parody and stupidly feasible visit to the 24-hour Hall of Opinion Mirrors. Because there are two stories to every story.

Created by Jason Hazeley and Joel Morris, the masterminds behind Philomena Cunk and the adult spoof Ladybird books, the show was piloted in September 2017 and sent off to Radio 4. Twenty-eight minutes later, it was commissioned for its first series, which started going out in August 2018....

The show comes from Pozzitive, proud producers of Cabin Pressure, Thanks a Lot, Milton Jones!, Jeremy Hardy Speaks to the Nation, The Brig Society, The Castle, Armando Iannucci’s Charm Offensive, Shush! and Kevin Eldon Will See You Now....

In episode 2, 'Crisis', Kath Hughes, Simon Kane (John Finnemore’s Souvenir Programme) and Tayla Kovacevic-Ebong join the Agendum team as a cotton-based crisis, a row about dimensionality and the ethics of the whoopee cushion are analysed with forensic skill by a team of paid voices, chaired by chairperson in chief Alexandra Palisades.

In the third episode, 'Shock', a deadly pandemic, an inappropriate economic yardstick and a very special anniversary are thrown about by some talking heads who probably came in a taxi, corralled by presenterer Alexandra Palisades.

And in the final episode, 'Threat', the very young, the very old and Stevenage all come under the microscope of talking, collimated by Alexandra Palisades. Also featuring Peter Serafinowicz (Shaun of the Dead) as a guest Paul McCartney.

What listeners say about Agendum: Series 1

Can't say I'd recommend this, it's mildly funny at best, it is a few silly stories filled out with increasingly ridiculous names. It was a waste of a credit. I won't be buying the next series.

The show plays the same game as The Day Today or, especially, Listen Against (which I think had some of the same creative team) with lots of clever silly names, eccentric interviewees and playing with the conventions and phrases of ‘serious’ news programmes.

It feels a little slighter or more one-note in format than those shows. Listen Against had a bit more variety in the ways it played with news and reportage tropes.

But in fairness if I had heard this show first I would have loved it unreservedly.

Carrie Quinlan is a brilliant enough comic voice to play the straightman perfectly and the rest of the cast are consistently great.

The final episode had the best laughs for me so I’m looking forward to a second series given that hint of the writing team and cast really beginning to hit their stride. But the whole series is a really solid start.