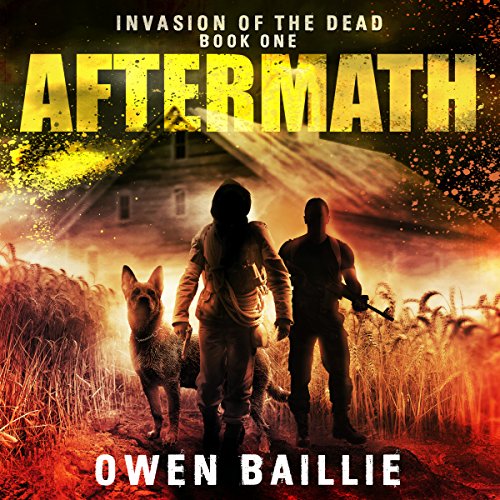 By: Owen Lucas Baillie
Narrated by: Tim Budas
Try for £0.00

Australia...a huge, sprawling land filled with danger...but nothing as dangerous as this... Deep beneath defense headquarters in the Australian Capital Territory, the last ranking Army chief considers the collapse of his country, and the contingency plan to win it back. One hundred and fifty miles away, five friends returning from a month-long camping trip slowly discover that the world has turned horribly wrong, that a virus has ravaged the entire east coast of Australia.

The dead now walk the land, seeking flesh and blood. Armed with dwindling ammunition, the friends must overcome their differences, utilize their individual skills, and face horrors they never imagined...but not all zombies are the same... What will they find if they can all reach their hometown? Will their families or friends have survived? What twists and turns will the group encounter, and what life-threatening decisions will they face? Their personalities and agendas will conflict, as each fights for their place in this new world, a world unlike anything they could have imagined...

What listeners say about Aftermath

Not enough thought put into this I felt.

What would have made Aftermath better?

There are quite a few things that would have made this better.

1. Better characters. I didn't buy into them at all. The men were more emotional than the women, and that is not like most aussie men I've met. The characters were shallow and could use expanding on so they are less flat. The woman that is supposed to be a doctor is not vaguely likely to be one. Heck when she doesn't think to sort antibiotics for someone that just got a seriously leg wound I lost total faith, though I had little before it.

2. Fewer clichés. Things like people leaving weapons lying around and then going off to search places, only to be attacked of course by a zombie. Tripping over rocks or other items to twist an ankle, which is pretty tough to do to the point you can't walk. Too often that characters come out with cliché lines like, "Lets do this!" etc. on repeated occasions.

3. Less unbelievable situations. Who would go out in pitch dark to dig a grave in a zombie outbreak? Only someone looking to die. Who would think a small fence that has a current weak enough that they can touch it will stop zombies that you've blown off limbs and not bothered them? No-one except the characters in this book apparently. And these are just a couple out of a long list. Don't write dumb situations, think of smarter ways to put people in danger rather than situations no-one with a brain would put themselves in.

4. Addition to 3 this one really. The characters know about zombies from movies and books, and they know some things that attract the zombies attention by word of mouth from other survivors. However, despite this they do things that would have me leave them as a group begging to die. They fire guns when ever they feel like it. They shout and yell a lot. The girls (one in particular) scream loudly at shadows and no-one mentions it to her. All of these things are on the top of a list of things you don't want to do if you want to live. First rule in enemy territory is noise discipline, and everywhere is that if the country is overrun with the dead. Even those with no military training should no that.

5. I didn't like the multiple versions of zombies. Personal thing though this is, I'm not sure it needed to be done. The wheel already works, no need to reinvent it. Fresh plot, new twists and good characters are what is most needed. And I also don't really like zombies with super-human abilities. Sure, zombies themselves are not realistic, but I just find it hard to buy into zombies that can suddenly smell and hear better than dogs. Or track a dead body miles away even though how would it smell much different than the dead zombies? Made no sense to me this.

Would you be willing to try another book from Owen Lucas Baillie? Why or why not?

Despite my above negatives I might well do. There is some good points to the book, and I thin kit is his first book. So he is likely to get better at his craft each time, or I would hope so. Certainly if it is a follow up to this he will know the characters more and is likely to fill them out more, and hopefully will think about what situations he puts them in more.

Which character – as performed by Tim Budas – was your favourite?

From the main group I guess Dillon was my favourite. Other than that I quite liked the voicing of the Steve character near the end of the book.

It's a book, and normally the inspire many reactions. In this case I had anger over the dumb stuff. A little sadness on some parts of the book that were sad and reasonable written. And finally slight disappointment that it wasn't a little better.

What disappointed you about Aftermath?

The style of writing which was very much, 'she said', 'he said'. The Australian male characters seemed more like teenage girls. Too much of will you be my boyfriend/girlfriend? Made me think the author was a teenager (he or she might be and I would encourage them to keep going). I like to think I am just not the market the author was after! But hey! It is a zombie story placed in Australia!

Why, if the story is based in Australia why does the narrator use miles instead of kilometres?

What was most disappointing about Owen Lucas Baillie’s story?

The style of writing. The character development. The ending

Would you be willing to try another one of Tim Budas’s performances?

If you could play editor, what scene or scenes would you have cut from Aftermath?

Anything to do with the tangled love interest of the group

Anyone know any good end of the world stories with an aussie perspective?

If I cared about any of the characters. I just didnt, they kept making the same mistakes over and over.

Has Aftermath turned you off from other books in this genre?

No, I know there are good ones. I just have to find them

His performance wasn't awful, but the source material was so bad it was hard to like anything about the book.

What character would you cut from Aftermath?

Unfortunately most of the women, and that's the whole problem! They we're all such weak characters, needing the men to come save them. One of them was a flipping DOCTOR!!! She should have taken control of the situation and been a huge asset to the team. But no, the writer demeaned her character and gave her PTSD for some unknown reason. Probably to make the men feel more superior.

Don't waste your money or credit and pick up WWZ, The Remaining, or the Rot & Ruin series.

i have not heard anything worse than this. not worth my time or money. seriously

Loved the story...and the cattle dog is awsome

Would you listen to Aftermath again? Why?

I loved the story and especially that there is a dog character in the story. So cool how they went away and the world changed. I can not wait on the next book in this series.

What was one of the most memorable moments of Aftermath?

When they first saw the headline and couldn't believe it.

What does Tim Budas bring to the story that you wouldn’t experience if you just read the book?

The book happens in Australia so the Aussie accent is cool.

I am not very good at tag lines.

Please hurry with the next book.