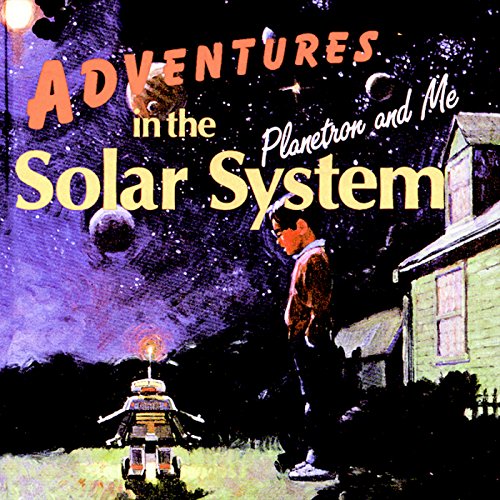 Adventures in the Solar System

Adventures in the Solar System

Will's mom and dad promise him a surprise for getting good grades in school. When his dad brings home a toy transformer robot named Planetron, Will is pleased, but not very excited. Until he discovers Planetron really transforms, from a toy into a huge, faster-than-light spaceship. And when Planetron asks Will if he wants to travel to the sun and the planets, the real adventure begins. Follow Will and Planetron as they escape dust storms on Mars, dodge hurtling asteroids, dive into Jupiter's great red spot, and ride a comet back to Earth.

This is an adventure at the speed of light, filled with exciting sounds, great music, and solid science.

What listeners say about Adventures in the Solar System

My baby brother received this book and cassette tape in the 80s and we all enjoyed listening to it. The story is still relevant (even if Pluto isn't a planet anymore). I got the book and now share this with my own children. it is a favorite!!!!

Cool in a retro futuristic way--loved!

Would you listen to Adventures in the Solar System again? Why?

I plan on listening again MANY times. Useful information about the planets, super cool sound effects, neat narration. This is an undiscovered gem!

I liked the child narrator the best. It's unusual, I think, for children to narrate books but I think it's very effective.

Did Geoffrey T. Williams do a good job differentiating all the characters? How?

All the characters are very different, so yes. There is child named WIll. He jumps into a robot called Planetron, which is also a spaceship. That is an older man's voice. There is a spunky female robot who is the data system for the ship. There are Will's parents, briefly. The robot/data system's voices have some sort of sound effect over them to make them sound more robo

A tour of the planets

Just that this is awesome. Held the attention of both the 6 year old, but also the 3 year old. Even if the smaller children can't concentrate on the narration about the methane concentration on Jupiter, they will like the cool sound effects, etc.

There is a small sort of bell sound that is somewhat distracting at times, but did not bother me; I think it is probably a signal to turn a page on a physical book. In any event, it did not bother us.

Great special effects, good storyline, and I learned a lot about our Solar System, without being bored. 2 thumbs UP!