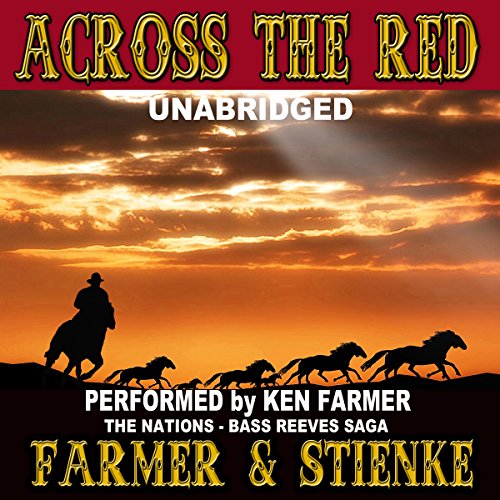 Between the Indian Nations and Texas lies an area on the south side of the Red River that was once the winter camp for the likes of the notorious guerrillas William Clarke Quantrill, Bloody Bill Anderson and later, the James Gang - known as Delaware Bend.

The same northeast portion of Cooke County, Texas, in 1896 was the center of a massive rustling operation by the Red River Gang.

Texas Ranger Bodie Hickman enlists the aid of Deputy United States Marshals Bass Reeves and Jack McGann to go undercover to end this scourge once and for all.

But, the Red River Gang slaughters a 16-man patrol of US Army soldiers to acquire a new weapon - a deadly Gatling Gun.

Will it be enough when they have to face the awesome firepower of a 10-barrel Gatling Gun? Who's the mysterious person behind the massive rustling operation?

Find out in the exciting fourth novel in the award winning and best-selling Bass Reeves saga of The Nations - Across the Red.

What listeners say about Across the Red

Yes. This story is amazing to be able to listen to while relaxing in your favorite chair. If you close your eyes you feel like Ken Farmer is reading just for you and telling you a story of days gone by in vivid detail.

What was one of the most memorable moments of Across the Red?

There were several scenes that were memorable but I actually like the campfire scene (chapter 11) where they they have friendly banter. All the sayings to each other that are witty and of the period they lived in. It gives you such a good idea of the time they lived in and the campfire reminds me of growing up sitting around a campfire myself.

The ending was my favorite but it was all quite intriguing.

I listened to it in stages to savor the story. I wanted to be able to enjoy it while I relaxed but you can pretty much listen while doing other things like cleaning house, working on your car, etc.

All of the books by this author are great, especially if you love westerns and history. The stories make fantastic gifts also. I highly recommend all of them.