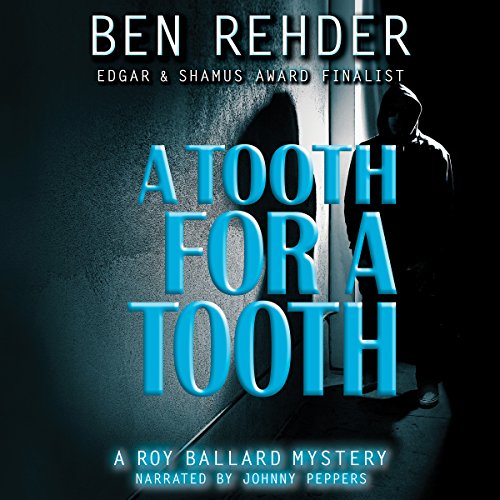 A Tooth for a Tooth

By: Ben Rehder
Narrated by: Johnny Peppers
Try for £0.00

Lennox Armbruster was struck by a speeding vehicle - but was it an accident or an insurance scam gone wrong? Roy Ballard is hired to find out, and he soon learns there’s a third possibility: attempted murder. Joe Jankowski, the man who hit Armbruster, is a tough-talking player in the construction industry, and a feud with one of his former employees has shown that he has a temper to match his brash personality. When Roy and his partner Mia Madison attempt to dig deeper, they learn just how far Jankowski will go to shut down their investigation.

What listeners say about A Tooth for a Tooth

Wow Ben you did it again, Love how it all fell out of bed at the end for the true baddie in this. Roy & Mia together are pure dynamite!

Life's a Bitch at Times

For Roy Ballard and Mia it's just another job and they start their investigation at a construction site and the person who owns it Jan Jankowski and he can be a nasty piece of work, cutting corners playing with peoples lives just to save a buck or two, so Lennox Armbruster thought he would show him a lesson but it didn't and he was hit with a speeding truck, was it an accident or foul play and that's what Lennox is claiming. Roy a legal videographer, and Mia do some work for an insurance company and this is one of their jobs, as listeners before wondered about the couple they are now engaged and hope to get married the following year, and the couple works best together, but on occasions, life throws them a curveball and this particular nasty case is just that, will it come back to haunt them? Roy and Mia are struggling with this case it seems that life just is not playing fair and it's upsetting the chemistry between them, can it be fixed? This is one of the best books and this one had me on the edge of my seat, and as ever Johnny Peppers did an outstanding job of the narration.

The 5th in the Roy Ballard series, takes you on another insurance investigation with twists and turns and surprises along the way. The investigation into whether Lennox Armbruster’s claim after being hit by a car is genuine leads Roy into all sorts of trouble as the story develops. The only downside with this book is that Mia wasn’t as heavily involved until later in the story. With Roy also struggling with his own issues that could derail their marriage he struggles to find out the truth of what is going on With the usual mix of murder, accidents and disappearances, good and bad characters this was another great book in the series. Great narration as always.

I enjoyed listening to Johnny Peppers.

A another plot and fun with Roy and Mia. Great characters and humour. Enjoyed

If you've listened to the previous books in this series, (which isn't necessary as they all work as standalones), then I'm sure you have learned to love Roy and Mia. Their partnership, business and professional, really works and the spark and chemistry between them is palpable throughout. There are some really scary moments in this book and it feels as if the rose coloured glasses they have both been wearing because they are so loved up have been broken and real life is dragging them down. Even Roy struggles to keep his usual wit and humour going. But that's what makes this series so good. Life does get in the way. Bad things do happen to good people and being in love doesn't mean you're protected from outside influences. The story is full of action, as usual, and Roy and Mia really have to work hard to stay one step ahead of the game. This may be my favourite book in the series so far. Johnny Peppers works his usual narrator magic and all in all this is a fabulous book in a fantastic series.

Another good story from Ben Rehder, this time around we did not get the whole background story from start to finish, just enough to keep track of what is going on with the main characters namely Roy and his partner Mia. The detective work they do is always very interesting not too complicated and so more realistic. My only irk is that there is too much he said, she said, in the narration but then nothing can be 100% perfect can it?

Book 5 in the series is another good story starting out with an investigation into an accident to see if fraud is involved and mushrooming into a situation involving blackmail, missing persons, assaults, shootings, murder and mayhem. Meanwhile on the personal front Roy has a secret which could totally destabilise his relationship with Mia.
This offering as usual is witty fast paced and gripping.
The narration is very good and fits the style of the book very well.
My only quibble was that Mia wasn't as present in this story and I missed their banter and brainstorming. I really liked Doris and would love to see her in future stories.
4.5/5 🌟

Here we go again Roy and Mia are on the hunt for another insurance fraudster this time it’s a man being hit by a car. Was this a genuine accident or is there more to the story and why is the driver of the car acting so suspiciously. As people start disappearing and Roy and Mia’s lives are put at risk there is a race against time to find out the truth before someone gets hurt. Along with this Roy is also keeping a secret from Mia that could derail their wedding plans and there is an old lady with cookies who for some reason I just did not trust all the way through this story but I think that may say more about me lol. Great narration as always by Johnny Peppers.

A tooth for a tooth

This case has probably been the most dangerous yet for Roy Ballard and Mia Madison, a routine fraud case quickly becomes about threats and murder bring the danger straight to Roy and Mia’s front door.
I have to say, I LOVE Doris and I hope she becomes a fixture in Roy and Mia’s life.

This is probably the most character centric book of the series so far. A lot of it involves our detectives very personally. Still it has the action, drama and intrigue typical in the series.

A good listen, with an easy to listen to narrator that brings it to life.

I really really like this series and wish Ben Rehder would concentrate more on this one as opposed to his Blanco County series which I could never get into (I tried).
Anyway, this is book #5 in this series. As with most series I would suggest listening to these books in order. They can be listened to as stand alone books but because of Ballard's developing relationship with his girlfriend I think some parts will make more sense.
The publisher's summary gives a small peek at the plot. While Ballard is investigating what may be insurance fraud he finds that the owner of the vehicle that hit a man crossing the street had previously been involved in some kind of scam. That man has been missing ever since. Ballard thinks there may be a connection but as soon as he starts trying to connect the two someone tried to kill him right on his own front steps. Then another involved person goes missing and someone is following Ballard's girlfriend.
This book has so many twists you really have to listen or you'll be lost.
Excellent suspense mystery with a little sarcasm thrown in.
Johnny Peppers does a great job narrating.
HIGHLY RECOMMENDED.
If you found this review helpful please indicate so.
Thank You.

Roy and Mia are partners in an insurance scam investigation business. They are also engaged to be married, but Roy will likely screw that up. Investigating insurance fraud involves video cameras and GPS trackers, so it should be safe but it's not because Roy Ballard gets mixed up in murders and other heavy criminal activity. The Roy Ballard series is an outstanding suspense mystery/thriller series and A TOOTH FOR A TOOTH is the best novel yet in the series. Johnny Peppers narrates superbly as usual.

Leave no stone unturned and no witness alive. Tenacity! So much corruption from small time scams to revenge and big time paybacks. Wow!
Everybody wants their pound of flesh for the ax they grind!! I was upset with Mia for leaving Roy in limbo the whole story. Maybe she really isn't the ONE!! I voluntarily listened to a free copy of this and am giving an honest review. The narrator did a great job with voices and expressions.

I have listened to all the Roy Ballard mysteries, and Book 5 was not as good, in fact, several times I turned it off and listened to something else. I did finish this book and did not like it. The plot was weak and Roy's relationship is somewhat juvenile. The man is 38 and engaged and he is acting and talking like a teenager. I get it.. he is in love with the "perfect woman." The tension that is put in their relationship is childish. I don't know if I will get book 6.