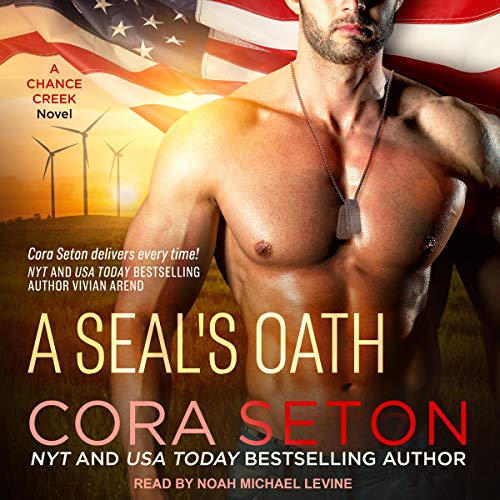 By: Cora Seton
Narrated by: Noah Michael Levine
Try for £0.00

Wanted: one wife, one baby. Love not required.

Navy SEAL Boone Rudman has six months to find a wife and get her pregnant or he'll lose his chance to win 1,500 acres of prime Montana ranch land. So when he discovers Riley Eaton living on his new ranch, all grown up from the tomboy she used to be, he decides she'll do for his bride - whether or not she's got other plans.

Riley Eaton quit her job, sold her car, and moved to Chance Creek with her friends to pursue the dreams she'd put on hold for far too long. She has no idea her uncle sold the ranch out from under her - and has no plans to marry any time soon - but when Boone shows up, sexy as hell after 15 years in the service, she begins to wonder if her priorities are all wrong.

When duty turns to desire, Boone launches a campaign to win Riley's heart. But is it too little, too late? Or can he convince Riley to forget the past and create a future worth fighting for?

What listeners say about A SEAL’s Oath

I am not a big fan of characters lying to each other, especially when its just because they don't know how to tell the truth, or knows that the truth will be a detriment to the person who lied to begin with. Crap happens, pretending that it didn't doesn't help anyone. Its called being an adult... I am also not a big fan of weak heroins that are sooo physically attracted to a man that they throw all common sense out the window, have sex, then regret it after, and still does the same thing next time. Using sex to distract a character from getting answers, or from having to give the answers feels wrong, or at least not genuine, and adds a weird kind of tension that just didn't work for this book or for me. overall story was ok, narration was pretty good. It should also be noted, as the publishers summary said nothing about this, that almost all of the female characters in this book act and wear regency style clothing. Like out of a Jane Austin book. This was a fairly major plot point for the female characters, that was not mentioned in the publishers summary at all. Wish I would have known before, as I am really not a big fan of the regency romance thing, and wouldn't have purchased it.

Fun story although a bit far fetched
How great a chance it is a billionaire buys the property you grew up and is willing to gift it to you? How big is the chance childhood friends return home at exactly the same time?
If you’re willing to accept these facts, this book might be for you.

Characters: ❤️❤️❤️❤️❤️
We get to meet an entire crew of interesting people

Noah Michael Levine: 🎙🎙🎙🎙🎙
One of my favorite (male) narrators. A good narrator is a voice actor who will slip into the role of each character. Mr. Levine is an star at that!