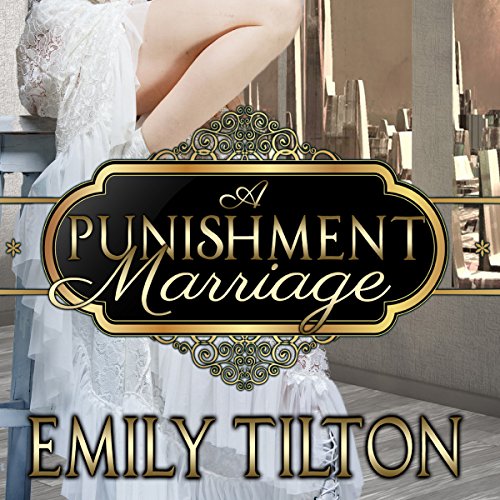 By: Emily Tilton
Narrated by: Patrick Blackthorne
Try for £0.00

Lily James knows what she wants in a husband, and it isn't some alpha male who will expect her to do as she is told. Unfortunately for her, on the planet Meliora, matches are not made based on the whims of 18-year-old girls, but by a sophisticated computer program with access to data that allows it to know a woman's true needs even when she doesn't know them herself.

Determined to make her own match, Lily attempts to hack the computer's database, but when her actions are discovered, she is given a harsh sentence: a punishment marriage. A man will still be chosen for her, but only after a thorough, intimate examination to properly evaluate her long-hidden need to be dominated. To make matters worse for Lily, once the match is made, her new husband will have full authority to take her in hand and chastise her in any way he sees fit.

Commander Eric Burton never thought he would marry again after his wife's death, but when he is offered the chance to tame a wayward bride and earn a large stipend from the government at the same time, he can't pass up the opportunity. Though it is immediately obvious that Lily will require firm and consistent discipline, the beautiful, feisty girl quickly claims a place in his heart. As Eric sets out to show her just how much pleasure is possible when she yields to his mastery of her body, can Lily bring herself to accept that surrendering to a man like him is no punishment?

What listeners say about A Punishment Marriage

A story that includes severe discipline and punishment also needs to show compassion and love between the characters.
This story does both.
Not for everyone but if you're reading this review it's probably for you!

Simply marvelous. Very good story. The characters are well fleshed. I felt for them and with them.

I LOVE THIS BOOK. it's a little short but FANTASTIC. If you like discipline, obedience, punishment, consequences D/s in a loving relationship, this is the book for you.
Emily Tilton is an awesome writer and scored a home run with this one!!!!
The story-line is delightfully written and engaging. Eric and Lily are two intriguing and wonderful characters in the lead roles.
And the narration is masterfully done by Patrick Blackthorne who is my very favorite E.Tilton narrator.

In this futuristic world, computers can read the desires of the young women. Lily was caught hacking into the system and she'll receive discipline and recondioning. What I love about this story is along with discipline and spankings, there's also love and compassion. Will Eric be the man who m Lily is looking for? The narrator completes the book. I recommend this short story.

Lily ,Eric
This was Appsolutely amazing i really enjoyed This story it was sizzling hot and so much more.
5☆☆☆☆☆ all round for the
Story
Narration