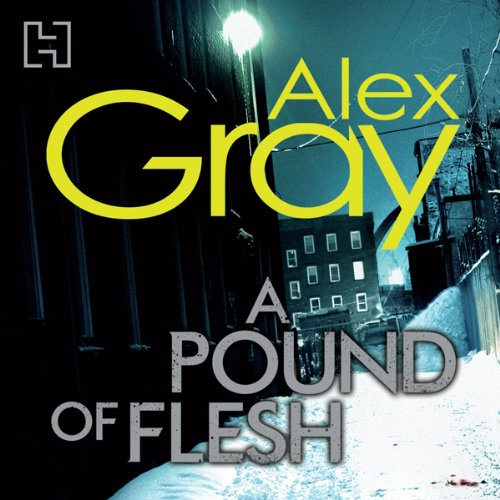 A Pound of Flesh

A Pound of Flesh is the much-anticipated Book 9 in the wildly popular DCI Lorimer series written by Alex Gray and narrated in this crime thriller audiobook by voice-artist Joe Dunlop. You will be taken into the depths of Glasgow’s underworld where two serial killers work tireless slaying innocent victims. DCI Lorimer must enter into their game and immerse himself in their sordid existence. When evidence is leaked to the press, Glasgow uproars over his efficiency. With no one backing him up, DCI Lorimer dangerously heads out alone in this case. It is utterly addictive listening. Available now from Audible.

Detective Superintendent Lorimer's worst nightmare is a serial killer loose in his city. But two serial killers operating at once on the streets of Glasgow is a nightmare come to life. Is there a link between the brutal slaying of prostitutes in the backstreets of the city and the methodical killing of several unconnected businessmen? Lorimer is never one to jump to conclusions but something about these cases just doesn't add up.

Each killer has a different MO, but their obsession with murder is equally chilling. When the latest death is that of a prominent government minister, Lorimer finds the media's relentless scrutiny turned on his investigation. Psychologist Solly Brightman is helping with both cases, but someone within Lorimer's team is sabotaging their efforts by leaking confidential police information. Their whispers will cost lives . . . As a freezing winter grips Glasgow, two killers are relentlessly murdering in cold blood, brandishing their own kind of brutal justice, each taking greater risks and claiming more victims. For Lorimer, time is running out.Evoking the gritty truth of Glasgow like no other writer, Alex Gray has created in Lorimer the most dynamic Scottish detective since Rebus.

What listeners say about A Pound of Flesh

This may be a grippingly good, edge of your seat thriller. I will never know, I got to the end of book 1 and lost the will to listen to any more of it. The narration was boring, stilted and would be better suited for someone looking for a cure for insommnia.

I think most people like to read books that are set in a background they know well. Coming from a west of Scotland, Jewish background I was always going to be a keen reader of Alex Gray's series featuring a Glasgow cop with a Jewish psychologist sidekick, however unlikely that pairing may be in real police work. However famliarity with the setting can also make one very critical of any inaccuracy in detail. When it comes to audio books the first thing that is subject to scrutiny is a reader's accent(s). Of course there is no problem with long time narrator of the series Bill Dunlop. If you wanted to be hyper-critical you could say that his reading of the famous verse from Tam O' Shanter which features in the book is a little flat and lacking in inflexion compared to how it is normally spoken but that is a very minor quibble. So accents are fine, and the fact that Solomon Brightman is very much a lapsed Jew means that there is little Jewish detail to find fault with either.

It is with the plot that cracks are starting to appear. There was a quite a vogue in '2 killer' books for a while, but I thought its day had come and gone and I was a bit disappointed and surprised that Alex Gray had opted for this device, especially when combined with that other favourite of crime writers, the killing of prostitutes. Sadly this does happen all too often in life, but it really has become more than a cliché in books set in Scotland. Without wishing to give away the ending and the unveiling of the killer, it is hardly new, even within this series. Therein likes my biggest criticism of the A Pound Of Flesh, there is a definite sense of having read it all before.

In general terms female crime writers tend to bring family life into their books than their male counterparts. Ms. Gray has handled this element well up to now, but this male reader gets wary when babies start to feature as is the case here. As the subject says, Good but... it might be time to call it a day.

Just enjoying this series so much, if you like a good detective series you will love this one . It is set in and around Glasgow which makes it special to me!
Listen to them in order,if you can and get the ongoing story of Lorimer from the start. The narrator is very good and so I move onto Book 10, The Swedish Girl!

the story was OK but references to a full moon were just ludicrous. narration was often boring.

Slow, boring, padded out and an insulting ending

Was expecting a clever crime story, with clues and evidence, a smart detective hunting a killer. Got a badly written, clichéd 12 hour episode of the bill after it had gotten a bit crap.

This book starts with a simple story idea which is then padded out over several chapters. The star of the book then fumbles around putting together the most superficial parts of the story and basically makes no progress whatsoever toward solving the crime. And then just when you think that the story is coming together at the end they throw in a massive deus ex machina and the story just solves itself with no input from the hero at all. The ending was absolutely insulting, did not make sense, was full of plot holes and had no input from the star of the book at all. Real waste of time.

As a fan of crime and thrillers, I enjoyed this very much and would recommend it. At times frustratingly slow, I found the narrator's voice well suited to the setting.

This is a good story and has a nice cast of characters but somehow it didn't really grab me. I don't know why. But I listened to all of it and enjoyed it well enough. I expected to enjoy it more. It could be too slow moving for me.

narrators voice made the characters seem older than they were. didn't like that. he should have tried to speak like a 40 year old rather than a too posh old man.

Enjoyed the easy listening style. Good for lovers of detective fiction. Will try another of this author's books

Another good mystery in the series. I do so enjoy a Scottish police - procedural - if this is what it truly is. The author has sprinkled a bit of fairy dust over the main characters. I didn't mind a bit.

the story is not thrilling or suspensefull and it does not grip the reader. Easy to forget

Although one of the 'villains' was obvious before too long this was still a good listen. The narrator performs characters well and it's nice to have a Scot reading a book set in Scotland. I'm always looking for well spoken mysteries and will try another Alex Gray