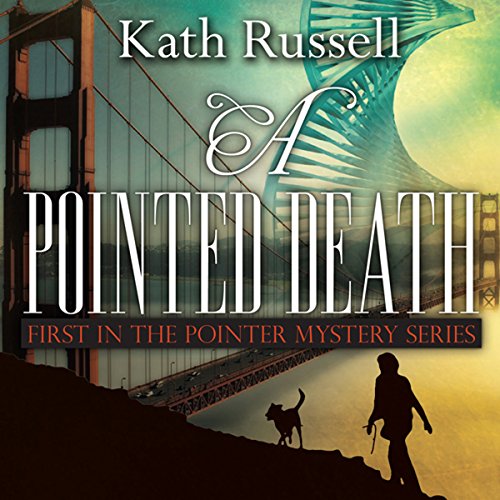 Welcome to the world of Nola Billingsley, a 40-something biotechnology whiz, with an adored shorthaired pointer, who finds herself embroiled in both a nefarious murder and a blazingly hot new romance in the thriller A Pointed Death by Kath Russell.

When techno genius Nola Billingsley finds her former employee - an amoral creep who stole secrets - murdered, she doesn’t exactly shed tears. Instead, she begins a flirtation with the inspector assigned to the case. With her shorthaired pointer Skootch watching her back, Nola and her group of techno pals try to help solve the murder, bringing into play Nola’s feisty feminism and idealism, and putting both her life and her love affair at risk.

Finding a link between the Chinese government and American thieves, she bands with a group who believes that biotech people should protect their industry from any evil abusers. Could there be a government plot afoot, and can she save the world even as she tries to salvage her love life?

Smart, witty, and playful, A Pointed Death looks at the biotech industry with a decidedly feminine slant. The writing is edgy and full of humor, and the plot twists and turns with surprise after surprise. A breathtaking thriller with a unique background, A Pointed Death announces the debut of an enormously talented new writer to watch.

Yes, the story kept my interest with light and dark background, bio data was easy to follow even though my only knowledge of this science is a friend who worked in the field but when discussing her work she was to detailed, I like the easy attitude about the science with the interplay of man and dog.

What was one of the most memorable moments of A Pointed Death?

When her dog was fighting with the birds for the wet lump, thought it was going to turn out to be the missing item from the corpse

Have you listened to any of Kate Luhr’s other performances before? How does this one compare?

Would enjoy further stories with these characters

The narrator seems to be in a race against the book! She reads so fast you can hear her swallows & gulps for air! I did manage to finish the book, but don't think I will ever listen to another one narrated by Kate Luhr - very distracting. I'm not even sure about the writing, the reading was so "let's just get through it."