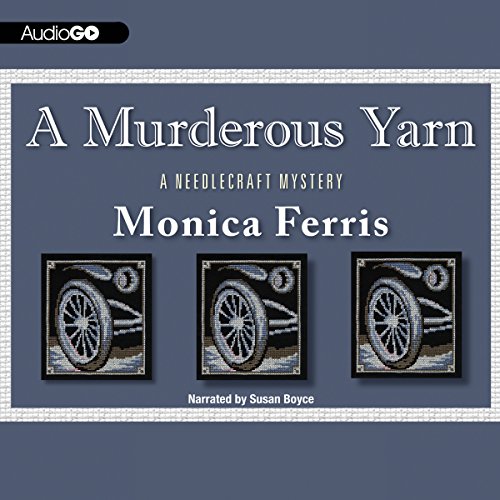 Heavens to Betsy Devonshire! She never intended to get so caught up in this year's antique car race. But as sponsor of one of the entrants, she can't help but keep a close eye on the outcome - and it's not pretty. One of the drivers never makes it to the finish line. His car is found exploded in flames. Now Betsy and her crafty friends must determine if it was an accident or the work of a jealous competitor. The answer may be in a piece of needlework, but pinning down a suspect won't be easy....

What listeners say about A Murderous Yarn

Entertaining, but denouement is a bit tenuous

I love the needlework mysteries, and they are always very well read, but the rationalisation at the end was a bit unconvincing.

Not up to usual standard

All about antique cars. So much boring detail. Felt a bit like wading through mud. None of the usual charm.

I sound like a parrot when I write these reviews. They are simple, clean mysteries. They border on silly, but they are also enjoyable. It is so hard to find a book that can be listened to by young and old alike.

I will listen to them all, and hope you enjoy them as much as I do.

What made the experience of listening to A Murderous Yarn the most enjoyable?

The narrator is great and easy to listen to. She does a great job in making the story come to life with wonderful narration.

The plot is wonderful and light, the mystery is something that makes one think. Trying to figure out what the clues are is fun and the characters are wonderful.

A great story and the intertwining of the antique cars with needle arts is so refreshing.

I like the characters and their further development. Loved the idea of the antique cars and got more insight to Betsy, the main character. I have listened to several, maybe 5 of these - however this one was a big disappointment. There was not near the investigation by Betsy, we didn't get the little minutia, and logical thinking that Betsy usually goes through. It was a much thinner plot, not as involved, in fact fairly transparent. I will listen to one more, and if it's this 'simple' - then I'm done.

Would you consider the audio edition of A Murderous Yarn to be better than the print version?

I know it hasn't been from my previous reviews since the recordings have been available before I started the series. Just have to say that the narrator has improved some and there are now a few small variations in her voice assisting in depicting the characters and in giving some life and interest to the story. Please keep it up and do add more to future recordings.

Betsy Devonshire, owner of Crewel World is sponsoring Lars Larsen in his Stanley Steamer on the Antique Car run. When one of the car and its driver, Bill Birmingham doesn't make it back, it is discovered that his car was found burned to a crisp along the drive back. His car was having some difficulties and he was working on it intermittently all during the race, so it was thought that it was an accident, at first. But soon it was determined that he was shot prior to the fiery explosion. Now Betsy, successful amateur sleuth is on the job again, along with her police woman friend, Jill. This is a fun addition to the series, with all the normal characters included. Great story and resolution to the murder.

Monica Ferris has written another winner. Good mystery with all the characters I’ve come to enjoy.

Old Cars and Murder Travel Together!

Would you listen to A Murderous Yarn again? Why?

I will probably listen to this book again and I will also recommend it to friends. I have already bought her next book.

What other book might you compare A Murderous Yarn to and why?

I don't really know what would be a good comparison except maybe a murder show on TV that is completed within the 45 minutes. It is simple and straight-forward rather than intricate like Agatha Christie or Arthur Conan Doyle.

The car run through Litchfield, MN. The descriptions of the cars, costumes and action were well-written.

The characters are well-written. You can thing of them as friends very quickly.

There were a couple things about this audiobook that bothered me. Foremost, that Susan Boyce did not know how to pronounce the names of Minnesota towns. Every time she erred, it took my mind from the story. The second thing, that I could figure out the murderer too soon.