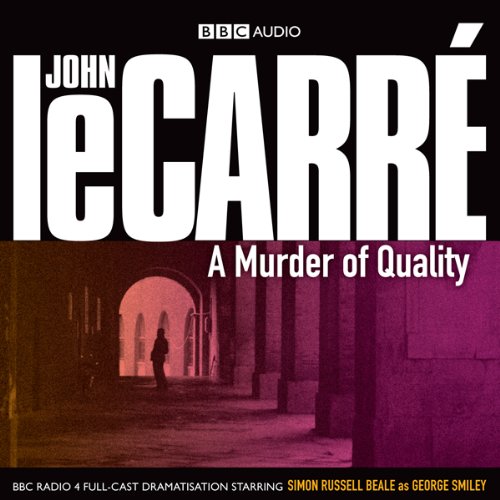 A Murder of Quality (Dramatised)

A Murder of Quality, set in the early 1960s, sees George Smiley investigating a murder in a public school. When the wife of one of the masters is found bludgeoned to death, Smiley, out of loyalty to an old friend, agrees to look into the case.

But his investigation raises a multitude of questions. Who could have hated Stella Rode enough to kill her? Why was her dog put down shortly before the murder? And what did Mad Janie see on that fatal night?

To discover the truth, Smiley must lift the lid on a world of hidden passions and dangerous hatreds.

Starring the award-winning Simon Russell Beale as Smiley and with a distinguished cast, including Geoffrey Palmer and Marcia Warren, this tense, compelling dramatisation perfectly captures the atmosphere of le Carré's gripping, sophisticated thriller.

What listeners say about A Murder of Quality (Dramatised)

I would describe Le Carre's writing as 'good company'. The story and dialogue are interesting, and his characters are likeable and sympathetic. I feel I am in good company when I listen to his books and the dialogue of his characters. I suppose it is partly the friendliness and thoughtfulness of Smiley, for example, and his lady colleague, in this novel in particular.

But I felt the same about 'The Spy who Came in from the Cold'.

Well acted,but a very short story for the price.Should have been given away as a thank you to good customers!!!

This one kept me up, a few red herrings and a mystery " not who I thought the murderer was" ??
Excellent casting with the actors, a true murder mystery. This one is a keeper.
Highly Recommended.

This is an excellent BBC adaptation. The casting is good and I found the story very enjoyable.

Quite simply the best

The BBC Radio 4 dramatisations of John Le Carre's George Smiley novels are the best I have listened to. The performance are perfect, Simon Russell Beale is George Smiley. The abridging of the novels is wonderfully done. An absolute delight, listen to them all!

Highly recommended, this wonderfully cast Le Carre which is a break from the spy novels we've all come to know and love.

Would you consider the audio edition of A Murder of Quality (Dramatised) to be better than the print version?

This is a dramatization of the story. I have neither read nor listened to the original story.

There are no people like the Brits for putting books to TV, radio, or other cinematic endeavor. They stay true to the author, unlike Hollywood folk who have the brass to think they can improve on the original. True to form, this cast is excellent! As always, the BBC has done an excellent job!

I listened to it while I walked my dog and the time flew! very well acted.