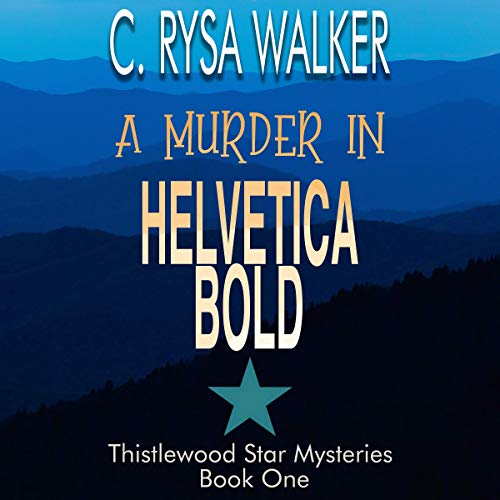 A Murder in Helvetica Bold

A Murder in Helvetica Bold

When Ruth Townsend’s job and marriage both end abruptly, she heads home to the mountains for a fresh start. Nine months later, she has a new hobby, good friends, and a potential new romance - but only two dozen subscribers to the weekly newspaper she’s intent on reviving. What she needs is a good mystery...but nothing ever happens in sleepy little Thistlewood.

Then Edith Morton is found dead at the bottom of her staircase. Her son and the sheriff both assume that the old woman jumped, but a shattered teacup and eerie passages from Edith’s diary about a dark-haired boy lead Ruth to believe there’s more to the story. Was Edith simply a victim of dementia, or did someone push her over the edge? Ruth is too curious not to keep digging, but her investigation is unearthing secrets someone spent decades trying to hide.

Can Ruth find out who killed Edith Morton before she or someone she loves becomes the next obituary in the Thistlewood Star?

What listeners say about A Murder in Helvetica Bold

A great beginning to a new series

I have only read the first book in this series so far, but it is an excellent beginning and I will definitely read the next one. The characters are likeable but have varied backgrounds and perspectives . I hope we will learn more about each backstory as the series continues. If Stephanie Plum and Kinsey Milhone get a little wiser as they age, I think they will end up like the protagonist Ruth Townsend.

A+ for A Murder in Helvetica Bold

Loved this story! Ruth is a great character, I love her sass and strength. Great supporting characters too. And I loved the mystery for this one. I hope to see more audiobooks, especially if they are read by Kate Rudd because she is one of my favorites. Can’t wait for the next one!

Ruth Townsend moves back to her hometown in hopes of reviving the towns newspaper, and starting a new chapter in her life. But what she really got was a murder, that she feels compelled to solve. I really enjoyed this book on a cool rainy day it just seemed appropriate. There is plenty of action and suspense with a slight sprinkling of humor. This book was a lot of fun to listen too and narrator Kate Rudd is just a awesome narrator, and brings books to life and pops you right there in the middle so you can help Ruth and her friends try and solve the case. This book/audio is a wonderful read/listen on a cool rainy day with some tea or maybe as you sit on a warm beach with a nice drink.

Wonderful Performance of An Average Book

I actually listened to this book on audible instead of reading, which highly enhanced the experience of the book. The first book I read was Baskerville for the Bear and found it to be a delight. A Murder in Helvetica Bold, while about death and murders, was also a fun read. I felt a little like I was listening to an episode of Scooby Doo (spoil alert), which turned out to be a bit more true that I originally thought. Overall, the story-line fell in line with the genre that it is in, which would have rated it a 3 stars since there isn't anything super special about this book. It was just a fun, easy read. The reason I bumped it up to a 4 star review is because of the audible version. The narrator was pleasant to listen to and she did such a great job reading that I didn't realize how quickly I was going through it until it was completely done (about 4.5 hours later). Definitely would recommend this book to cozy mystery lovers.