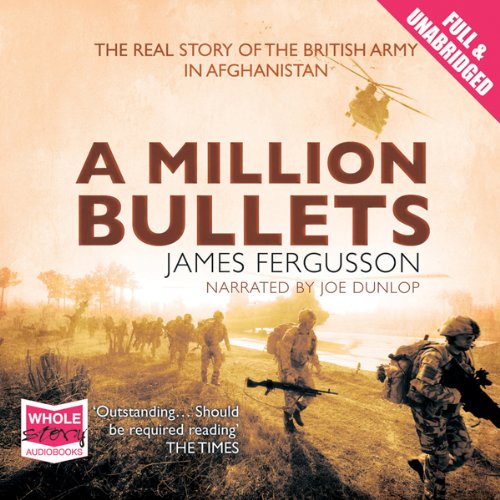 By: James Ferguson
Narrated by: Joe Dunlop
Try for £0.00

In 2006 a British peace-keeping force was sent to Helmand province in southern Afghanistan. Within weeks they were cut off and besieged by the Taliban. Here, in their own words and for the first time, are the young veterans of Herrick 4- alongside the words of the Taliban themselves. Fergusson examines the war in Helmand and asks this most troubling question: could Britain have avoided the violence altogether?

What listeners say about A Million Bullets

Interesting story, told by an android.

Well spoken and easy to understand but painfully, painfully wooden.

A very important story but sounds like it was read by a text-to-speech app.

A great history of the British Army's time in the early days of Op HERRICK, only negative is the authors very slow reading. Example the machine gun GPMG is read as "Geee Peeeeee emmmmm Geeeeeeee"

This is a good book, it covers a one year period in Afghanistan of British effort to pacify Helmand province, I'm amazed at some of the narrow escapes their are! Recommended!

This must be read/heard by everyone with an interest in COIN operations. It pulls no punches. the narration is perfect. what we need now is for the author to update it as at 2020.

Great insight to various aspects of the war in Afghanistan, sadly the speed of the narration will eventually get on your nerves, as its a tad to slow.

Still worth a listen though

Enjoyed the audiobook, good story and analysis of the conflict. The narration is a little wooden though.

Tough stuff, and a must listen

I had no idea just how complex an engagement this book scratches the surface of, and would encourage anyone else, who like me has only a rough idea of what is going on as informed by media headlines, listen to this.
Well presented engaging stories, illustrating some of the complexities and contradictions of NATO in Afghanistan.

This is a great and fascinating book, but the narrator is truly AWFUL and ruins the whole experience. Really disappointed, I kept losing interest in it, due to the sheer monotone boredom of his voice, totally wrong for this type of book. The publishers should be ashamed of this recording.