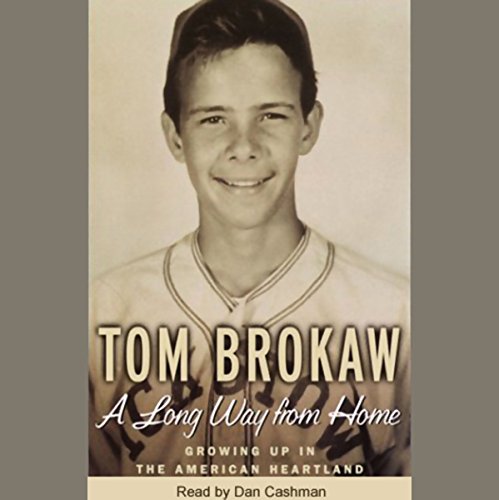 A Long Way From Home

Growing Up in the American Heartland
By: Tom Brokaw
Narrated by: Dan Cashman
Length: 6 hrs and 16 mins
Categories: Biographies & Memoirs, Memoirs
3 out of 5 stars 3.0 (1 rating)

A Long Way From Home

Tom Brokaw, a trusted member of our elite journalistic core, writes a beautiful memoir of his quintessentially American experience: from his parents' life in the thirties, to his own boyhood on the prairies of South Dakota in the forties, to his early career as a reporter in the tumultuous sixties, up to the present. When Brokaw's father, a genius with machines, moved the family to Pickstown, South Dakota, it became the pivotal decision in their lives. They began to live the American dream of community, middle-class pleasures, and a good education for the children. Reflecting upon his "Tom Sawyer boyhood" along the Missouri River, he describes his pilgrimage to adulthood, and considers what brought him and so many Americans of his generation to lead lives a long way from home, yet forever affected by it.
©2002 Tom Brokaw (P)2002 Books on Tape, Inc.

"An honest, moving testimony to the values and virtues instilled in someone growing up in the heartland in the 1940s and 1950s and to the veracity of the maxim that you can't go home again, but you always take a piece of home with you when you leave." (Booklist)
"Brokaw...has a knack for delivering quirky observations on small-town life...." (People)
"Breezy and straightforward...much like the assertive TV newsman himself." (Los Angeles Times)

I Enjoyed It Very Much

I only wish Mr. Brokaw had been the narrator. A lot of history in addition to his story.

No. It was interesting gave me an insight to Tom Brokaw and how he remained so grounded.

What else would you have wanted to know about Tom Brokaw’s life?

It would have been nice to see some family photos.