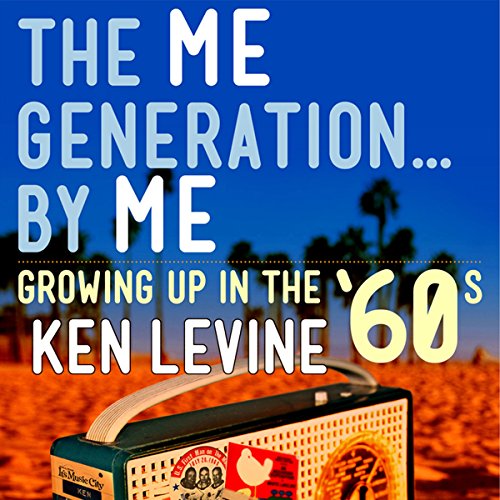 Join Emmy-winning comedy writer Ken Levine (MASH, Cheers, Frasier, The Simpsons) as he attempts to grow up in the most exciting and turbulent decade of the 20th Century. From the California Myth, to the Sunset Strip, the war, the Beatles, the hippies, the riots, the drugs, and the sex - Ken Levine has lived it (although not as much sex as he would have liked). He shows you what a profound and indelible effect the '60s had on him and the world through a series of hilarious (and sometimes harrowing) first-hand recollections that will put you right there with him.

What listeners say about The Me Generation...By Me

A trip through the 60s with a hilarious tour guide

Ken Levine's "The Me Generation... by Me" tells the story of one boy's trip through the 60s. Unlike other tales from that era, Levine's isn't particularly newsworthy. He wasn't involved in any of the major events of the time; He wasn't a political activist, he wasn't a hippy, he didn't attend Woodstock, he didn't even see The Beatles.

Instead the story is arguably more poignant for all of these things. This the story of the 60s as told by a typical teenager of the time. Like most of us, Levine spent his teenage years trying to find himself and his place in the world, aware, but not directly involved, in the major news events of the day. In other words, this is what the 60s were really like for most who lived it.

Luckily for us, Levine is highly amusing (as you might imagine, given his background), with a wry and self-deprecating outlook on life. There isn't a page in this book that doesn't have a several humorous asides, which makes it a light read, and perfect for dipping in and out of. I initially worried that the constant jokey comments might keep the book from feeling substantial, but by the end I felt genuinely moved.

As someone who's always been enamoured with that part of American history, I found this to be an insightful and valuable glimpse of what my experience would have been if I'd been born in early 50s America. The optimism and subsequent sense of loss is well documented, but I really got a sense of what that felt like. You can't help but feel sorry for those who had to endure seeing their hope destroyed by the pointless acts of extreme violence that shocked the nation.

Even if you don't have exactly the same experience as me reading this book, I can absolutely guarantee that you'll be entertained and amused. Levine's decades spent crafting comedy, and his own likeable personality, shine through on every page.

Whether you were around at the time, or have an interest in the 60s, or were just a teenager once, I'm positive you'll enjoy this trip.

Funny and thoughful memoir of the 1960s

Would you listen to The Me Generation...By Me again? Why?

A look at growing up in the 1960s by tv and film comedy writer Ken Levine. Levine is an entertaining reader and his book is funny, sardonic and communicates to this listener what it felt like to grow up in the 60s. It both is and is not your typical story of growing up during that time. Here's hoping Levine writers another volume on the 70s. Highly recommended.

What did you love best about The Me Generation...By Me?

The book's author, Ken Levine (with Honoria Feldman being a close second).

What does Ken Levine bring to the story that you wouldn’t experience if you just read the book?

Ken's delivery of jokes is spot-on - and his stentorian tones are quite soothing.

It made me laugh a lot. It didn't make me cry at all.

I listen to more than a dozen books on audio every year - and this was easily the most enjoyable in memory.

This book fell into my library because I liked Tom Brokaw's book on the same subject. Yes, sadly, I didn't have a clue who Ken Levine was (by name) but sure knew his work. The first time out I laughed and lamented not connecting the name to him long ago. Wow, what a writer and narrator. He needs to do more on his life and experiences.

As for this book, I LOVE IT, absolutely LOVE IT! Now I'm not as "mature" as Ken but still old enough to remember some of the end of the decade in my own ways. I came of age a decade later but the story, regardless of era, is fantastic, funny and a joy to listen to. I've enjoyed it I don't know how many times over the year since I downloaded it. Sure, it's all "Ken's" story but that is what it is...and it's also so many others from the same generation. I've shared the book with others who are the same age as Ken and they love it too. That says so much about the factual basis for the stories and the content and narration. Thanks Ken!

Horrible, not funny, not entertaining.

This book was horrible, I expected a professional comedy show writer to have lots of funny or interesting things to say. There was literally nothing not one thing funny in this book. And it read (listened) like a boring geek trying to summarize the highlights of his high school journal.