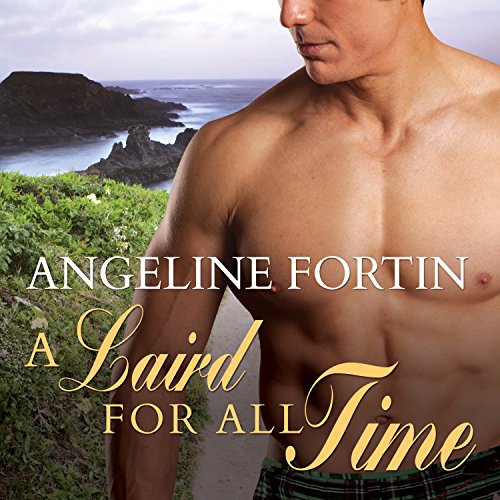 By: Angeline Fortin
Narrated by: Kirsten Potter
Try for £0.00

After 10 long years of education and residency, Dr. Emmy MacKenzie decides it's time for a much-deserved vacation. But when she's traveling the British Isles, a twist of fate at the gates of the ancient castle of Duart hurls Emmy more than a hundred years into the past and into the arms of a magnificent Highlander who thinks she is his long-lost wife, Heather MacLean.

The 10 years since his new bride abandoned him on his wedding day have brought Connor MacLean, earl of Strathclyde, nothing but misery and bitterness, but that is nothing compared to the anger he feels when she shows up on the 10th anniversary of that day. Determined to punish her for the humiliations she dealt him, he is shocked when his wife insists that she is not his wife at all. Though he tries to cling to his anger, Connor cannot deny the attraction he feels for his mysterious wife, and soon he finds himself wanting nothing more than to take her in his arms and make her his.

When the truth of Heather MacLean's disappearance comes to light, more than just Connor's life could be destroyed. Choices will have to be made. Forgiveness begged. Second chances taken not just for the people of Duart but for Emmy herself.

A story to listen to again and again

I've actually tried two previous time travel romances and weren't able to finish either one. This time I got this title because of the narrator Kirsten Potter. She is an absolutely amazing narrator because she makes distinct voices for each character and she adds so much emotion to the stories that usually I end up crying when listening to her (and I'm not a crier).

The story itself is fun a la "Kate and Leopold". The time travel aspect was worked in a believable and creative way and the romance was intense, sweet, sexy and complex. The ending was a lot better than what I was expecting. It had some unexpected twists that made the story even better.

If you enjoy historical romances, time travel stories and amazing happily ever after endings then don't read any more reviews and get this book immediately!!! You'll love every second.

This is a fun, lighthearted time travel romance. I'm sure there are some that will say that the plot is reminiscent of "Outlander" but this one is more quirky and playful.

Dr. Emmy MacKenzie, the herioine, is a strong, independent woman who is thrown back into the time of Connor MacLean, earl of Strathclyde who is a man seeking revenge. Its quite entertaining to witness the two of them trying to communicate and understand the slang of different centuries. Their differences draw them together and apart while they learn the challenges of taking risks for love and second chances.

This is a good story for those who like time travel romance escapes.

I honestly hated Emmy and thought she was condescending and rude. Considering she knew she traveled to a different time and yet still expected everyone to know modern day slang. It was really annoying. Plus, I didn't like the tone the narrator gave her. Like she was constantly talking down to everyone. Idk why I kept listening.

A Laird for All Time

Normally Historical isn’t my favorite genre but I do love a time travel romance. Emmy is the time traveler and for the most part I think she handled it and herself with grace. I would have freaked out.

The fact that she fell in love with Connor but also his family it was a sweet romance. When she went back to her time. I swore out loud lol

All was not lost. It is a great lesson for sure. Very glad I gave this book a chance and the narrator does a great job with not only the accents but the male voices. I very much enjoyed.

DOCTOR unexpectedly travels through time and turns into a complete idiot. No respect or healthy fear for the culture she fell into. Repulsive.

Nope I could not listen to it all.

Time travel -- but NOT an Outlander wannabe

When I first began listening to this, I was skeptical and thought it might be just another Outlander copycat. In fact, it does have some commonalities -- time travel (100 years into the past), a female doctor (ob/gyn), and Scotland. However, it ends there. The plot has some very different aspects and characters.

The narrator (presumably North American) does a relatively good Scottish accent, although it's a bit irritating that she rhymes "nae" (such as in could nae) with "eye" -- it happens quite a lot.

There are a couple of holes in the story (SPOILER ALERT), but not enough to ruin the enjoyment. For example, why does Emmy, who is so anxious for people to believe that she comes from the future, doesn't show her cell phone right away. Also, why didn't she bring a solar charger back with her?

Anyway, in general, it was entertaining.

Cute, interesting plot idea but I really had a hard time actually liking the main character Emmy. There were so many inconsistencies and unbelievable circumstances, and that was all during travel in time which can be fun. I had too many "but I thought" moments during this listen it had me wondering if there had been an editor.

Had the above stated issues not existed it would have been a very interesting and fun plot to explore.

Kirsten Potter is one of my favorite narrators but I don't think this was a good fit for her. Just my opinion.

I didn't care for it therefore I don't recommend it.

A light hearted and throughly enjoyable read. Emmy and Connor's story is a page turner. It will make you smile and laugh out loud.

Had great potential, but while I like the other characters I found the heroine to quite annoying at times and felt that the ending was insanely rushed.