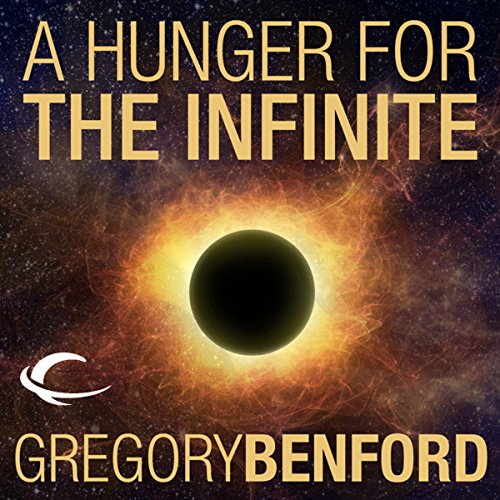 A Hunger for the Infinite

A Hunger for the Infinite

A Hunger for the Infinite, which first appeared in Robert Silverberg's Far Horizons anthology, is a novella that takes place in the universe of "The Galactic Center Saga", detailing a galactic war between mechanical and biological life. Here, the pilots had made it to True Center in order to destroy something, anything, important to the Mechs, but Paris had something else on his mind. A story of the Mantis, and the decline of humans beginning in 3600 AD.

What listeners say about A Hunger for the Infinite

This was a freebie that caught my attention and so I grabbed it. The narration is excellent, the short story visceral and enjoyable. It treads no new ground but is a pleasurable listen that pulled me into its universe and took me out of my own for an enjoyable period. I wish the rest of the Mech series was available on here now as I would listen to them all.

I never thought I could be so creeped out by robots. The antagonists of this futuristic sci-fi novella are called "Mechs." They see humans as vermin, and the author luridly describes some of the tortures they inflict upon the human race. Even more disturbing than the grotesque and perverse artworks created by the Mantis, a mech that is trying to understand humanity (literally from the inside out), is the voice that the narrator gives to the character. It is calm and polite, almost soothing, as it talks of "harvesting" humans. Eeek!

I thought this novella was great. The language is definitely poetic and sometimes slightly vague, alluding to things that are left unsaid. The mood is cold and dark, but also witty and elegant. There were moments of extreme beauty and elation, but also chilly fear.

This novella is not warm, and its not really friendly. It explores some frightening and complex themes. If you need obvious story telling with copious amounts of dialogue, you will probably not enjoy this story. I loved it. The narrator is excellent. I will be purchasing all available books from this author.

The story builds very well in discussion of art and human life. The Mechs were very frightening and viscerally abhorrent, which made their talk of art and well… not beauty, but experience… very interesting. The very end resolution stuck me as a little flat and pedantic, though. Still, solid story and lots of lovely, lurid detail!

This free 1 ½ hour novella will allow you to decide if the Galactic Center Series is worth perusing.

Personally I will not be getting any more books in this series but this is a case where you shouldn’t be relying on reviews.

Go ahead and download it. If you do not like it you are out no money and only a little time.
However
If you do like it you not only received a free novella, you now know of a series of six books that are probably your cup of tea.

A Hunger for More Gregory Benford

What did you love best about A Hunger for the Infinite?

This is an excellent story, especially for those who like a lot of hard science in their science fiction. This novella has it all: vibrant characters, very-alien intelligent machines, spaceships and wormholes...all wrapped up in a fast-paced, good guy-bad guy action extravaganza. The story takes place in a far future where "enhanced" humans living near the Galactic Center spend their lives pursued by relentless machine entities (most notably the Mantis, whom you won't soon forget). Benford has done a great job of world-building here; and he paints his fabulous, colorful 3D universe with a truly spell-binding--almost poetic--narrative flourish.

This would have to be a tie between the main protaganist Paris, a human who takes advantage of his "special" abilities to become the leader of his clan and a formidable foe to...my other favorite character, the aforementioned Mantis. Here Benford has created a very memorable super-advanced killing machine whose personaility somehow resembles Hannibal Lector: eerily cold and patently evil, with a few seriously twisted tendencies...

What does Robin Sachs bring to the story that you wouldn’t experience if you just read the book?

He reads the Mantis part well--soft-spoken, but very creepy, evil character. You can't get that by reading it yourself. Sachs also does a superb job with Benford's incredible narratives describing the Galactic Center: that material alone is worth the price of admission.

Man vs. Machine in a distant future, where survival depends on far more than instinct...

Although I read Gregory Benford's entire Galactic Center series back when it was first written, I never knew of this novella. After hearing the story, I'm absolutely going to be purchasing each of those six novels in the series, now that they've all been recently released on audio.

What did you love best about A Hunger for the Infinite?

The author's ability to cram so much vitality into the main character's live while fully exploring the environment in such vivid detail and quenching the thirsts for those of us with the need for scientific knowledge (theoretical and non-theoretical alike). And the way he was able to interject the feelings of the defeated and enslaved throughout the whole novella and battle was a wonderful insight.

The Main character, regardless of name, could be any one of us or at least what one would strive to be...

Which character – as performed by Robin Sachs – was your favorite?

"Mantis". To be a machine yet wanting to understand, albeit morbidly, the human condition, was very well translated by Robin.

The human ability to adapt cannot be defeated

Only complaint is that it was too short. At least it was developed into series which I will definitely include in my future collections. It is definitely worth the small change to purchase and far exceeds the ratio of enjoyment vs. cost.

Would you try another book from Gregory Benford and/or Robin Sachs?

Unlikely, but authors often write better books as they develop skills, and accomplished writers often try something new with poor results. I would not assume that Gregory Benford work is all like this.

What could Gregory Benford have done to make this a more enjoyable book for you?

The narrator was excellant.

Not unless the advertisements for the movie were deceptive, and I probably would not stay for the ending.

I could argue this book should get 5 stars. I could argue it deserves none. I give it 3 as result of the indecision. Most books contain some philosophy, the author bombarding the reader with his or her self-described wisdom about the life experience. This book contains abundance. It is not what I would call science fiction. Artistic fiction, maybe, an hour and a half of vivid descriptive language involving long sentence with seldom used words, but there is no science in there anywhere. No description of the space ships; no explanation how they work, no flow of time, only a lot of gore with no suporting science as to how it was created. Some readers may like that. It’s not for me.

At a writer’s conference a few years ago, the speaker explained that there was a basic format for all “good” stories. Three acts, character development, plot, setting, tension, resolution, dark moments; Gregory Benford was obviously not at that conference. The speaker further explained that some artistic authors purposely deviated from the tried and true methodologies. This book is an example of severe deviation. The speaker said there was a name for these writers. Homeless is the word she used.

If you read for a better understand your inner psychology, you may find value here, and I have to say, it was worth every penny I paid for it.

I guess sometimes you get what you paid for, and since I got this for free I can't complain too much.

This novella and I just didn't click. Maybe I have gotten used to different styles of writing and different types of perspectives but much as I tried to I couldn't get involved in this book. Written in the more classic SF style and dealing with more of the strange (yeah, the main character was human, but far removed from present day humanity) I felt like I was tossed into the middle of something that I didn't have the background on.

Overall not a complete waste of time, but the odds of me ever reading/listening to this again are asymptotic to zero...

Do you think A Hunger for the Infinite needs a follow-up book? Why or why not?

This is a set-up for a long series, so yes.

With Benford's Galactic Center series you are getting big, really big, ideas and not much character development, particularly in a shorter story like this. This is more of a sample to see if you really want universe spanning ideas that can seem cold, bleak and distant. Ultimately the series gets down to the fate of the universe and there is nothing warm and fuzzy about that but some intellectual speculation and mind-blowing ideas.

What disappointed you about A Hunger for the Infinite?

Has A Hunger for the Infinite turned you off from other books in this genre?

trying to work with such mediocre material wasn't a help.

What character would you cut from A Hunger for the Infinite?

ummm, can we start with the protagonist?

A narrative, but not a story

I cannot think of anyone.

Would you ever listen to anything by Gregory Benford again?

Some were tolerable, none were favorites.

I am sorry I wasted my time on this. To be fair, I listened to it all--I shouldn't have.

It misses the mark by not creating a character about which one cares.