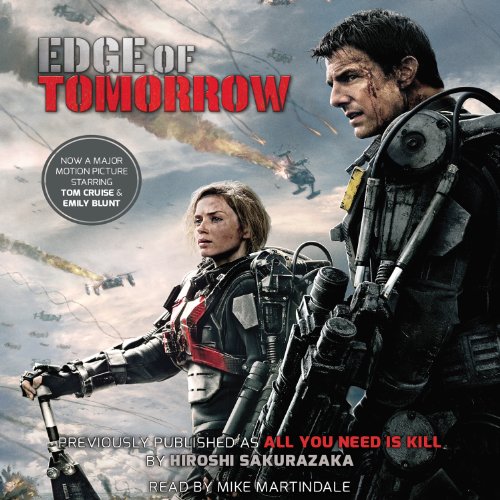 By: Hiroshi Sakurazaka
Narrated by: Mike Martindale
Try for £0.00

When the alien Mimics invade, Keiji Kiriya is just one of many recruits shoved into a suit of battle armor called a Jacket and sent out to kill. Keiji dies on the battlefield, only to be reborn each morning to fight and die again and again. On his 158th iteration, he gets a message from a mysterious ally - the female soldier known as the Full Metal Bitch. Is she the key to Keiji's escape or his final death?

What listeners say about Edge of Tomorrow (Movie Tie-in Edition)

Stick to the movie

Needed more story - I guess it would read better in it's original graphic novel format.

Would you recommend Edge of Tomorrow (Movie Tie-in Edition) to your friends? Why or why not?

I couldn't recommend this really. The movie was much better (and was the reason I bought the audio version), it was too short and just didn't make sense to me.

Average narrator, but I guess he was constrained by the content. Poor voices.

Could you see Edge of Tomorrow (Movie Tie-in Edition) being made into a movie or a TV series? Who would the stars be?

It already has been made into a movie!

Watch the movie or read in it's original graphic novel format, don't waste your time with this.

Although there will be a distance between book and film, some of which which be the interesting clashes and mixing of food stuffs that make this story amusing and accessible, it's still a great, slice of sci-fi silliness, if you only saw the film...the book is still worth reading.

not as good as the film

Normally when I have read the book a film was based on I've been amazed at the extra detail, but as this was originally a graphic novel there isn't much detail. It's as if this book is a summery of the full book!

Super enjoyable if you liked the film

Really enjoyed this more than I was expecting. I wasn’t to sure about the ending but at the same time I wouldn’t mind a sequel which the ending allows

I really enjoyed the edge of tomorrow movie and the book blew the movie adaption out of the water in every way, which is impressive as edge of tomorrow was a fantastic movie.
Won’t give anything away from the plot but I laughed and cried listening to this tale.

I got this some time ago, when I first listened to it I loved it. Then audible changed the book without asking or my permission to this movie tie-in edition. It took out a big part of the book showing the main characters training. The book is lacking now, nothing like the story I originally bought and loved. Shame on audible

If you wathed the movie, skip it

I picked up this novel after realizing that the movie I enjoyed was originally based on it. That may not have been the right mindset to go into a book with but it can't be helped.

Immediately I loved the changes that I was seeing. The different characters, similar premise, and subtle changes made the book brand new for me. It's like they had taken a premise that I loved and put a whole new spin on it. Funny, I know, since this was actually the original but I was having a great time.

Then the downsides started popping up.

The first would be the length. Normally when someone turns a book into a movie, they need to trim a lot of fat in order to fit the important parts in. This book was the opposite. At less than half the length of my usual fare, the characters all felt flat and weak. The main character changes very little despite his growth in skill, and the heroine is a little girl with a weak backstory. Even the supporting cast are all one dimensional and forgettable. Even now after just finishing it I can't even remember a single one of their names.

The second, issue was the explanation of the technology in the world... Or really the lack of it. Nothing is truly explained, and whenever something is, it feels like the characters are making very unintuitive leaps to come to their explanations. From the bad guy's origins, to the final fight, nothing felt like it made sense. I can only suspend my sense of disbelief for so long before I have to slam on the brakes.

All this would be forgivable if it wasn't for the ending. Without spoiling anything, I really did not enjoy this ending. There was a chance for something really good here but instead of anything getting solved, it felt like it was left open for a possible series. In fact, I'm not sure if it was some subtle details I can't recognize, or just the Japanese atmosphere, but it feels like one of several animes that were started but never satisfactorily finished.

In the end, this story is interesting but only if you don't have the much more satisfying movie to compare it to. Read this novel if you're interested in time loops, then go check out the film version once you're done.

Good story, but the wrong reader

I enjoyed the story quite a bit, the descriptions of it as a sci fi twist on Groundhog Day aren't far off the mark. It was entertaining, fast paced, and with a surprising amout of humor.

My one issue is that the reader is all wrong. He doesn't do a bad job with the story, but the narrator is a teenage boy fresh out of high school. The reader is a gravel voiced middle age man, and doesn't try to modulate his voice accordingly.

Would you listen to Edge of Tomorrow (Movie Tie-in Edition) again? Why?

I love military Sci Fi Fiction. This captured the horrors of war while relating it to this generations view of war as a video game. Excellent satire as always from one of my favorite Genres.

Rita, The Full Metal Bitch. It was a short story but her character was Cold as ice and surprisingly vulnerable. Well Realized Bad Ass!

What does Mike Martindale bring to the story that you wouldn’t experience if you just read the book?

His delivery is fantastic. I just thought Keiji should have probably sounded more japanese. It's a silly Knit PIck I know.

It had a bit of dark humor and like most war fiction had some very sad imagery.

This was my first Audible DL and I just want to say I'm very happy with Audible.com bringing me listening that I can't get anywhere else.

Good story - not so Hollywood

I can see how they made Edge of Tomorrow out of this book, and it’s a pretty good movie. The book has the same central idea, but it’s pretty different, and different in a pretty cool way. There are a couple of egregious pronunciation errors by the reader, but it’s a decent performance. It’s going a little surprising if you’ve seen the movie, and that’s a good thing.

Of all three versions

I loved the audio actor, but disliked the twists in plot. The manga was my first intro to the story which led me to the movie. I feel like the book held a closer resemblance to the manga, but the movie was the best version in my opinion. The effect of the ww3 Beach front invasion seemed to be lost in this version...

Just like Starship Troopers, the book All You Need is Kill is worlds different than its movie adaption. Both the Movies and books have phenomenal storys that are so different they can stand up on their own.

This story is one of my favorites, easily in my top 10 reading list. the emotions I felt reading it were incredibly intesne, the story short and to the point, the MC completely relatable and yes the whole story revolves around themes of love, hope, hatred and lost. A real emotional rollercoaster of a story. love it! bigly!

better than the movie

the original title was all you need is kill, and this is completely different from the film, and better for it.

I think the choice of reader might have been influenced too much by the heavily Americanized movie. Too gravelly to pass as the everyman Japanese soldier. Pronounciation of Japanese was atrocious, highlighting a poor casting choice and lack of background work. Despite these problems, the Japanese style shines through, laced with tropes instantly recognizable to friends of Japanese pop culture.

While Mike Martindale is an awesome reader and did a very good job, I would have liked a Japanese reader. Story was awesome as well.