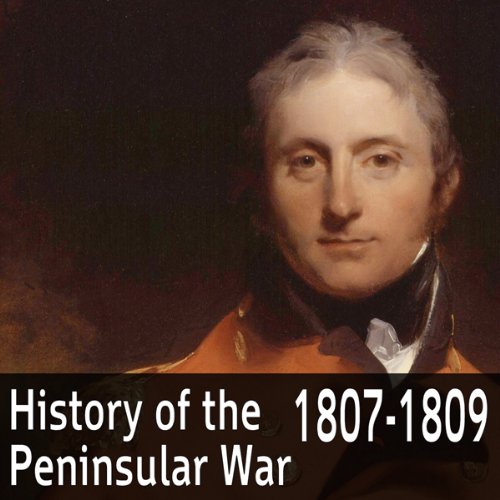 By: Charles Oman
Narrated by: Felbrigg Napoleon Herriot
Try for £0.00

FNH Audio presents a reading of Charles Oman's classic military history A History of the Peninsular War. In this first volume, a detailed examination is made of the first years of the war, 1807 to 1809. The campaign is examined from both sides using reference materials from British, French, Spanish, and Portuguese sources. This book covers the invasion of Spain and Napoleon's trickery in luring the Spanish crown into prison. It also features Wellington's first peninsular battle and of course the famous retreat to Corunna and the battle at that place.

This history, written many years after Napier's, draws its information from more first-hand accounts and corrects some of more glaring mistakes and biases of Napier. Although this audiobook is abridged, the only text removed is a number of the non-English sections of the Appendix, namely sections one, two, three, four, and seven. All English text from the appendices is present.

The worst narrator on audible

This reading is a disgrace, and is so poor a product that you have to wonder if Audible have considered basic quality control so that customers aren't ripped off.

It sounds like a bad Pete 'n' Dud sketch! Who is "Felbrigg Napoleon Herriot"? Presumably an nom de plume so that the man behind this appalling audiobook can escape the ire of his listeners. It's so bad you end up wondering if he is in fact the late Peter Cook playing a joke and reading a classic work of history in the voice of E.L. Wisty.

As others have noted he not only fails to pronounce foreign names with even a semblance of accuracy, but he can't even pronounce English. Hilariously, having mangled the French, he then pronounces the word "Catastrophe" as "Catas-troff" - thus, for once, giving the correct French pronunciation, only in the wrong place! There is a famous French cavalry commander called Lefebre Denouettes - and it's difficult to describe the car-crash that results from 'Herriot's" reading of this name. Not only that, he gives several different versions of the same name through the book.

One of the problems of Audible's rating system is that by giving 5 stars to the story, for example, the average might give the impression that the audiobook is worth considering. Oman is brilliant - but not in this reading!

A classic work I've longed to hear, absolutely mauled by incompetent narration. I could have wept. Even basic words like catastrophe were mispronounced. The tale is a magnificent work of late Victorian painstaking research. Oh, for a remake!

This is a great book and one that due to its extension and structure invites itself to an audiobook. A great classic.

It provides a real view of the situation in Spain, despite the regular drop of over-simplification of Spanish personalities, likely motivated by the Victorian (technically Edwardian) superiority complex to explain weak monarchs as only motivated by imbecility. Spanish governance had actually other severe problems as did the Portuguese at that moment - implying it was the monarchs and not a broader issue that placed both countries in ridiculous circumstances falls all too well in Oman's comtemporary narrative.

It is ludicrous that someone is retained - a very good narrator notwithstanding this particular point - that cannot pronunciate a single Spanish word correctly, considering War Histories mention location every 10 words, it is often unintelligible to understand what location or council or person is mentioned. You would expect that for such a task a narrator that can say "Guadala'h'ara". It is also funny how over time he improves, but in the first 2 hours are just hillarious.

Superb audiobook for those seeking knowledge of the Peninsular War. Very comprehensive, great value for your money.

Academic history at its best

This book is thorough and carefully researched.

The narrative is carried forward in a straightforward and lucid manner.

I am puzzled by some of the other listeners' comments. To begin with you can't expect to listen to a book of history without providing yourself with some maps and doing some basic research on the topic. If that's too hard you should be reading Bernard Cornwell. As for the reader, yes, he has an accent, one that I have heard before, but not in a narrator. It's not BBC standard. However I understood all the words and his voice is pleasant to listen to. I found the pronunciation more amusing than annoying.

Listeners should be aware the book was written a hundred years ago and many of the place names are not on current maps, or are differently spelled and sometimes differently pronounced. Also, the author was British and has a British point of view, although I would say he is fair and honest. There is much detailed description of military unit names and numbers present at certain times. It could all have been left out. Curiously, it has the effect of reinforcing the author's credibility. He did his homework.

Would you recommend A History of the Peninsular War 1807-1809 to your friends? Why or why not?

Battle of Balin and Moore's retreat.

This is probably an excellant book but it doesnt translate well into an audiobook. With the obvious removal of maps the casual listener has very little idea where many of these Spanish towns are located in relation to eachother. And therefore cant fully appreciate the hows and whys of military operations in Spain and Portugal.
Still it is an exhaustive, thourough, enjoyable book.

Wonderful if you can tolerate the reader

What made the experience of listening to A History of the Peninsular War 1807-1809 the most enjoyable?

If you could find someone to read the book who doesn't butcher the English language. It is cav-al-ry, not cav-ary and pam-plo-na, not pam-ploo-na. The reader continually mis-pronounces words and it is very annoying.

No way. Couldn't tolerate but a hour or so at a time of the reader, it was very painful at times.

Super book, be aware of this reader related to future purchases. Where is Robertson Dean or Michael Kramer when you need them?

No, because the reader's total inability to pronounce anything above third-grade vocabulary is extremely distracting. Also, it is a strange choice to have a book that takes place in Spain read by someone with absolutely no clue how to pronounce Spanish--it's so bad that you usually can't tell whom or where he is talking about. He can be funny, though: my favorite was when he rendered "suzerainty" (overlordship) as "super-zanity."

What other book might you compare A History of the Peninsular War 1807-1809 to and why?

"Marlborough, His Life and Times," read by a dyslexic 8-year-old.

Would you be willing to try another one of Felbrigg Napoleon Herriot’s performances?

Only if the alternative was to have my brains pulled out through my nose.

"Now on film, because you couldn't stand to listen to the audiobook."

A good book ruined by a bad reader. I want my money back.

Unfortunately impacted by the narrator's atrocious pronouncing of French names.
Is anybody reviewing these priductions before the audio release?

Very interesting, but the narration distracts

I have enjoyed exploring this part of the Napoleonic Wars. Charles Oman has provided a very thorough treatment of this fascinating period. I do not care at all for how Herriot pronounces names and places. While some of it can be put to me being American, that doesn't explain it all.

Landmark treatise that punches you in the ear.

Would you be willing to try another one of Felbrigg Napoleon Herriot’s performances?

Though I will listen to the rest of this series, I would NOT chose Mr. Herriot's reads due to the fact that he seems incapable of pronouncing much of his own language correctly (Cavalry pronounced with an L so soft it comes out as cavary) and what he does to both French and Spanish names would be comic if it was meant to be parody.

If you are interested in the Napoleonic wars, this book is a must. The only real negative is that without a printed copy, you will have a harder time following some of the movements and locations.

Unfortunately, this is a very dull book. FNH's narration is excellent as usual on this book. Unfortunately, the material itself is wanting. The narrative is constantly interrupted by a barrage of footnotes which do little or nothing for the casual listener and only makes the general flow of the history difficult to follow.