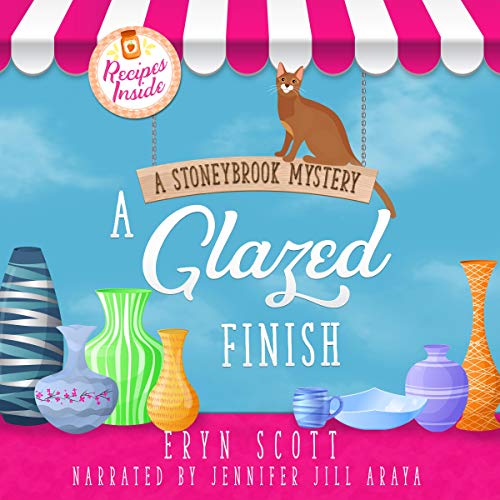 By: Eryn Scott
Narrated by: Jennifer Jill Araya
Try for £0.00

This type of mugging can be deadly.

The annual River Run is a fall favorite in Stoneybrook. Participants end the race win a commemorative mug from local potter, Josie Cobb. But when one of the mugs is shattered over Josie's ex-husband's head and he's found dead along the riverside trail, the sheriff is sure the potter finally snapped.

To make things worse, the dead man had flowers and an engagement ring with him, only months after the ink dried on his divorce to Josie.

Hadley cannot believe the generous local artist would do such a thing. Before the authorities make a huge mistake, Hadley has to prove Josie's innocence. This trail of clues is about to lead Hadley to uncover a big secret in her small town.

What listeners say about A Glazed Finish

This series has been surprisingly enjoyable, definitely in my top 5 for cozy mysteries. And that's from someone who tends to find the genre on the shallow side. But with this series I listened to all 6 in just a couple of days and would love to come back for a visit in the future.

Amazing Loved this book from start to finish great storyline
I was given this free review copy audiobook at my request and have voluntarily left this review.

I really enjoyed this book. I love the way the girls and boys compete against each other in order to prove there theory is the right one. This is the sixth book in series and I have enjoyed everyone, you don't need to be like me and have listened to them all to enjoy this one but it is such a fun light heart mystery series with romance, cas and good friendship that I recommend that you do. The mystery was good and I hadn't worked out who the killer was which is a bounces because it means there are plenty of suspects and twists. I look forward to the next instalment.
The residents of Stoneybrook are taking part in the annual river run but things come to a grinding halt when a dead on is found on the course. The man was dressed up, with flowers and a ring in his pocket but having only month's ago signed the divorce papers it is a huge shock because nobody even knew he was dating anyone. The ex wife Joise is the obvious suspect for the deputy especially as the murder weapon the first place pottery mug especially designed was created and made by Joise.
but Hadley thinks her brother is making a big mistake because that means there mother's best friend is a killer. In order to prove her innocent Hadley puts down her jam making equipment and starts her own investigation. Hadley starts at the dead man's office only to find that they had had a break in and once again all the evidence points to the ex wife. Hadley needs to prove somebody else had a very good reason to kill him and the opportunity. Can Hadley get to the bottom of it before her brother is forced into arresting Josie?
I liked the narrator she has such a distinct voice that she uses very well to bring the characters to life.
I was given this free review copy audiobook at my request and have voluntarily left this review.

I love this series. The characters are very lovable. this book kept wondering who the murderer was up until the end. I love the way there seems to be a cat rescue in each book being a cat lover, I recommend this book and this series. I was gifted this book in exchange for an honest review.

The narrator, Jennifer Jill Araya is fantastic. She does each character justice.

Good plot, the divorce papers, ink has quite dried, she is potter, and one of her mugs did the Ex in. Sounds suspicious and Hadley goes to proves Josie is innocence. Given audio for my voluntary review and my honest opinion is

Enjoying this series. Narrator does s great job. This is a small community where the main character's twin brother is a deputy. His sister and her friends get involved in helping investigating. The sheriff is always ready to arrest the obvious suspect to close the case. In this case, the most likely suspect is the victim's ex. This story had logical progression in the investigation. I find it relaxing to listen to the story unfold. These are clean light cozy mysteries. There is always a cat to rescue and the jam recipes make me want to try my hand at preserves.

Loved this one!! Great mystery and totally didn’t expect the ending. Hadley and Luke are great and can’t wait to see what happens with them. Love the recipes at the end

Completely in love with this series. Eryn Scott please write faster(LOL). Looking forward to the next in the series. I loved how the main character, Hadley, has grown so much. Great job by the narrator.

One of my favorite series

I love how Hadley always seems to find trouble! I love that she has a twin. And, I'm glad that her and Luke finally got together in the previous book. This author really knows her stuff and writes really great cozy mysteries. I love how the narrator brings the characters to life and sounds like she's having fun doing it! I was given this free review copy audiobook at my request and have voluntarily left this review.

A Glazed Finish is a great example of a cozy mystery and one that I found thoroughly entertaining; I loved this book from start to finish and was riveted as I followed the clues trying to guess the murderer before Hadley and her brother and friends.

Narrator Jennifer Jill Araya as really brought these books to life for me and did a fabulous job keeping me entertained. This was a a book filled with a lot of secrets and the intrigue and suspense kept me riveted as I listened to this story.
I was given this free review copy of this audio book at my request and have voluntarily left this review.

Well, I did not see that coming. A Glazed Finish was one of those rare times when I was totally surprised by whodunit. Eryn Scott had her characters, and most definitely me, coming and going in such a way that I didn't see what was right in front of my nose. I couldn't have been more wrong in who I suspected. But, oh, that was such a great part of the fun of listening to sixth A Stoneybrook Mystery audiobook!

I've really been enjoying the A Stoneybrook Mystery series as I am a big fan of clean reads, especially of the cozy mystery variety. It's been so much fun solving mysteries with Hadley and clan. Watching their relationships change and grow, and in the last few books getting to know Hadley's spunky grandmother. So, if who like to figure out whodunit, love cats, and have a sweet tooth for jams and jellies you've got to check out A Glazed Finish, and the rest of the series, from Eryn Scott.

Once again, listening to this audiobook was a real treat! Absolutely no complaints at all! I love the narrator for the role and was glad to hear that she was back for this audiobook. Great listening!

(I received a copy of this book from the author/publisher. All opinions are entirely my own.)

Excellent "Who dun it?" mystery book

This was a excellent clean mystery novel that kept you guessing about the real killer and why he killed his friend.

An excellently done audiobook as well!

Hadley was actually caught up by danger...

I may have been in the wrong mood, or it might have been too soon after finishing (and loving, I might add) A Juicy Murder, but I felt that A Glazed Finish didn't really do it for me. It seemed like Eryn Scott was just coasting with this one. Yes, the backdrop of the scenic Cascade Mountains and river is awesome, and the townsfolk are still quirky, and always ready to pass along some juicy bit of gossip. There's plenty more kittens to save and a murder to solve. I kinda' felt like nodding off, except that Hadley actually got caught up in some danger, and the story started to suck me in
Jennifer Jill Araya's voice performance is perfect. She's never failed to enthrall me in the tempo, rise and fall, and timbre of her narration! Of course, you know you'll need to listen all the way to the end to get the recipes for Maple/Bourbon Apple-butter and the Pumpkin-butter too, both of which sound delicious!