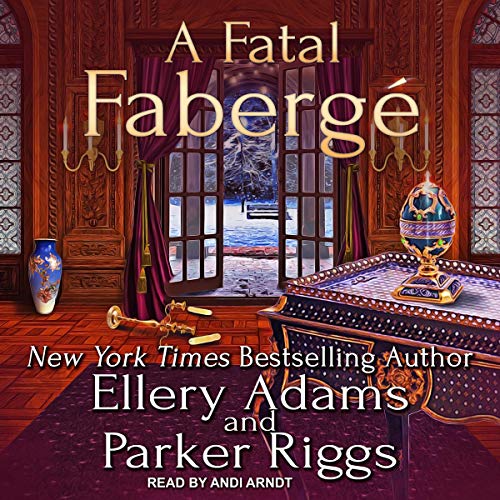 In the grips of a cold and drab autumn, Collector's Weekly reporter Molly Appleby is thrilled to be attending a festive black-tie fundraiser hosted by the very private Natasha Gordon, an heiress known for her charitable events and aversion to the limelight.

It's Molly first chance to see the stunning interior of the Gordon estate, but when a rare book dealer is pushed from a high window to his death, she's confronted with a sight that's become all too common for her. And despite the fact that the crude and pompous victim was roundly disliked by all who knew him and that any number of people may have wanted him dead, Molly agrees to look into the murder for his surviving son.

As the police go about their steady business of interviewing the dozens of people in attendance that night, Molly decides to look closer to home and begins questioning the staff and anyone else connected to the estate and the victim. More and more stories of the dead man's troubled life and marriage begin to emerge, including a potentially lucrative deal that's gone bust and an old Gordon family heirloom that's gone missing - a rare jeweled Faberge egg once owned by the Empress Alexandra of Russia.

When clues to the murderer's identity begin to accumulate, so too do the threats to Molly, and she knows she's getting close to the truth.

What listeners say about A Fatal Fabergé

An EGGstravagant Tale of Murder and Greed

I've listened to almost all of the books in this series and haven't ran across a bad one yet. This one was very interesting to me, as a retired museum administrator. I am always amazed at where the stories lead, and was just as surprised as this one unfolded. I love hearing about Molly, her husband and little son, Tyler, as well as other regulars in the series. I particularly LOVE that Molly isn't a size 0 and enjoys her food. 😊 As Molly tries to determine who shoved the rare book dealer out the upstairs window and where the missing Faberge egg went, there appears to be no shortage of suspects, as the man was about as vile as they come. What a fun addition to the series with an excellent resolution, well worth the wait.

I love this series. Fatal Faberge is an entertaing addition to an entertaining and intersting cozy mystery series. I love this group of characters and always enjoy how they support Molly as she solves the murder. I also like the infusion of history into the story, although there wasn't a lot of that in this story. I look forward to the next one.