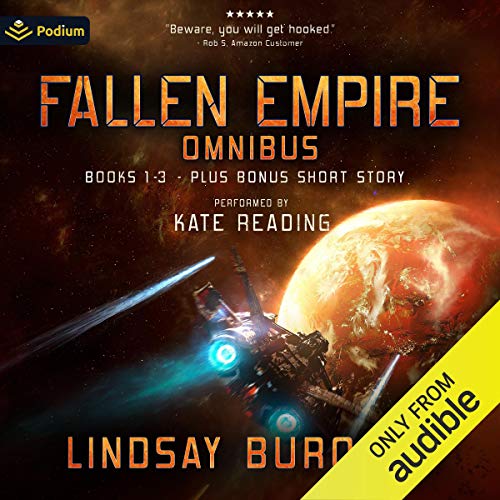 By: Lindsay Buroker
Narrated by: Kate Reading
Try for £0.00

A fighter pilot on a mission to reunite with her daughter. A cyborg soldier on a quest to regain his humanity.

Mortal enemies during the war, they must now work together to salvage a 70-year-old freighter and navigate the gauntlet of pirates, scavengers, mercenaries, and other pitfalls that stand in their way after the fall of the largest empire mankind has ever known.

Star Nomad was a nominee for the Goodreads Readers' Choice Awards and also made Amazon's Top 20 list of Best Science Fiction and Fantasy of 2016. Start the adventure now!

What listeners say about A Fallen Empire Omnibus

good books, very easy to listen to and follow the plot. if it was not an omnibus, I guess the individual books may have been of somewhat lower content/price ratio against similar titles, but as it is - very good listening for not very much money.

Interesting characters and fun story set in a universe with a lot of tensions. It is enjoyable with a lot of humor. Quite a few things remind me of the TV show Firefly, which in my opinion is a very good thing.

Picked this up mostly because it's read by Kate Reading to be honest, and I was in the mood for a scifi.
I am completely sold now and will definitely continue this series and look into other books by Buroker.

I am now 6 books in and I just wanted to come back and review this series - its great and I see my self buying all the books in the series eventually.

This series reminds me of "The Emperor's edge" series by Lindsay (only the best steam punk series of all time) which was available as an iTunes podcast for free - I never understood why the whole series isn't available in an audio format but there you go...
- exciting locations
- clever escapes
- larger political plot

I think I love all the dialogue between Alisa and the engineer its sass on sass and therefore just awesome.

Great storey telling and naration is excellent. the I'll be buying the rest of the series.

The main problem with this book was that a number of plot twists were recognisable from other books/films of the same genre - which loses the originality feel. Other than that the characters were fine and it is a lighthearted listen,

This series has been amazing i really knew all the characters and the story kept me enthralled all the way through. Well written and very well read.

Thank you both for the pleasure of this series

The story treads a well worn path but it is well written, entertaining, humorous and I enjoyed the performance from the nurater.

A nice twist to standard SciFi

Nice to have sci- fi seen from a female perspective. The narrator brings all the different characters to life with great skill, really enjoyed listening.

Loved it, the story was gripping and the narrator read it well. Most enjoyable listen

Fast moving and fun. A perfect audio book for the background when you're in the garden

Fantastic space opera. I love the protagonists. Lots of action and a little romance thrown in. Alisa, the fighter pilot of the Alliance and Leonidas, the cyborg colonel of the empire had to work together to get to their goals. Along the way they have to escape from their enemies. A very well written series with witty dialogue , intrigues and politics in the mix. A boxed set of 3 books is really worth the credit. I will be continuing book 4 and I hope book 5 will come out soon.

This omnibus contains books 1-3, plus book 2’s epilogue is a 1.5 hr novella. Moreover, there’s a prequel and a novella labeled book 1.5 currently free in Audible Plus. That’s 3 books and 3 novellas for 1 credit.

The series itself falls between (shiny) Firefly and (comicky) Space Team. This feels very YA, delivering only redshirt death and largely bloodless violence. Indeed, much of this story is lacking in detail or depth. If you want vivid descriptions of characters, plot, or tech, you’ll be disappointed. For example, Leonidis is a cyborg, yet after three books I still have no idea if he has small metal bits like Borg Seven of Nine or has majority metal limbs like Cyborg in Teen Titans.

Still, if you color inside the broad brushstrokes, it’s fun to see the formation of a Firefly-lite kind of family amid the cargo ship Nomad. There’s snark and adventure enough to give good matinee listening.

Few stories have everything. This does.

I enjoyed everything about this series and hope for more. I love the captain snd care deeply for the motley crew. Three cheers for a continuing adventure.

Way too much snark

There aren’t any characters in this book that I would care to spend any time with: 1) a captain who who can’t resist any inopportune moment for lame snark 2) a talented ship’s engineer who oozes negativity 3) an airhead security officer/cook 4) a secretive passenger whom the captain has overheard suggest her murder, still she keeps him aboard 5) a sullen, dangerous, enemy, cyborg passenger on a personal quest, the nature of which, remains unrevealed by the end of book three. 6) an airhead passenger who is into drugs,meditation, and chickens.

I’m curious, but not enough to continue.

The story was enjoyable, but the narrator’s style is weird, like she’s not fully aware of what she’s actually reading.

Great character development, good movement and adventure in the plot. In the selection of narrator? Superb!

A writer worth reading, excellent narrator

I had not found a lot of women SciFi authors I liked since Andre Norton changed her focus. I know they are out there and I may have been lazy looking for them. Buroker has created interesting characters, a solid plot line and set the hook for me wanting to see where the adventure goes. It may have gone a bit far with what the character calls "inappropriate" jokes but that is coming from myself who jokes at inappropriate times. I suspect I'll buy the series. I don't think she will let me down.

Disappointed by the Crude Humor

I like clean science fiction and had high hopes for this author based on other reviews. Unfortunately, this has a lot of crude humor. Don't get this book if you are looking for clean literature.

I blame this for why I fell behind in work

One of the absolute best stories I've listened to in years. Rich character, intriguing plot, witty banter, and unpredictability at every turn. I truly hope the next omnibus is available or I will have to start this again.

Be patient! This is a little slow to start but the characters are great and the adventure is epic. The narrator a mostly perfect although she mispronounces a few words which can be haaard.