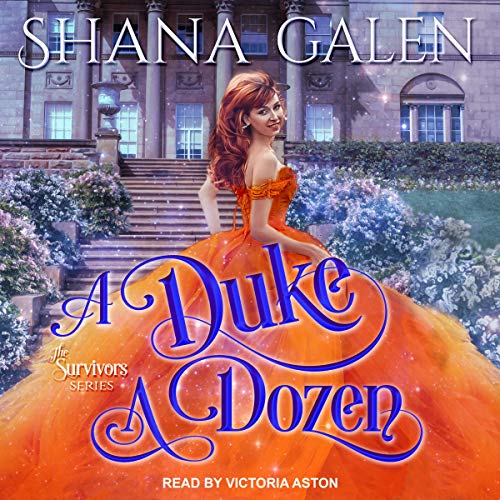 A Duke a Dozen

By: Shana Galen
Narrated by: Victoria Aston
Try for £0.00

Phineas Duncombe, ninth duke of Mayne, should not be the duke. After all, he had four - count them - four older brothers! Phin never wanted the dukedom, and the suspicious circumstances of the eighth duke's death lead Phin to question the countess of Longstowe. The beautiful widow isn't at all what Phin expected. He's intrigued by her and determined to seduce her. The countess is not interested in Phin romantically, but when she comes to him with another request, he can't deny it. A few days in the country with Lady Longstowe reveal two truths to the new duke. One, he cares for the countess much more than any other woman he's ever known. Two, Phin either has very bad luck or someone is trying to kill him.

Annabel was barely 18 when she was married to the elderly earl of Longstowe. A harsh, sadistic man, the earl's death was not something Annabel mourned. Now in her mid-40s, Annabel enjoys her widowhood and has no desire to ever be under a man's thumb again. Not even a handsome duke like Mayne, who is far too young for her anyway. Annabel's one desire is to find the daughter who was taken away from her. For that she needs a man with power and status. She needs the duke of Mayne. When the two are thrust together, Annabel struggles to fight her attraction to the charming Phin.

What listeners say about A Duke a Dozen

Least Favorite of the Series

The B romance plot between the housekeeper and valet was much more interesting than the main couple. I found the dialog and relationship between the main couple very awkward. I really enjoyed listening to the other books in this series, but this is a pass for me.

Really enjoying this entire series. Can't wait for the next one. The narrator was good. Love scenes a little steamy but I like my romance books like that...makes it interesting.