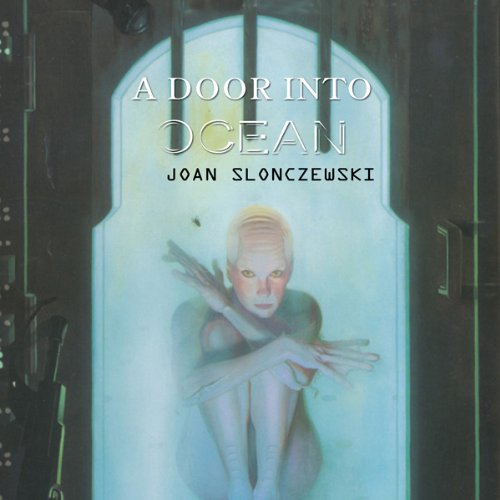 A Door into Ocean

The Sharers of Shora are a nation of women on a distant moon in the far future. They are pacifists, they are highly advanced in biological sciences, and they reproduce by parthenogenesis - because there are no males. Conflict erupts when a militaristic neighboring civilization decides to develop their ocean world and sends in an army.

A groundbreaking work both of feminist science fiction and of world-building hard science fiction, A Door into Ocean is the novel that made Joan Slonczewski's reputation as an important science-fiction writer.

"[A] dreamy, poetic book...very much in the spirit of Dune or Le Guin's works. It's tough to build a world, particularly if you try to get the science correct. Author Slonczewski accomplishes that difficult feat and manages a gripping plot into the bargain. Maybe LeGuin has competition." ( San Francisco Examiner)

What listeners say about A Door into Ocean

This is a book that, in my opinion, does not show its age. It could have been published last week,

Two inhabited moons with very different cultures are part of a larger galactic empire, and increasing contact with the empire is causing its own strains. The more industrialized, military-inclined culture of Valendon wants to exploit the resources of Shora, a world virtually without land.

The Shorans have different ideas.

The are peaceful, cooperative, and communal. They are also all female. The reasons for this and its significance become clear as the story progresses, and it's the source of much of the conflict in the story.

Shora isn't the simplistic paradise it may appear on the surface. The Shorans, who call themselves Sharers, are doing a lot more than is visible at a casual glance, and two gender-determined cultures are anything but. The storyline of the young man, Sinel, rejects the whole idea that the traits the Sharers value might be gender-determined rather than cultural.

This isn't a fast-paced action story. It's thoughtful, deliberate, and fascinating. with characters who are interesting, complex, and unfolded with skill. The world-building is indirect yet convincing.

This was a very interesting book, reminding me of some of Sherri Tepper's works. This book outlines a conflict between a patriarchal military culture and a water world populated by women whose technology is biologically based. The book moves slowly, but as I kept listening I was drawn into the story of how these two cultures interact.

What did you love best about A Door into Ocean?

The vivid writing brought me right through

The narrator did an amazing job conveying the peaceful feeling of Shora and the peaceful beliefs of the sharers.

I gave the story 4 out of 5 stars only because there was all this build up to a climax that was not very climactic.

One of my top 5 books

This is one of my favorite scifi books of all time. It's a must read for feminists and queer folks, as it envisions a world that centers on queer women. The book explores how such a world would come to integrate with a literal Patriarchy.
Don't believe the butthurt, sexist male reviewers. The story had almost as many male characters as female. All the characters are complex and well written. (Men of quality dont fear equality). There's something here for everyone.

I got this cause it was a water world and because it is a prequel to Brain Plague. I did not realize it was a feminist book. Before you get all emotional on me, that is exactly what it says in most summaries of the book. There are even insects who gossip. Had I know it was a feminist book, I might have still bought it. Had I had read the reviews and know it moves slower then molasses, I would not have.

WHO RULES WITHOUT BEING RULED
This is a water world without men. They are pacifists and blame men for war and the ruin of most planets. They live in a commune, where money is worthless. If anybody wants or needs something they will just give it to them. They run around naked, but they don't have sex. They do not drink liquor. Shaving themselves seems to be there biggest joy.

SHE CLOSED HER EYES SAVORING THE SALT OF HIS TONGUE

Joan is a biology teacher in college and she does come up with an interesting world. The prose is excellent, it is good writing, word wise. The story is just not good enough to hold my attention for 18 hours. It reads kind of like a romance novel without the romance. Everybody wanted to know how everybody else feels about this that and the other thing. Some women may like this a lot. Women seem to want to know how you feel and men want to know what you think. I am not passing judgement on which is better just making an observation.

The narrator is very laid back. She reminded me of Saturday Night Live, when they spoof NPR. This mostly likely represents the mood of the book as it is written.

A good water world book with lots of crazy biology and lots more action would be Skinner, by Neal Asher.

Highly imaginative story interspersed with the philosophy of life, love, and control. A bit too many characters with odd names to keep track of. Reader good with dialogue but otherwise, monotone.

Joan Slonczewski's A Door into Ocean is a tale of an ocean planet, Shora, populated by women who become the focus of an invasion effort by an authoritarian multi-planetary empire. The native population of Shora possesses an advanced civilization whose technology is exclusively biological. They are also pacifist in nature and exhibit an egalitarian political structure. The invasion force is quite stereotypical and becomes stymied by their inability to subjugate the natives.

While the basic plot is quite traditional: a native population overcoming a more powerful outside entity that is intent on total subjugation by peaceful means, the underlying premise falls short on several accounts. Shora is a total water world which means the human female population must have migrated to that world at some point in the distant past implying they have a history, but this never seems to manifest in terms of their understanding of their opponents. In addition, they have conveniently managed to adapt biological mechanisms for every form of advanced technology: insects are use as digital storage devices; fish become long distance communication; and plants supply all medical needs including vines that conduct microsurgery. At the same time, they are dedicated to living in harmony with all the rest of the life on Shora up to the point of tolerating species that kill them to maintain balance. On the other hand, they are constantly introducing genetically engineered lifeforms into the environment without any negative consequence; they are perfect in that their technology never has a downside. Also, they have managed to also learn about quantum mechanics without even having a grasp of the periodic table. Their world is reminiscent of the Flintstones with water replacing rocks. Probably, the most frustrating aspect of the story is that the all the major players on both sides seem totally incapable of even the barest understanding of what the other side is thinking. Lastly, the overuse of "sharing" which is the term for any interaction between two people becomes annoying.

The narration is adequate, although character distinction is minimal and pacing drags a bit.

This book maintains an interesting tension between a new take on war and colonialism that shows how radical pacifism can wear down even the most militaristic society, and yet another noble savage and mystical magical moon women trope-fest in which the life-sciences gifted race of women manage to enlighten just a few individuals raised under a male regime of power. The story raises so many questions about the larger galactic society outside the double planets of the main characters. I would read more in this universe or by this author.

long story but very interesting premise. I would highly recommend to anyone that is looking for a positive view of female dominated society especially in contrast to patriarchy

Readers voice is so hypnotic and emotionally flat that it is hard to follow the story. She has a beautiful voice but she needs to use it better. I can't stay awake.