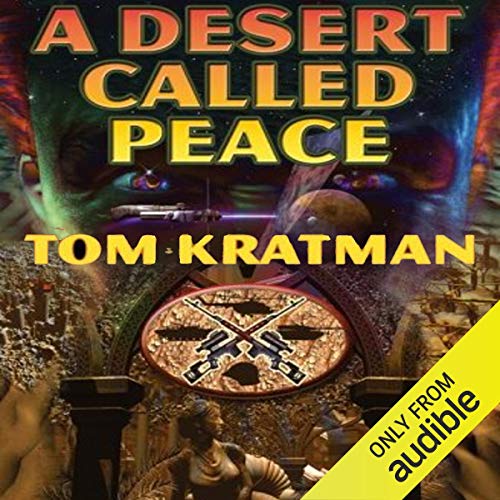 By: Tom Kratman
Narrated by: James Fouhey
Try for £0.00

He raised an army against those who took everything from him.

They should have picked their enemies more carefully. Five centuries from now, on a remarkably Earthlike planet that is mankind's sole colony in space, religious fanatics called the "Salafi Ikhwan" have murdered the uncle of former colonel Patrick Hennessey. That was their first mistake, because uncle was rich and Hennessey was rather a good colonel. But they also murdered Hennessey's wife, Linda, and their three small children, and that was their worst mistake for she was the only restraint Hennessey had ever accepted. From the pile of rubble and the pillar of fire that mark the last resting place of Linda Hennessey and her children arises a new warrior - Carrera, scourge of the Salafis. He will forge an army of ruthless fanatics from the decrepit remains of failed state's military. He will wage war across half a world. He will find those who killed his family. He will destroy them, and those who support them, utterly, completely, without restraint or remorse. Only when he is finished will there be peace: the peace of an empty wind as it blows across a desert strewn with the bones of Carrera's enemies.

What listeners say about A Desert Called Peace

This is a scify/alternate history retelling of our recent history on a new planet. There are two points that makes this book stand out.

1. The author obviously knows a lot about military leadership and organizing troops. His descriptions of this is very interesting and engaging.

2. The author is probably very right wing and seems incapable of understanding liberal thinking. Whenever he tries to introduce a liberal bad guy it seems more like a straw man, to take pot shots at, instead of a real person.

All in all I think it is a rather well written book, but some people will just want to trow it out the window whenever they start talking politics.

Took a chance on this one being I was not familar with the author. Overall this was very enjoyable. I will grant that the writer used events from our real world history in the plot but that is okay. What he did with them is what matters. Am looking forward to the next installment in the series.

Not Bad, But Caveat Emptor

This is a great book if you can get past the political rhetoric and somewhat grisly details of modern intelligence gathering in asymmetrical warfare. Frankly, if you are even centre-right politically you might find this book hard to listen to. By the same token, if you are conservative this book makes pretty solid arguments. The narration left a little bit to be desired: pronunciations were somewhat lacking on several of the Spanish terms used, and some of the Arabic pronunciation made me cringe, but overall it was pretty good in terms of narration. Make your own decision, and buyer beware, but if you're somewhere to the right of Bob Dole you'll enjoy the book, I think.

This book is by and large one big retelling of the entire "War on Terror." It takes the "those unable to learn the lessons of history" cliche to new heights. In the future on a colony of earth most of the 18th-20th century history is repeated almost event for event. Our story really starts just before a major terrorist attack which is a pretty faithful and slightly disturbing recreation of the 9/11 attacks. Then events proceed from there. There is a certain level of dissonance, because these colonist have access to earth history up to around 2050. Yet they somehow fail to note any similarities. However despite this it does become a rather interesting story of revenge and psychological turmoil. It also has some interesting things to say about human nature and the nature of religion. I don't agree with all or most of its points but it is an interesting perspective.

Overall fairly well written and plotted with some holes that one can ignore.

The narrator does a fine job and I look forward to some more of his work in the future.

He took our present day and moved it to a place far far away but with our same problems.

What did you love best about A Desert Called Peace?

If you are interested in the adventures of a very realistic and effective military antihero, this is the series for you.Fair warning: the attitudes evinced by the characters in this book are strongly NOT politically correct and contain strong elements of nationalism, chauvinism and situational morality.On the plus side, it's clear that Kratman has thought deeply about the issues he fictionalizes and his point of view is clear and powerfully pragmatic. In addition, anyone who pays as much homage to Heinlein's "Starship Troopers" as he does can't be all bad. (He even has two of his characters author a work based on Heinlein's fictional "History and Moral Philosophy" and presents extensive quotes from their fictional writings.)

What other book might you compare A Desert Called Peace to and why?

Unfortunately, James Fouhey is a TERRIBLE narrator. He mispronounces any number of words, leaves odd and confusing pauses between words. He also allows his voice volume level to drop to nearly inaudible when voicing characters' thoughts. This makes listening in a vehicle difficult because you're having to repeatedly mess with the volume in order to hear.James Fouhey also has a poor tone of voice for some of the characters -- for example, making the incredibly strong, mature main character sound like a college kid.Taken together, these issues significantly detract from the book.

I hated the first book, not because it was badly written, but because the main character is so brutal and makes many decisions that are difficult to respect, even given his motivations.

I wound up listening to all the books trying to understand WHY Kratman wrote these books and what his message was, especially since it seemed clear that he was ambivalent at best about his main character. I wound up enjoying the military details and treating it as an essay on "how it should be done" with plot and character elements largely window-dressing along with an exercise in profiling a complex, harsh, relatively unlikeable but nonetheless powerful character.

For contrast, compare his attitude towards Patricio Carrera throughout the books with the way he writes about the Fuentes character in "Legion Amazonia", his strongest book. Legion Amazonia is an interesting and compelling book despite (or perhaps because of) the awkwardness he didn't manage to overcome when he was writing about women in general and gay and lesbian soldiers in particular from an external perspective.

Without knowing any of Kratman's history beyond what little bio is available on the internet, it feels like he's drawing on his personal experiences as a comrade and commander of such soldiers since the parts where he's writing about their internal feelings and motivation rings hollow, while his discussions of the practical matters of training, leading and organizing female and LGBT troops smack fascinatingly of reality and experience.

It's pretty apparent that though set in a Science Fiction universe, this series is STRONGLY rooted in Kratman's time in Panama and can be read as a fictionalized extrapolation of his experiences there.

Would you listen to A Desert Called Peace again? Why?

I would listen to this again. Though it may be some time before I do. The part where the main character's wife and children die struck me very hard. I remember watching 9/11 and seeing people make that terrible choice of jumping or burning alive. That moment stayed with me, and that scene in the book brought it all back.
While listening to this book keep that scene in you mind and you will understand the main characters motives.

Mac. Every good leader has a right hand man.

Did James Fouhey do a good job differentiating all the characters? How?

Most of the main character's voices were easily distinguishable. This book has a large cast of characters so some of the secondary characters sounded somewhat the same.

The most dangerous man is one who has nothing to lose.

I only got this book because a friend pestered me into getting it. I didn't expect to like this book. After the first few chapters I started to warm up to the story, by the middle I was hooked.

I reccomend this book to anyone loving freedom.

the story of a fight against the enemies of freedom on another world.

The author draws you in as a third person observer throughout the entire book. I can hardly wait listen to the next book.

Well constructed, very interesting, strong characters. very well read by the narrator. Gonna get the next one.

Takes a while to get into it but quite good.

This book uses a 'new' earth as a analog for today's problems. I really do like this book. It takes a bit to get a handle on the story but once you do it's pretty good.

The author does skip around a bit and some parts of the story just sort of end but overall it's a good book and it's nice and long instead of splitting it into smaller books just to earn a few more bucks is nice.