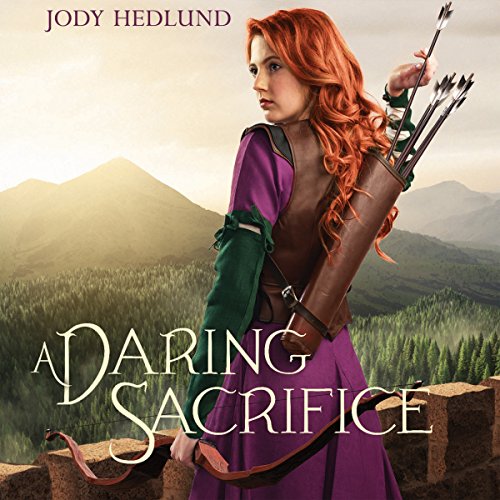 By: Jody Hedlund
Narrated by: Hayley Cresswell
Try for £0.00

A reverse twist on the Robin Hood story filled with romance, adventure, twists, and turns, a treat for all fans of historical fiction and medieval stories, featuring a strong female character who can kick butt in a cloak.

For three years, the Cloaked Bandit has terrorized Wessex, robbing the nobility by knifepoint and a well-placed arrow. But little does anyone know, this bandit is in fact Juliana Wessex, the rightful ruler of the land, and a girl her tyrannical uncle - the current Lord Wessex - believes was killed along with father.

Juliana has become skilled at hiding from Lord Wessex in the forest, using her stolen goods to provide food and shelter to the peasants her uncle has taxed into poverty. But when she robs Collin Goodrich, her red hair betrays her true identity. Lord Collin remembers Juliana from their childhood - and challenges her to stay on his estate for a week in hopes she will leave her thieving ways and become a proper lady once more. Juliana is intrigued by Collin and his charms, but only time will tell if he can overcome her distaste of the nobility - as well as win her heart.

What listeners say about A Daring Sacrifice

Would you ever listen to anything by Jody Hedlund again?

I think she should stick to books set in America, and not the Middle Ages, as she doesn't sem familar with the period, or its history law and culture.

Not bad, but Narrating a very silly book.

Do you think A Daring Sacrifice needs a follow-up book? Why or why not?

No especially, if its going to be like this.


I had concerns about this book before even picking it up. In a way, I think my response reflects what I thought of the last one. It had the grain of a good story and content- but sadly this was surrounded by a hard shell of silliness and dross. There were some important messages about redemptive love and overcoming selfishness and bitterness. The thing was even enjoyable in places, but once again there were too many negatives.
The heroine Julianna seemed rather too goody-goody, and her irrational prejudice against the nobility did nothing to endear her to me (her Uncle deposed her father, therefore all nobles are evil and corrupt). Admittedly, she did realise that her view was unreasonable in the end, but I think she could have taken a more sensible course of action a lot more quickly- and less pontificating at the start would have been helpful. It just made her seem annoying.

Still, I guess without her unwise choices there wouldn’t be a story. Sir Colin was altogether more interesting, and a little more fun. The Romance- often mushy, and a little cheesy, but not entirely unappealing.
The modern phrases and Americanisms in the characters speech were hard to ignore- a perpetual annoyance at disparity with the setting. Like no effort was made to make it authentic whatsoever, with terms like ‘pulling a stunt’, ‘spunky’, and calling the season of autumn ‘fall’. The outlaws, in forest dwelling movie-type style, use a bird call to communicate- the only problem is that in their case, it’s a blue jay. A species indigenous to the Americas, not found in Europe, and not in Medieval Europe. Really, I do think that the author is not as familiar with the setting as she is with that of other books set in America or Canada- and it showed in a lot of places.
This was not the only way in which historical accuracy or credibility was lacking. Towards the end the whole thing resembled a collection of silly myths and tropes about the period involving torture and horrible punishments. Yup, like in the last book there seems to be an unhealthy obsession with it- so Julianna’s wicked Uncle (your fairly typical cardboard cut-out type villain) naturally has his own torture chamber in his castle complete with thumbscrews and other diabolical instruments that you see in movies (so it must be true- right?).
The worst part though was when he wanted to have Julianna burned at the stake- for stealing. Seriously, that has to have been one of the worst travesties against historical truth I have ever encountered in fiction. Now it may be argued, people were burned at the stake in the Middle- Ages. Yeah- for heresy- and maybe High Treason- not shooting squirrels- and it was nowhere near as common as Hollywood makes out.
For the record, Hanging drawing and quartering was only ever a punishment for Treason too. All one can ask is why? It’s like the most extreme punishments ever devised in history have been found, and applied to the most trivial offences imaginable for the sole purpose of shocking the audience and creating drama.

Now it might be argued that I’m over analysing, and that the story is ‘meant to be a fairy tale. That may well be, although some of the place names, such as Wessex, Windsor and Maidstone are names of real places in England- regions or towns and cities.
Really it’s the principle of it. I can accept a certain degree of inaccuracy- but it saddens me that ‘Medieval’ fiction seems to be a licence to include references to unnecessary acts of violence and abuse- to depict all of the pre-American past as some quagmire of violence as lawlessness.
It’s also that some are liable to take what they read in books like this as a true and factual representation of past reality. Judging by one review I saw, some people are already.

The whole thing overall just seemed sloppy. A bit like a rip-off of various Robin Hood movies, and other girl outlaw spin-offs with the odd original scene or incident, but not a lot to distinguish it from others except the torture (not a good thing). As YA Medieval Romantic Fiction goes, I prefer Melanie Dickerson and Dina Sleiman’s Dauntless- which is in a similar vein. I almost got the impression that perhaps not as much care was taken over this series as other titles by the same author- that perhaps it was churned out in something of a hurry to cater for popular demand.

This is a great story! Very well written, enjoyable, adventurous, clean! I was able to listen to this story with my daughter who is 10. It is a female Robin Hood type story that is so fun to listen to. The plot had many unexpected twist and turns with a ending that was so beautiful and worth waiting for!

My only negative would be that the book is not read with an accent that is fitting to the time and location.
The narrator does a nice job, has a pleasant voice, but it is sometimes hard to realize when she has switched from one main character to the other.

Loved The Characters! This is a great read, lots of noble and honorable characters!

well narrated and well written. but i found the violence to be more graphic than i like. i found myself skipping parts. but that tells how well written the story is.

I really enjoyed this story! I know on audible it says that it's a children's book (????), but it's a clean romance. It had parallels to what Christ did for us. The woman who read the story read it in such a way that it sounded like a children's story, but there was a lot of kissing and shooting of arrows (and description of killing) for it to be a book for the age that her voice seemed to imply. Don't get the wrong idea, it was a perfectly clean story, and not bad at all, just not suited for 7 year olds or something.