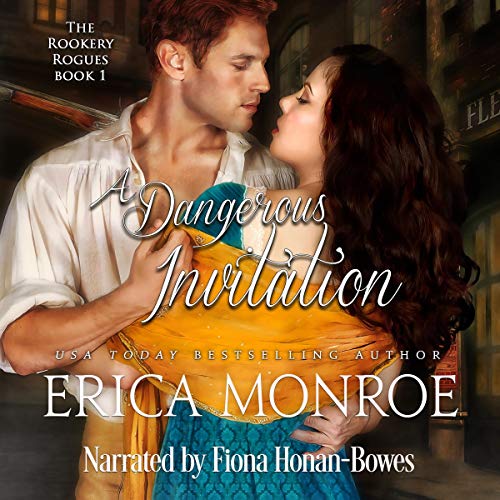 By: Erica Monroe
Narrated by: Fiona Honan-Bowes
Try for £0.00

Scoundrels, thieves, and rebels inhabit the rookeries - where dangerous men fall in love with fierce women.

She's given up on love, and wants only independence...

Torn from her life of privilege by her father's death, Kate Morgan survives in London's dark and depraved rookeries as a fence for stolen goods. The last man she ever expects, or wants, to be reunited with is her first love, who promised to cherish, honor and protect her, and instead fled amidst accusations of murder.

He's the reformed rake determined to win her back.

One drunken night cost Daniel O'Reilly the woman he loved. If he ever wants to reclaim Kate--and his old life--he'll not only have to prove he's innocent of murder, but convince the pistol-wielding hellion that he's no longer the scoundrel he once was.

Together, they'll have to face a killer. Time is running out...

A Dangerous Invitation is a dark, gritty, and sexy romantic suspense about the working class of pre-Victorian England. It is a full-length standalone historical romance, and is book one in the Rookery Rogues series.

What listeners say about A Dangerous Invitation

Not my usual genre

This is not my usual genre but after a recommendation I thought I would give it a try. So glad I did, a great Regency story with true grit and intrigue. It gets your interest straight away and holds it to the end. You are shown the other side of Regency life, away from the balls and privilege. I have heard this narrator before and she never fails to bring a story to life. A good story and a first class narrator - a winning combination.

Fiona was great. I felt like she loved reading this story as much as I loved listening. It really added to the tension. I will be listening to this again and looking for the Gentleman Thief's story.

A little too much angst & confusing story

H/H are too filled with angst and for good reason. I am 1/3 of the way through, but don't have any interest in finishing as the H/H are not likeable and I don't care about them