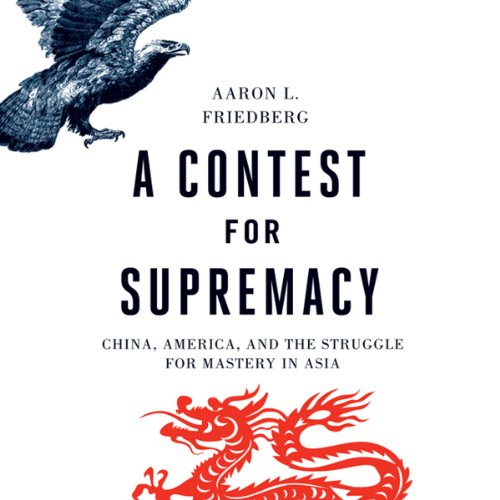 A Contest for Supremacy

By: Aaron L. Friedberg
Narrated by: Michael Scherer
Try for £0.00

Despite its impressive size and population, economic vitality, and drive to upgrade its military, China remains a vulnerable nation surrounded by powerful rivals and potential foes. Understanding China's foreign policy means fully appreciating these geostrategic challenges, which persist even as the country gains increasing influence over its neighbors. Andrew J. Nathan and Andrew Scobell analyze China's security concerns on four fronts: at home, with its immediate neighbors, in surrounding regional systems, and in the world beyond Asia. By illuminating the issues driving Chinese policy, they offer a new perspective on the country's rise and a strategy for balancing Chinese and American interests in Asia.

Though rooted in the present, Nathan and Scobell's study makes ample use of the past, reaching back into history to illuminate the people and institutions shaping Chinese strategy today. They also examine Chinese views of the United States; explain why China is so concerned about Japan; and uncover China's interests in such problematic countries as North Korea, Iran, and the Sudan. The authors probe recent troubles in Tibet and Xinjiang and explore their links to forces beyond China's borders. They consider the tactics deployed by mainland China and Taiwan, as Taiwan seeks to maintain autonomy in the face of Chinese advances toward unification. They evaluate the strengths and weaknesses of China's three main power resources - economic power, military power, and soft power.

The authors conclude with recommendations for the United States as it seeks to manage China's rise. Chinese policymakers understand that their nation's prosperity, stability, and security depend on cooperation with the United States. If handled wisely, the authors believe, relations between the two countries can produce mutually beneficial outcomes for both Asia and the world.

What listeners say about A Contest for Supremacy

A Contest for Supremacy is a book that could be equally appealing to either researchers on the history of bilateral Sino-American relations, and those interested in contemporary security issues. For the latter category it would be recommended to skip the first five chapters and concentrate on the last six. However, the book in itself is thoughtful and comprehensive, and merits being read in its entirety.
Friedberg takes an approach that seems to be both a combination of Real Politik and an ideological Neo-Liberalist Democracy centric approach.
Friedberg discusses in depth the security concerns of China's neighborhood, and comes to the entirely rational conclusion that the future shape and intentions of China is impossible to predict, and therefore balancing and containment should remain the focus of US policy.
Although Friedberg abstains from predicting any kind of Democratic transformation of China, he nonetheless takes the position that a Democratic China could be less predictable or accomodating of US interests than a One Party China.
Nonetheless, Friedberg still takes the rather ideological position that the US should establish an Asian Democratic Club, similar to Robert Kagan's proposed League of Democracies, as a counterweight to the Shanghai Co-operation Organisation, which Friedberg dubs an autocratic club.
Though this book predates the change of leadership in 2012 and is still in the Hu Jintao era, nonetheless the fundamental security dynamics remain unchanged.
Friedberg's approach is an interesting mix of ideology and political realism, which may not be to everyone's agreement, but nonetheless he provides a very good security centric exploration of Sino-American relations, recommended for international relations or security specialists alike.

It is readable, but the author attempted no insight, off no new prescription, and large built a narrative by cherry picked quotes. In the end he exhorted the US to do what is has done, which he admits to be a born of shorted sighted narrowly self interested born of compromise, but do it better.

Do you think A Contest for Supremacy needs a follow-up book? Why or why not?

Great book. It does hit most of the major points. However, I was a bit surprised it didn't talk more about how China ended up acquiring its first aircraft carrier, the Liaoning, from Ukraine.

Also a funny detail that needs to be corrected. In Chapter 11 at 14:48 minutes in the narrator says "Since the end of the gulf war, PLA planners have been paying close attention to the ways in which the United States has used its precision guided musicians". I'm pretty sure he meant to say munitions hahaha.