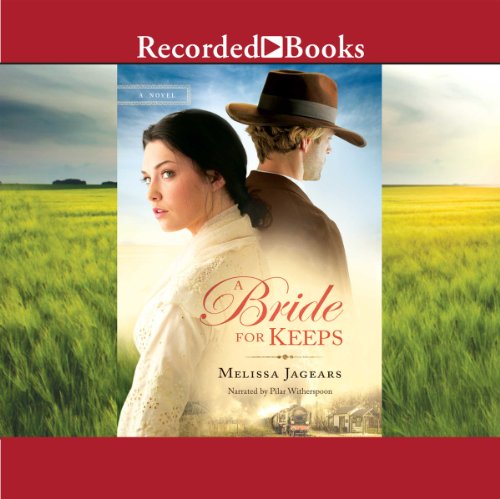 A Bride For Keeps

By: Melissa Jagears
Narrated by: Pilar Witherspoon
Try for £0.00

Although Everett Cline can hardly keep up with the demands of his homestead, he won't humiliate himself by looking for a helpmate ever again--not after being jilted by three mail-order brides. When a well-meaning neighbor goes behind his back to bring yet another mail-order bride to town, he has good reason to doubt it will work, especially after getting a glimpse at the woman in question. She's the prettiest woman he's ever seen, and it's just not possible she's there to marry a simple homesteader like him.

Julia Lockwood has never been anything more than a pretty pawn for her father or a business acquisition for her former fiancé. Having finally worked up the courage to leave her life in Massachusetts, she's determined to find a place where people will value her for more than her looks. Having run out of all other options, Julia resorts to a mail-order marriage in far-away Kansas.

Everett is skeptical a cultured woman like Julia could be happy in a life on the plains, while Julia, deeply wounded by a past relationship, is skittish at the idea of marriage at all. When, despite their hesitations, they agree to a marriage in name only, neither one is prepared for the feelings that soon arise to complicate their arrangement. Can two people accustomed to keeping their distance let the barricades around their hearts down long enough to fall in love?

What listeners say about A Bride For Keeps

Solid first book in a series worth a credit

I have read and listened to something in every category in Audible. Inspirational books are especially calming and I do enjoy listening to authors in this genre. I enjoyed this book, for it has some excellent strengths for example the author’s use of the Story of David threads into the story of the book helps with her character development and moves the story forward. The main story involves Everett who has lost 3 brides to other men and one who died on the train ride to meet him so four brides lost. Then there is beautiful Julia who has both an emotionally abusive father who was pushing her to marry for a business deal to a man who raped her which is why she decided to run away from home, First she works in a inn cooking in the kitchen while she starts corresponding with an interfering but loving neighbor of Everett’s (Rachel) and encourages her to leave Boston for Kansas to become a mail order bride. It is a love story with a depth and breadth not usually seen in romantic fiction. The issues with the writing involved multiple weaknesses in continuity. At times the story jumps so one minute the reader is in the neighbor’s yard and the next at Everett’s. During all the months of correspondence that went on between Rachel and Julia what did they say to each other? Since, Julia did not know about any of the four failed brides’ stories, which did not ring so true to me and this could have been help with better editing so I do not hold the writer at fault for this flaw in its entirety. Also with regards to the plot, Julia’s story at least in part should have been partially known by Rachael who seemed so clueless about Julia’s background other than she was from Boston. Why someone wanted to leave a wealthy Boston family existence should have been something Rachel would have been at least concerned about. The use of the correspondence written between the women and the use of Rachel telling parts of Julia’s story would have lessen the repeating of each main characters story over and over so that it didn't sound like self absorbed whining and more like self reflection when it was self reflection in the story. Also about the lovely dresses and the inn job how did she work in them there? See what I mean, that continuity in the story does not follow.Julia would have had some work dresses made by then and wouldn't Rachel had suggested such too? Nevertheless, I did like this book and the writing/editing flaws aside it was worth listening to and I hope this writer continue to hone her craft.

it's was a good listen. I'm a realist in some ways and listening to the story some of the thought process the characters went through seemed ridiculous but otherwise it ended well

This is such a good story. I only got 5 hours of sleep 2 nights because I didn’t want to stop listening! Oh well, I’ll catch up on the weekend, haha. The heroine did grate on my nerves at times with her stubborn coldness but it was real for the situation she had lived through. The hero? I felt like he was a real person. I wanted to give the poor guy a hug & tell him it would be okay...that is weird & I’ve never felt like that about a character before. That’s just how good it is. I absolutely loved the scripture & lessons in this story. Pilar was great as usual.

I liked the narrator, the story was okay it just seemed to run around in circles, I would have preferred to read more about how she came to let go of her past and truly love again, I think there was too much time spent on miscommunication which kind of drove me crazy.

Such a beautiful love story. I feel like my heart grew warmer after listening to it . I cried for them both and especially when he prayed for her . They both are are made perfect 😊

A bride for keeps

I enjoyed that it had an nice wholesome feel. It dealt with forgiveness and the love of God and it was just a great read

Finally, A Bride for Keeps!

I read the book a few years ago and wanted to revisit this story because I loved it so. I'm very glad it is available on Audible!
The most memorable part for me is when Everett finally gets Julia to understand that God loves her, no matter what. Also when Julia follows Everett to the barn.

I thought the narrator did a good job with all the voices with the exception of Rachel, she sounded more like a man than a woman.

Enjoyed storyline and character development. I will be reading more from Jagears! Kudos to writer and plot.

I've read yhe story before and enjoyed the play of flawed people learning to love and be loved. The narration was good, but not spectacular. At times the story seems to lag, but I suspect that might be me more than the book itself. I am not always patient.