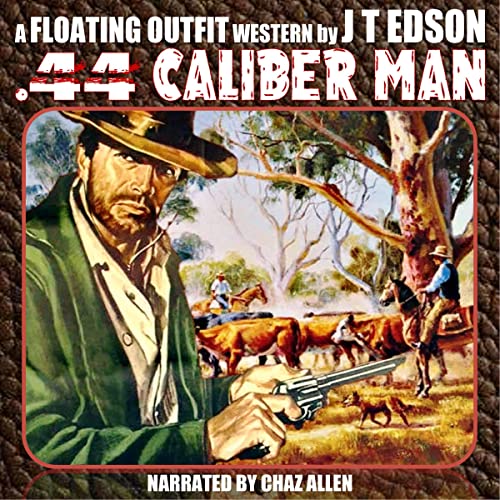 The Flores brothers thought they were very smart. Vicious, evil bandidos, they laughed at the law. They laughed, too, when they first saw Colin Farquharson, for they had never come across a kilted Scotsman before.

“What is it, a man or woman?” one of them whooped.

Seconds later Adàn Flores lay dead, and though he escaped immediate retribution, from then on the Flores gang had one idea in mind—the killing of Colin Farquharson.

John Thomas Edson was born at Worksop, Nottinghamshire, on February 17, 1928, the son of a miner who was killed in an accident when John was nine. He left Shirebrook Selective Central School at 14 to work in a stone quarry and joined the army four years later.

As a sergeant in the Royal Army Veterinary Corps, Edson served in Kenya during the emergency, on one occasion killing five Mau Mau on patrol. He started writing in Hong Kong, and when he won a large cash prize in a tombola, he invested in a typewriter.

On coming out of the army after 12 years with a wife and children to support, Edson learned his craft while running a fish-and-chip shop and working on the production line at a local pet food factory. His efforts paid off when Trail Boss (1961) won second prize in a competition with a promise of publication and an outright payment of £50.

The publishers offered £25 more for each subsequent book, and with the addition of earnings from serial-writing for the comic Victor, Edson was able to settle down to professional authorship. When the comic's owners decided that nobody read cowboy stories any more, he was forced to get a job as a postman (the job had the by-product of enabling him to lose six stone in weight from his original 18).

Edson's prospects improved when Corgi Books took over his publisher, encouraged him to produce seven books a year and promised him royalties for the first time. In 1974 he made his first visit to the United States, to which he was to return regularly in search of reference books. He declared that he had no desire to live in the Wild West, adding: "I've never even been on a horse. I've seen those things, and they look highly dangerous at both ends and bloody uncomfortable in the middle. My only contact was to shoot them for dog meat."

His heroes were often based on his favorite film stars, so that Dusty Fog resembled Audie Murphy, and the Ysabel Kid was an amalgam of Elvis Presley in Flaming Star and Jack Buetel in The Outlaw.

Before becoming a recluse in his last years, JT's favourite boast was that Melton Mowbray was famous for three things: "The pie, Stilton cheese, and myself, but not necessarily in that order."

What listeners say about .44 Caliber Man

I love these Edson books, so there's never going to be a negative comment. It's especially gratifying to have an audiobook available finally. The second book in the series is an average affair compared to the superior first book in the Floating Outfit series featuring the Ysabel Kid. Solid western action with an intriguing guest
character in the Scottish highlander Colin Farquarson. But it didn't quite hit the spot with me for a higher rating.

Great to see another JT Edson book out on Audible, I hope there are more to come.
Chaz Allen did a brilliant job of narrating, his Scottish Brogue was spot on.