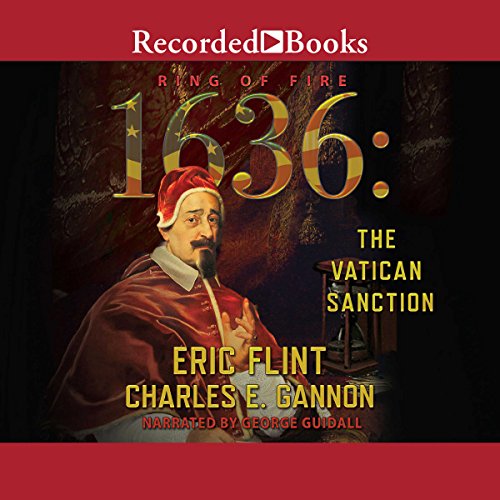 It's spring in Burgundy. The flowers are out and so are the cardinals - of Pope Urban's renegade papacy, now on the run from the Vatican's would-be usurper Borja. Most of the Church's senior leaders have converged upon the city of Besancon, where the Pope plans to offer an ecumenical olive branch to the other Christian denominations with which Rome has been at war.

Fortunately, Urban has up-time help. He can rely upon Cardinal-Protector Larry Mazzare's theological savvy, Sharon Nichols' medical skills, and her husband Ruy Sanchez's keen-eyed experience as a bodyguard-in-chief. And even though Urban has a new Papal Guard in the form of Owen Rowe O'Neill's Wild Geese, Mike Stearns has loaned the Pope a small contingent of the Hibernian Battalion - just in case.

Which is prudent, since Urban and his peace initiative are not merely at risk from Borja's assassins. There is another, more deadly, team of professional killers in town, directed by the man who almost killed the Pope before: lethal Spanish mastermind Pedro Dolor.

What listeners say about 1636: The Vatican Sanction

The worst of a great series

I am a great fan of the Ring of Fire series and there are some great reads on the series written by some outstanding authors; this isn't one of them! some of it is grindingly boring going into far too much detail the plot is very weak and the characterization bad characters which appeared in other books of the series were made to appear simply boring.
Eric Flint made a mistake to allow his name to be associated with this book its clear from anyone who knows his work he had little or no input to the writing of it.

Piss poor narrator emphasizes every 5 th word make the story all but impossible, to follow waste of money!

12 hrs of religion etc, 2 of assassination attempts, the rest cleanup and sleuthing. Not the best one in the series. Didn’t really feel connected to the characters. Narrator has great foreign language pronunciation but sounds like a boring grumpy old man...not my favourite narration style. Really wish they’d mix up narrators on these at least occasionally.

best parts were when Cardinal and clergyman talk. the mystery was long and drawn out. secondary Spanish characters were hit or miss most time.

Usual excellence expected from these authors and narrator. Sound quality had a problem in a couple of spots in the second half, especially around 3 hours from the end. Most noticeable was a cyclic variation in the volumn, similar to that heard on ageing cassettes near the end of the tape.

While there is some action and intrigue, it is primarily a political/ecumenical thriller. If you are not a history buff, or don't have a basic understanding of religious strife in Europe of the era, you will find yourself quickly lost. Even reading a few articles on the era and it's religious strife will help with background, as will an understanding of what Vatican 2 is and it's significance to the Catholic Church.

One of my greatest thrills is to dig deeper into elements of Eurpean and American History that I had not encountered before. Yet, I continue to see this as a continuing complaint by many readers. In a Google era such ignorance is inexcusable.

its agreat political thriller set in the grantville universe. The characters are fun and interesting. The narrator as always makes his characters stand out and has a warm candor to his narration. I like the continuing theme of how its the ideas are more important than the tech that has long impact on the society.

Another entertaining installments of th Ring of Fire saga.
Now for the next good read.

For established Ring of Fire fans this was a treat

An established fan may enjoy this as a continuation of one of my personal favorite spinoff, the ecumenical fallout of Grantville's appearance. it is slow at points but not enough to make me put the book down.

For newbies, recommend reading of previous books is a must to get the full potential of the story and implications.